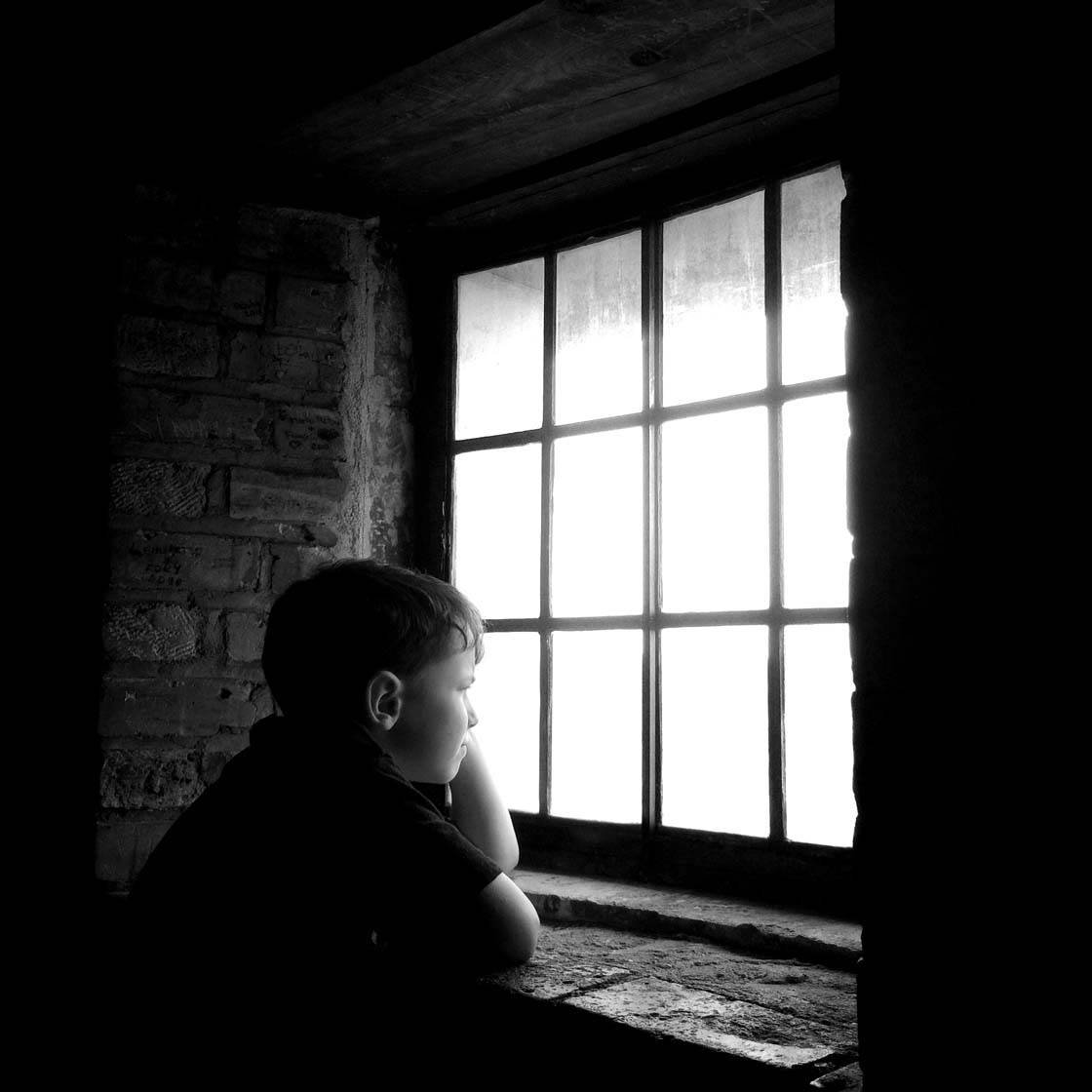 Many of the apps in this list have much broader uses as well, but in this article we’ll be focusing solely on their abilities with regard to black and white images. 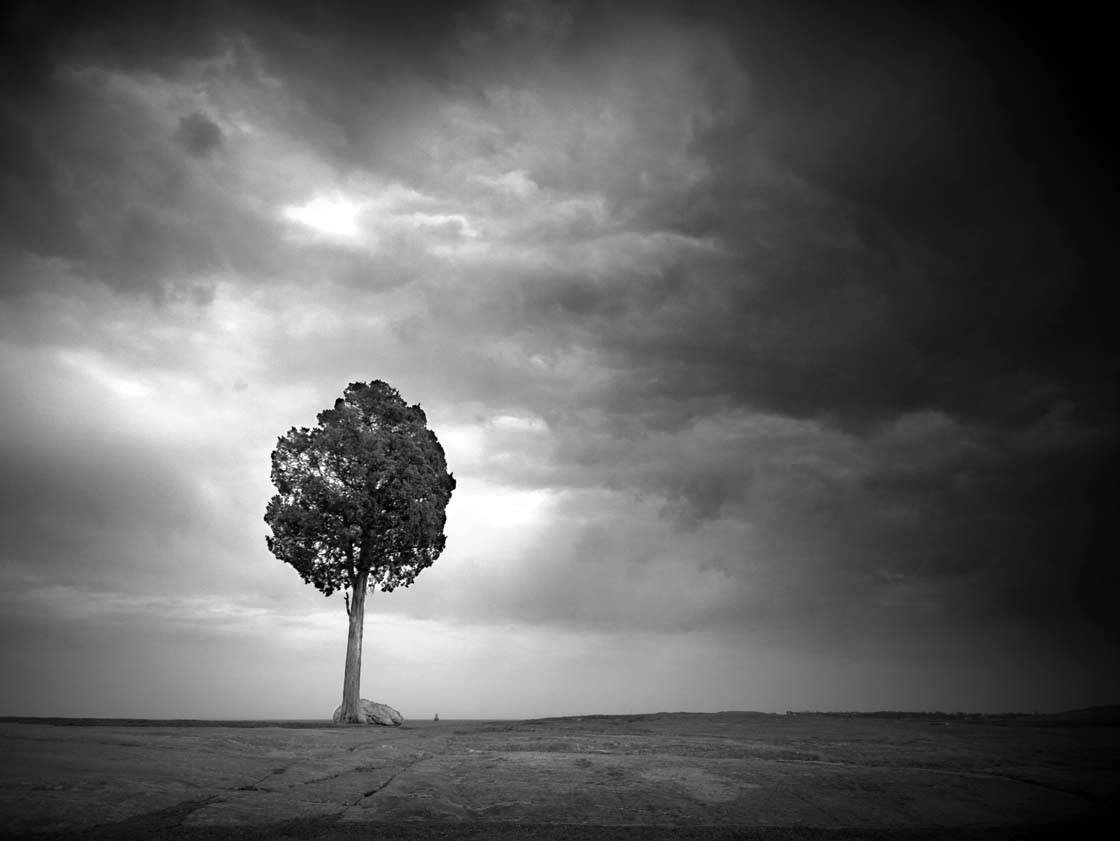 Shooting in color has the obvious benefit of giving you more choice. If you convert it to black and white, you’ll still have the color image in your Camera Roll as well. It does mean spending a few more moments removing the color using an editing app, but this is a simple process and can be done in many apps. 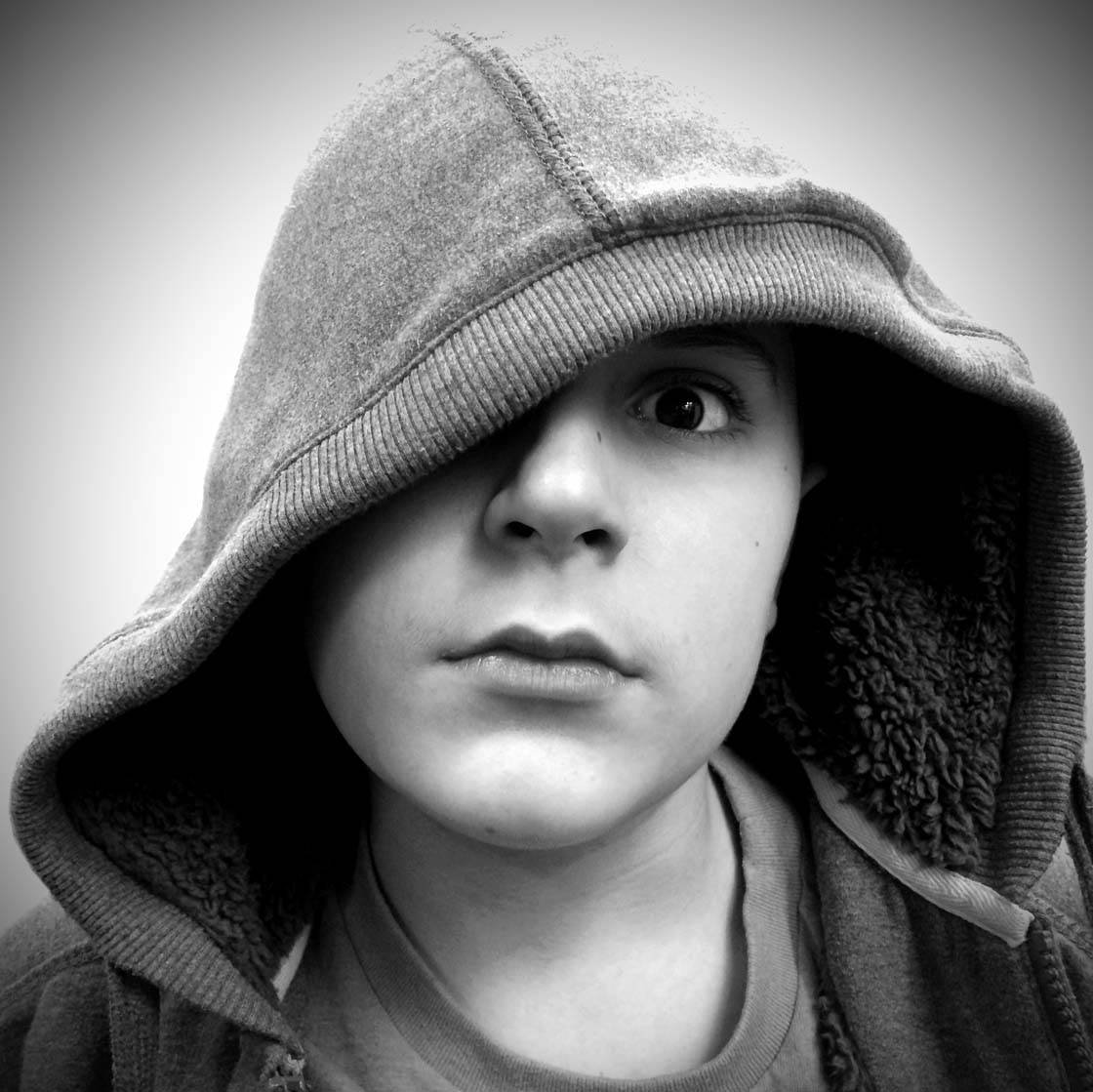 The benefit of shooting in black and white to start with is that you have your black and white photo as soon as you press the shutter button. You don’t have to take the extra step of removing the color in post-processing. However, bear in mind that you won’t have a color version of that photo in your Camera Roll.

If you’re confident that your photos are going to look good in black and white, and you know you won’t want them in color, using a camera replacement app to take black and white photos right from the start can be a good option. 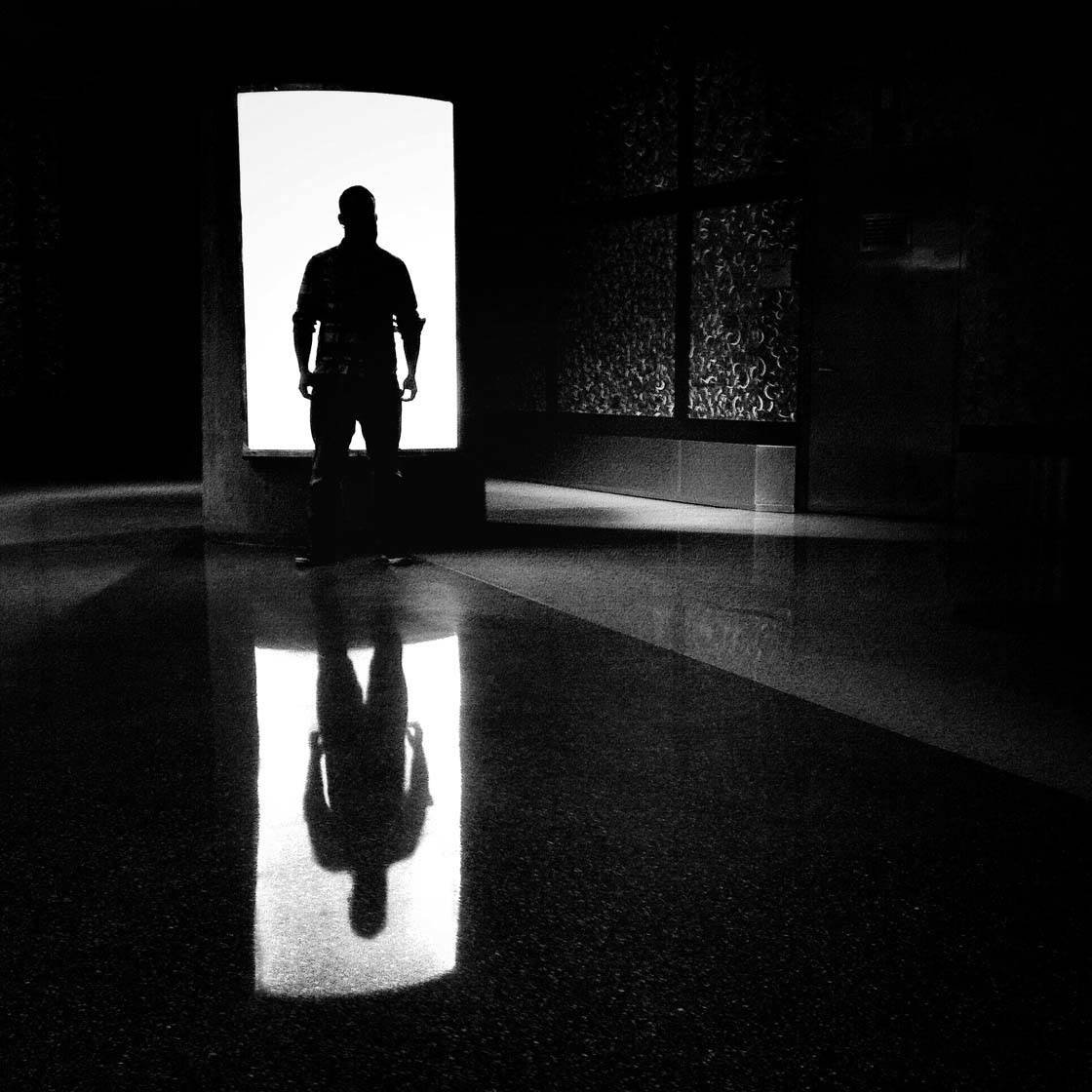 We’ll take a look at a few camera replacement apps first, then move on to the best editing apps and photoshop apps for creating black and white images.

Provoke Camera ($0.99) was designed to reflect the black and white stylings of Japanese photographers of the late 1960s, like Daido Moriyama, Takuma Nakahira and Yutaka Takanashi. It offers a simple, straightforward design for taking only black and white photos.

Provoke Camera lets you choose from six great black and white film styles, shown at the bottom of the screen. All of these are offered as “live view” features, so you can see how your image is going to look before you snap the photo. 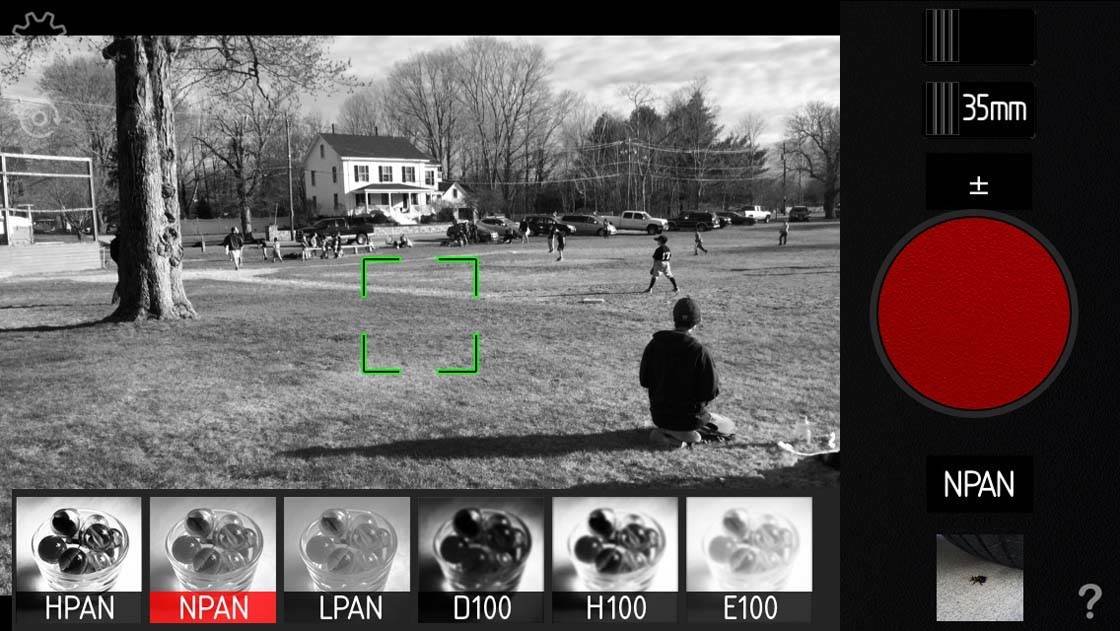 While the app does offer some control over the look and feel of the images captured, they all feature that gritty, grainy, and even somewhat blurry (depending on the chosen setting) look reminiscent of the “Provoke” era of photography.

In addition to functioning as a black and white camera app, Provoke Camera will also allow you to import photos from your Camera Roll and apply any one of its “Provoke” effects to convert it to a black and white image.

Like more and more camera apps these days, Provoke Camera also offers the ability to capture and save images in the higher quality (and larger file size) TIFF file format.

Lenka (free to download) is another black and white camera app that’s designed with a very simple interface. Developed in France by world renowned photographer Kevin Abosch for professionals and amateurs alike, Lenka allows you to create beautiful black and white photographs with a bare bones, yet powerful set of features. 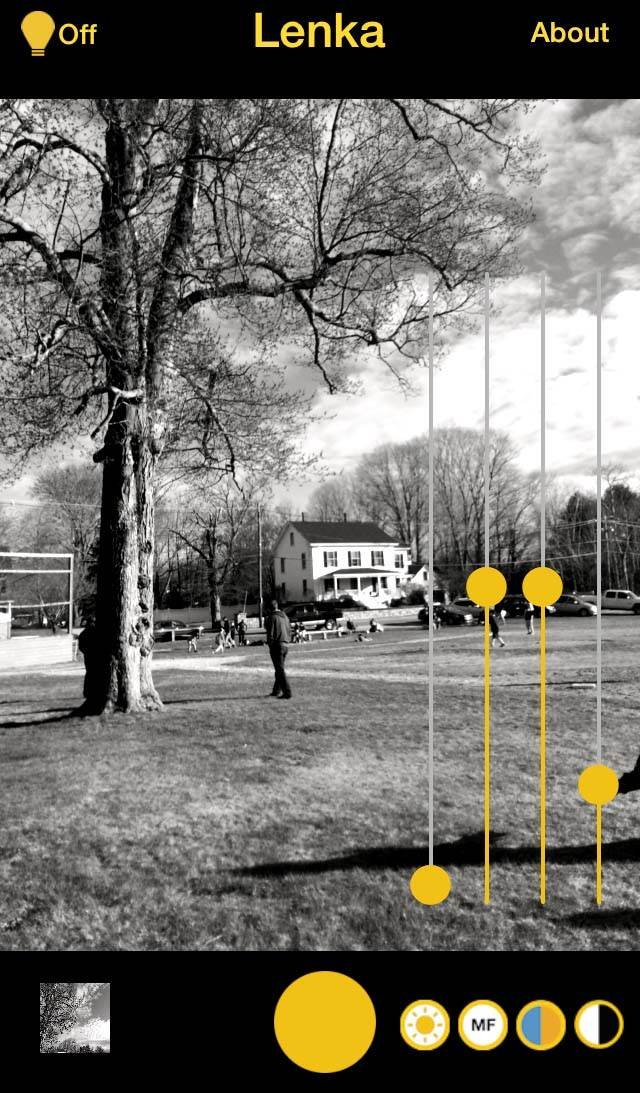 The philosophy behind Lenka is that you should spend most of your time composing your image and developing your “vision” as opposed to distracting yourself with multiple camera settings. Features of the Lenka app include:

In keeping with the spirit of the app, Lenka doesn’t allow for flash photography (only the use of your flash LED as a continuous light source) or the use of your front facing (lower resolution) camera. These are creative decisions which speak to the artistic philosophy of the app’s developers.

While Lenka may not offer as much technical control as other apps, it does do an excellent job of maximizing the black and white tonal range of your iPhone. Most images, if properly exposed, tend to have bright whites, deep blacks, and a wide range of midtones, all of which combine to make high-quality black and white photos.

These two apps (from the same developer) are already classics in their own right, and if you’ve used either of them, you’ll know that they offer a wide range of black and white “film” options. 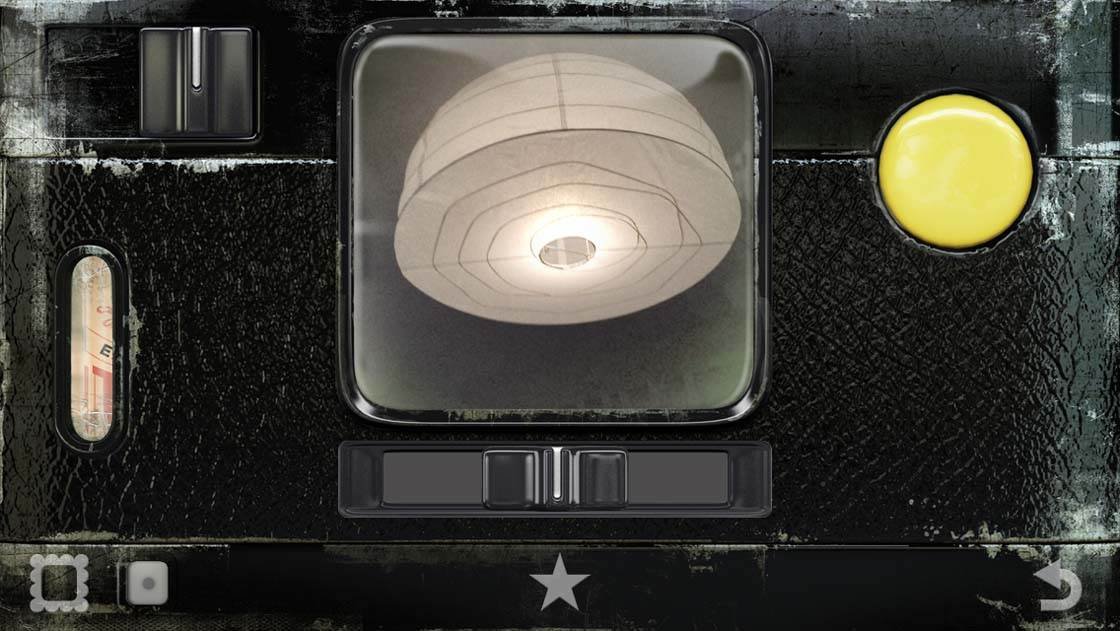 Hipstamatic ($1.99) functions much like the previous two camera apps (Provoke and Lenka) in that you select the style of black and white photo that you wish to take (by choosing a “film” and “lens” combo) BEFORE taking the actual photo. 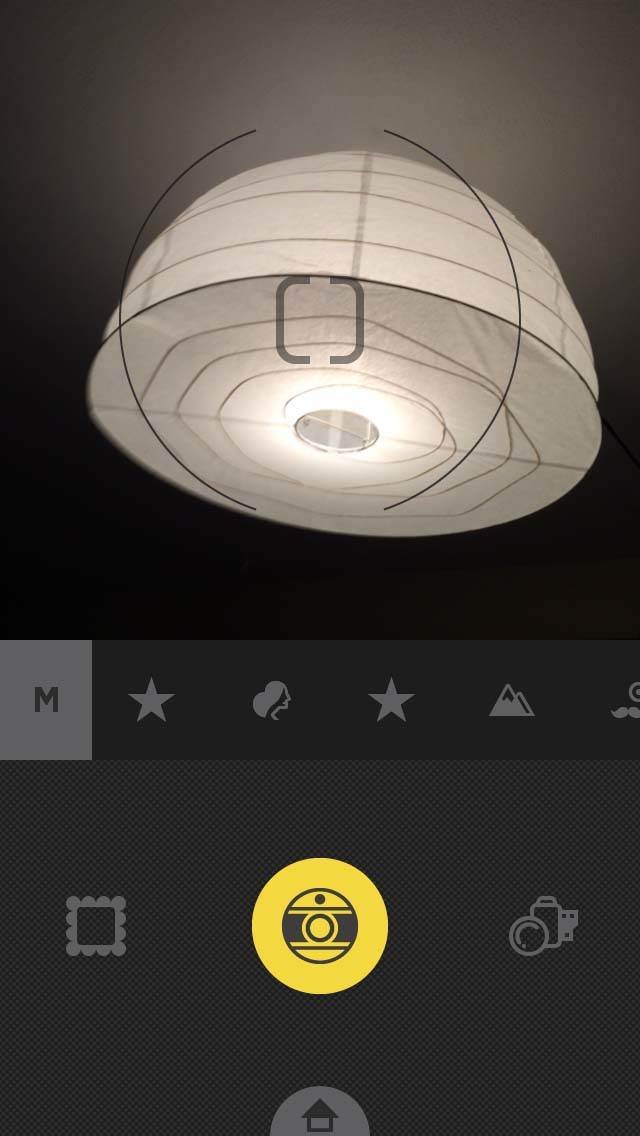 OGGL (free to download) also functions in this manner, but in addition it allows you to change the film and lens settings for individual photos AFTER you’ve taken them, thereby allowing you to experiment with different settings after capturing a shot that you’re happy with.

OGGL also allows for the importing of photos taken with other camera apps and then applying OGGL’s film and lens filters to them. 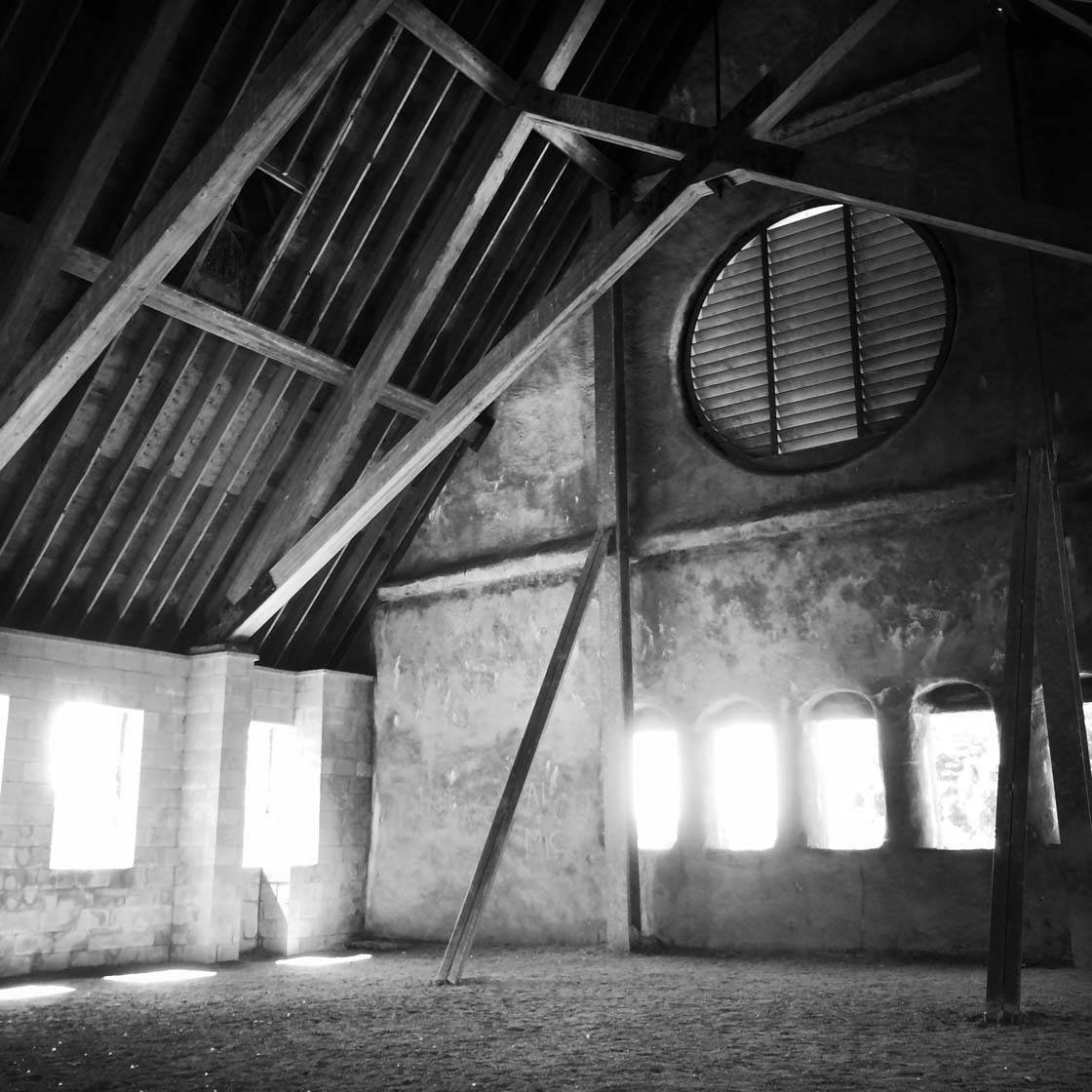 Much can be said about each of these apps as they offer many more options than the other apps discussed so far. For a more in-depth look at these apps, check out our tutorial on how to take great black and white iPhone photos with Hipstamatic and OGGL.

One last camera replacement app that’s worth considering if you wish to focus on black and white photography is Hueless ($1.99).

Like Provoke and Lenka, this app only lets you take black and white photos, but it offers a wider range of settings making it a more full-featured camera replacement app. It just doesn’t allow you to shoot in color! 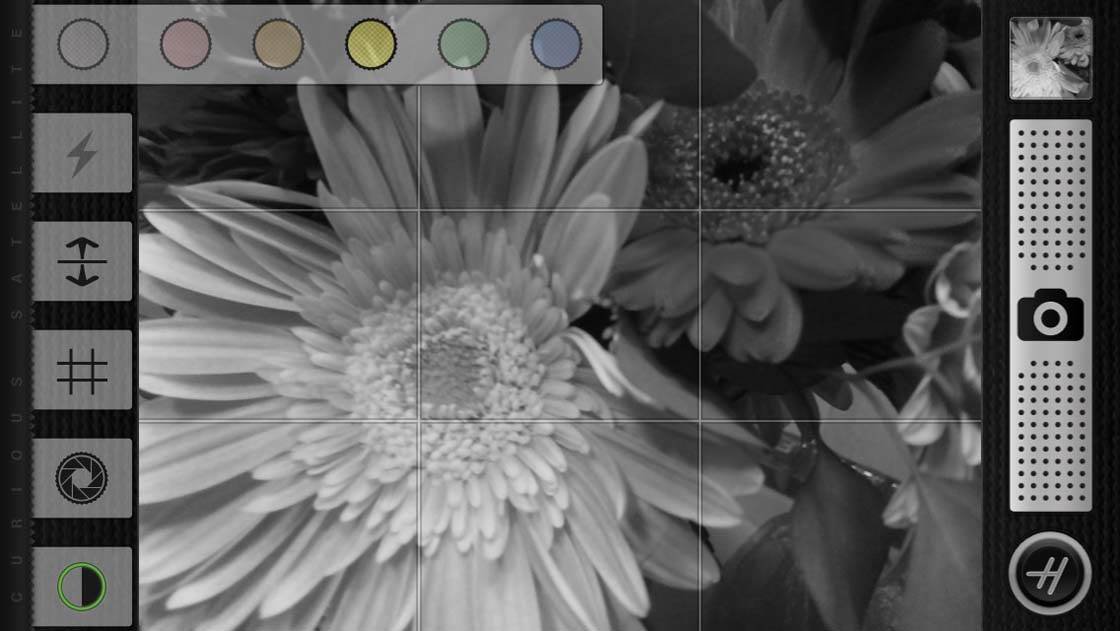 One feature in particular that helps Hueless stand out from the other apps is that it allows you to select from various colored “filters” (red, yellow, orange, etc.) that mimic using actual colored glass filters on a DSLR camera to affect the tonal contrast of the resulting black and white image. 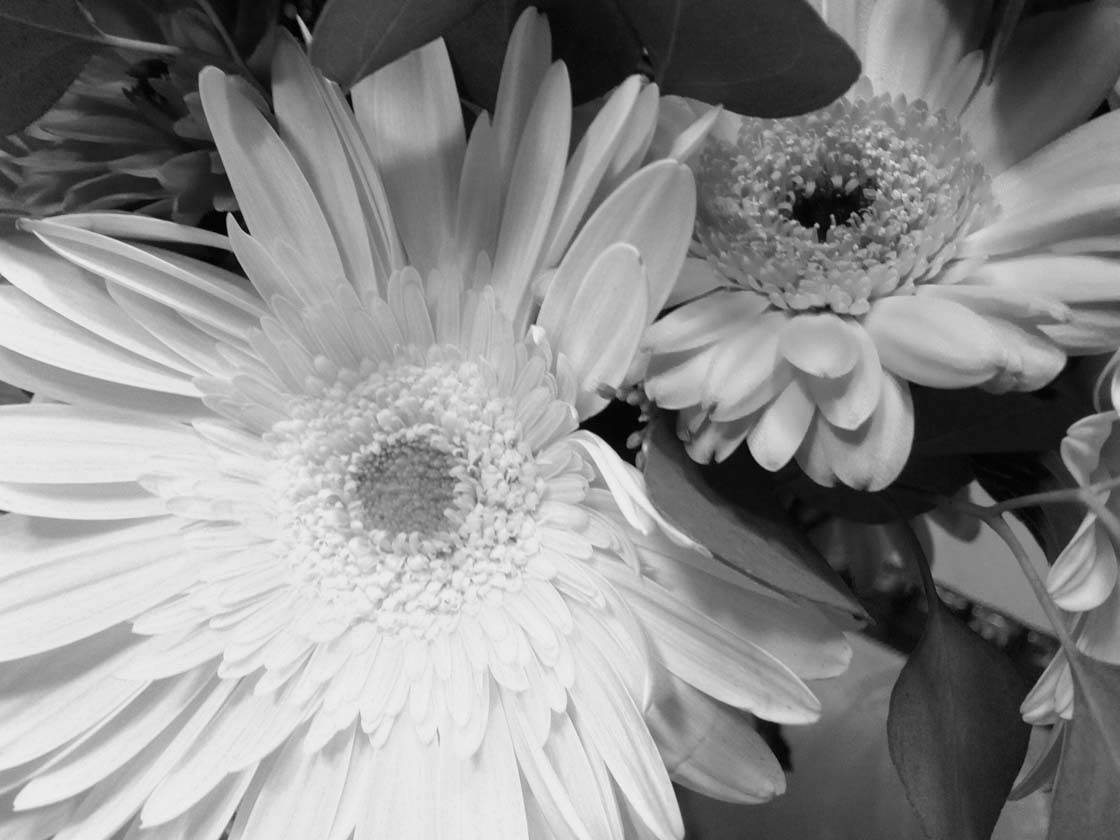 For example, selecting the red filter will cause all red elements in your photo to appear as bright white in the resulting black and white photo. Simultaneously, it will darken other hues thereby rendering a high contrast black and white image.

If you’re already familiar with using actual lens filters in this way, then you may find this aspect of Hueless to be both familiar in nature and highly effective. Other features of the app include:

If you like the features and approach offered by Hueless for black and white photos, the same developer offers a very similar camera replacement app called Huemore ($1.99) for taking color photos.

Now let’s turn to a few apps for turning your color photos into black and white images in post-processing.

Monokrom ($0.99) offers a unique approach to post-processing photos. Instead of standard editing controls, it utilizes a set of circles that can be slid around on the screen to affect the exposure and contrast of your image in a unique and fun way. 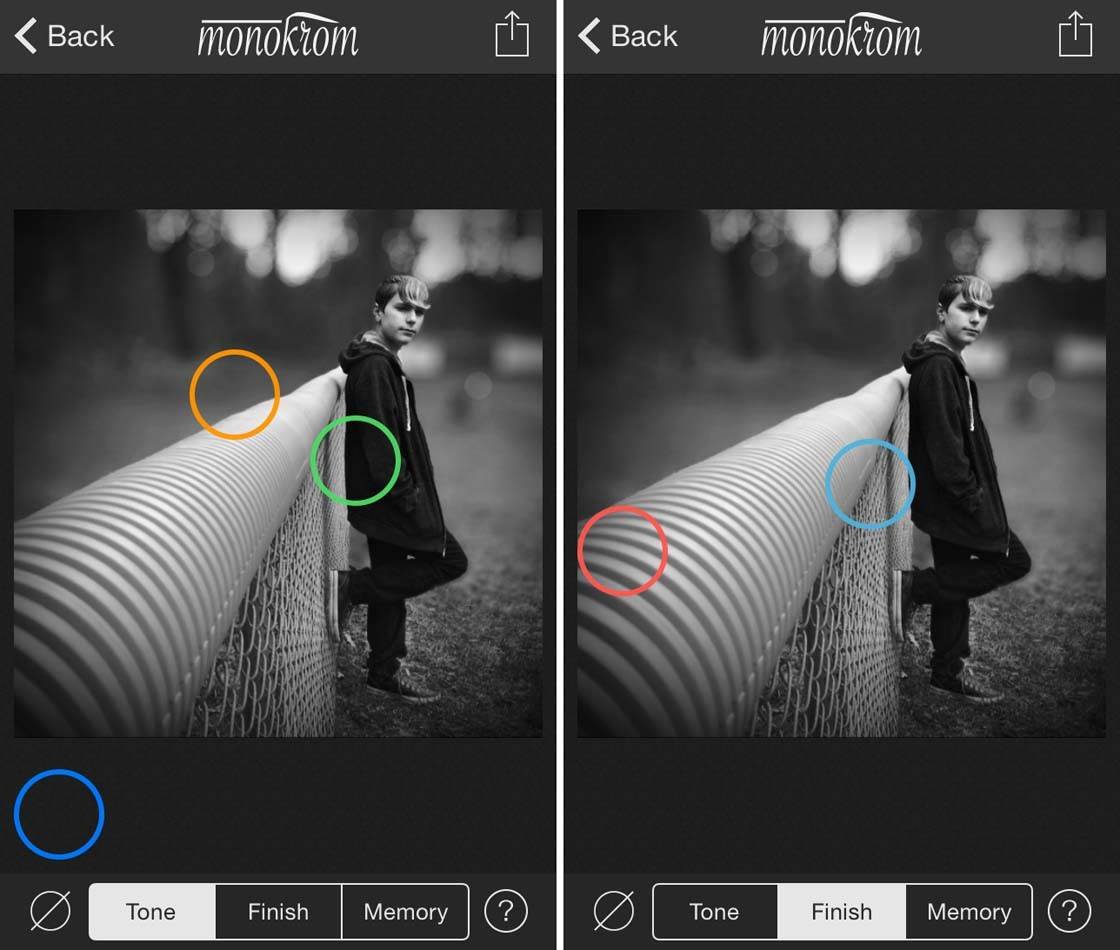 Honestly, Monokrom functions in such a unique way that it really has to be tried first-hand to understand how it works.

While the app’s unique approach may not be as predictable and precise as other editing apps, it offers an interesting element of “predictable” randomness that makes for a truly unique editing experience. You can watch a demonstration video to see how the app works here.

This app features a range of different black and white photographic styles that you can work with, including Black & White – Classic,  Infrared Photo – Modern, and Dramatic Black & White – High Definition. 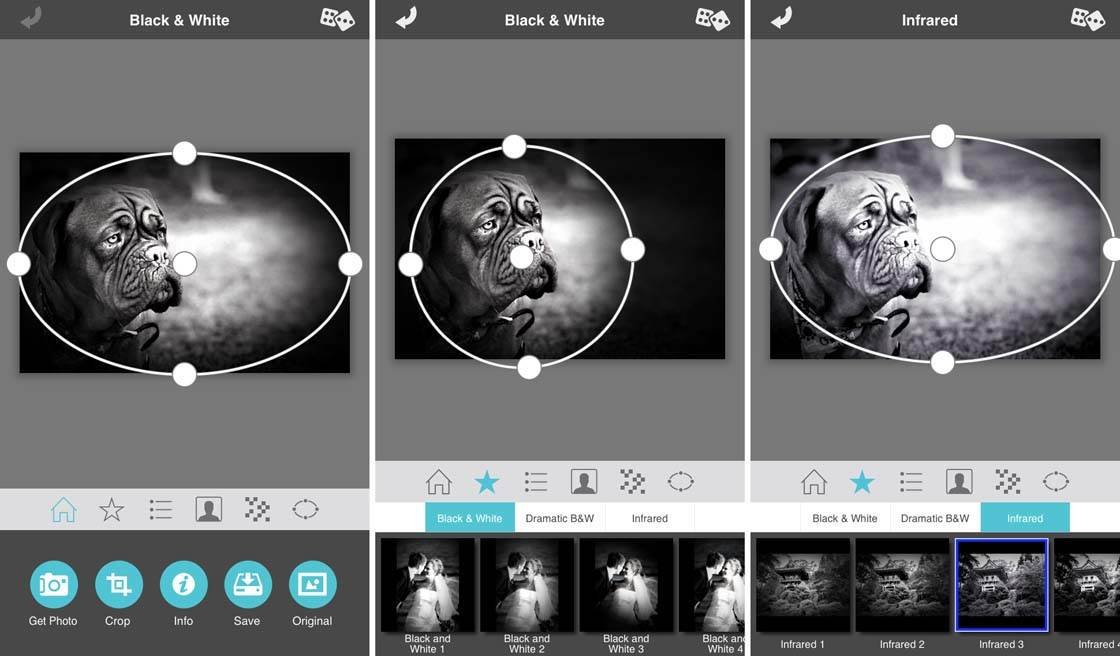 One unique feature offered by Dramatic Black & White is an ellipse spotlight tool that allows you to add a light source to a particular subject in your composition. Fully customizable controls allow expert adjustments to contrast, light, texture and shape, as well as adjustments to spotlight size intensity. Additional features include:

If you’re interested in a full-featured editing app that specializes in creating black and white photos, Dramatic Black & White is certainly one that you should consider.

Snapseed (free to download) has long been a favorite editing app for iPhone photographers, and one of the best things about it has always been its simple, yet effective features for converting your color photos to black and white. 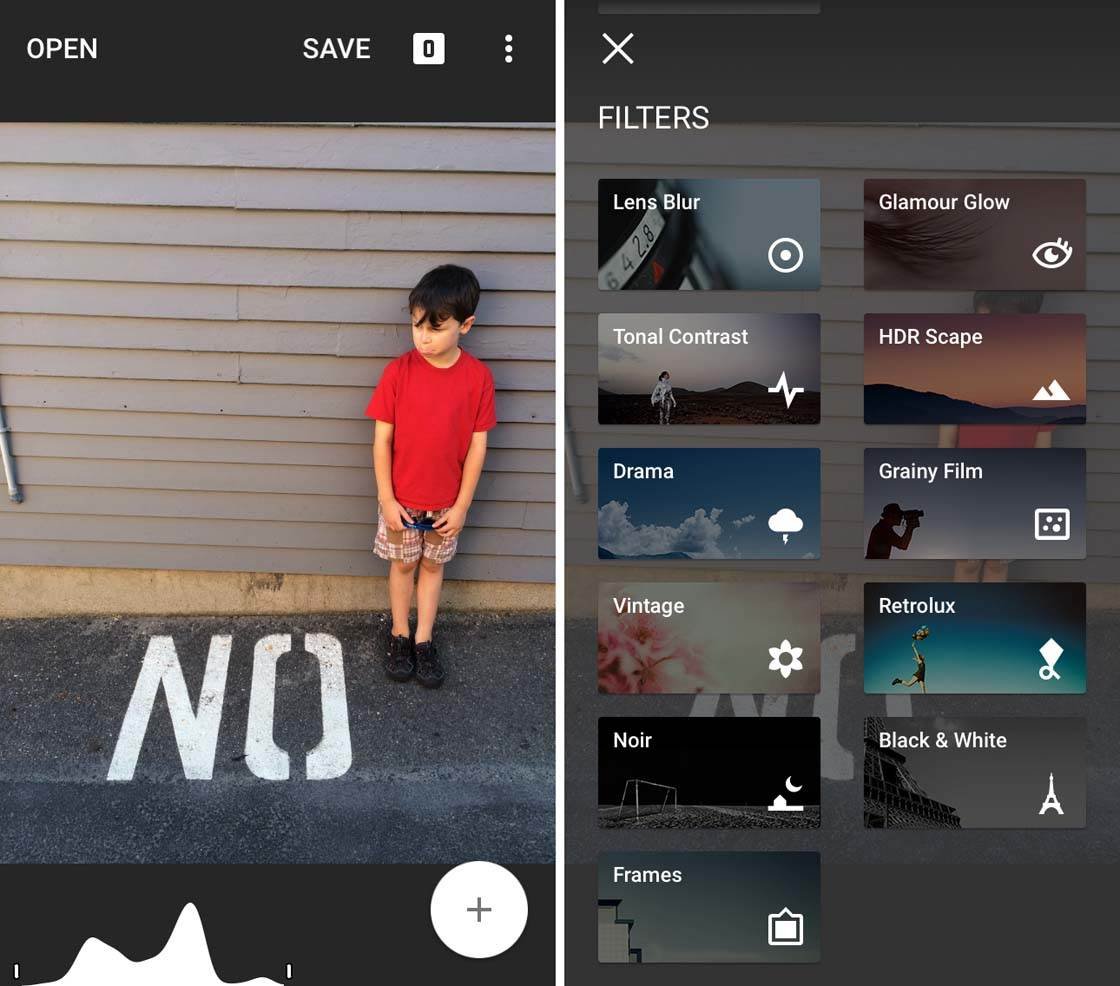 Similar to the Hueless camera app, one of the things about Snapseed that I’ve always liked is the app’s use of simulated lens filters for adjusting the tonal contrast of your photos when converting to black and white. 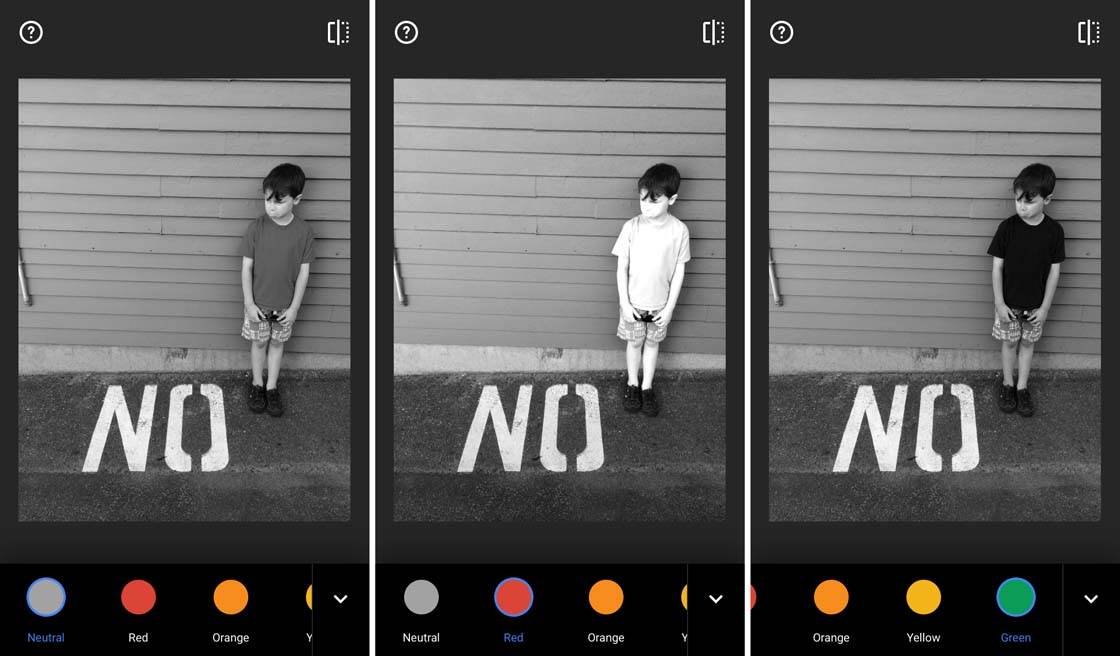 The brand new version of Snapseed continues in this same tradition. Additionally, many of the other new tools, such as the Tonal Contrast feature, make the new version an even better app for use in converting your images to black and white.

Click here for a complete guide to using the Snapseed app to edit your iPhone photos.

No discussion of creating black and white photos would be complete without mention of my go-to app, Filterstorm Neue ($3.99). I use this app for almost all of my black and white iPhone photos. 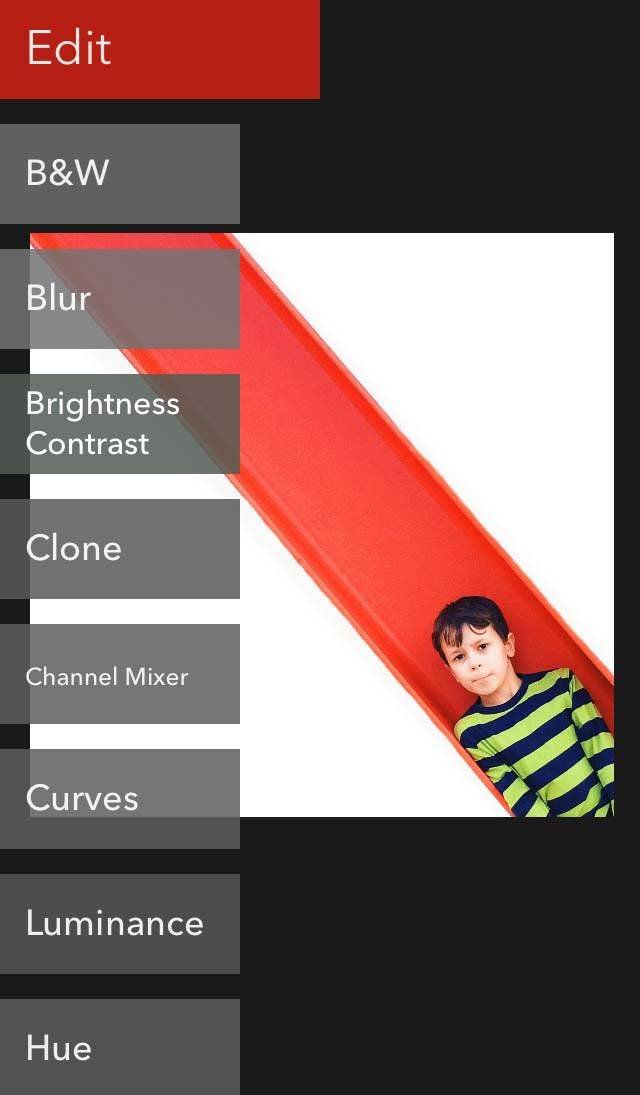 This is one of the more full-featured and powerful editing apps available for iPhone photography. While it offers an extensive range of editing tools for all manner of post-processing, I particularly like the creative control it offers when converting color photos to black and white.

Filterstorm Neue’s black and white conversion tool functions much like other, more expensive desktop editing apps, such as Lightroom and Photoshop. 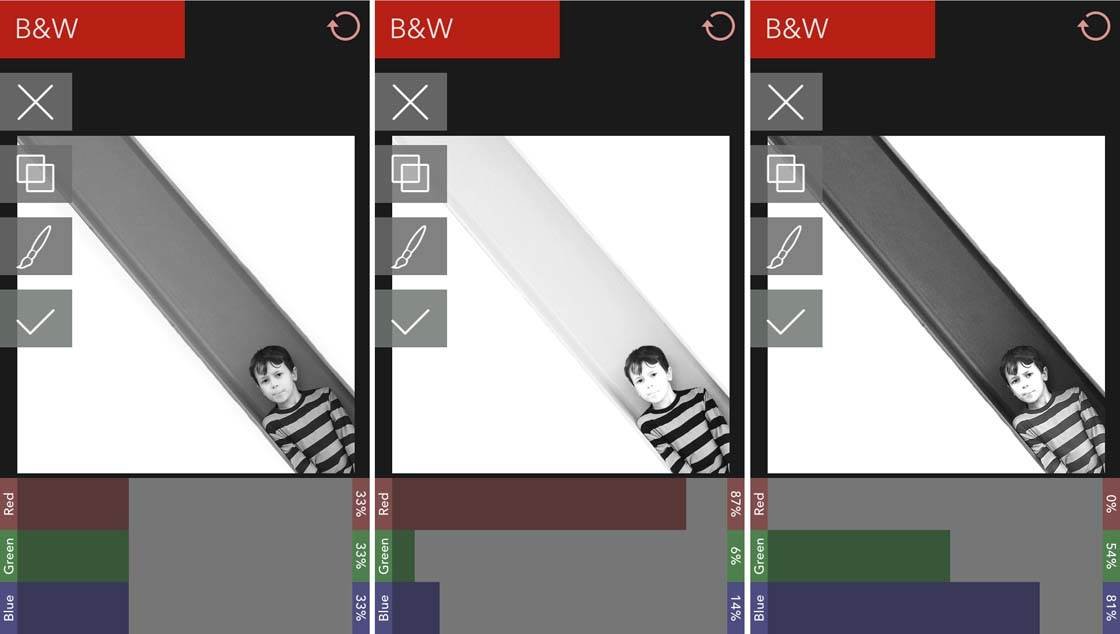 After selecting the B&W tool from the Edit menu, you can adjust the red, green and blue levels to affect how each of those hues will be rendered (darker or lighter) in your black and white version.

For example, if you have a bright red object in your color photo, by adjusting the red slider in the B&W conversion tool you can make that red object appear almost stark white or nearly black.

Ultimately, it all comes down to what works for you and your personal approach to editing photos, but even for the “steep” cost of $3.99, Filterstorm Neue provides you with a suite of editing tools worth more than ten times that cost.