Composition is the key to getting your iPhone photos noticed. Anyone can point a camera and take a photo, but it takes a more skilled photographer to compose a shot that’s visually appealing and holds the viewer’s attention. In this tutorial you’ll discover 10 of the most important composition guidelines to help make your iPhone photos stand out.

Composition is simply the way you arrange the key elements or subjects in a scene. With each photo that you take, you should ask yourself the following questions:

With these questions in mind, let’s take a look at ten important composition techniques to help improve your iPhone photos.

1. Include A Focal Point

A photo should include a main subject or point of interest. This focal point gives your photo meaning and offers the viewer a place for their eye to rest. Without a focal point your image is unlikely to hold the viewer’s attention for long.

When taking photos, always ask yourself “What is the main point of interest in this scene?” or “What is my main subject?” Including a focal point is often easy, but sometimes you need to search out an interesting subject to include in your scene. 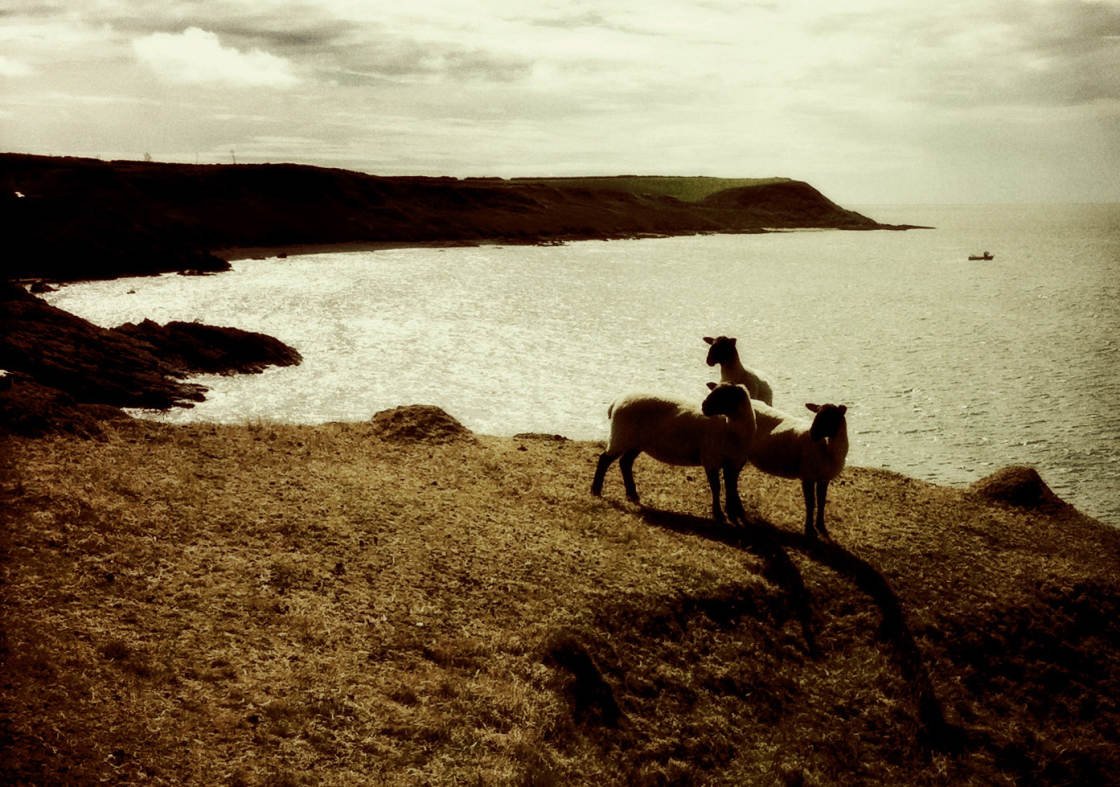 The sheep in this image provide a focal point. Without them the photo would be a pretty boring landscape and wouldn’t hold your attention for long. The sheep provide a place for your eye to rest once you’ve looked around the image.

Once you’ve identified a main subject or point of interest, you can then build your composition around that focal point to draw attention to it. The following composition techniques will help you with this.

The rule of thirds is all about where you position the main elements in a scene. The rule (which is really just a guideline) suggests that an image will look more balanced and aesthetically pleasing if you position important parts of the scene off-center.

Switch the gridlines on in your iPhone’s camera app to display two horizontal and two vertical lines. The rule of thirds suggests that the most powerful areas of the image are the four points where the lines intersect, and that our eyes are naturally drawn to these areas first. Position your main subject on one of these intersections to give the most emphasis to your subject. 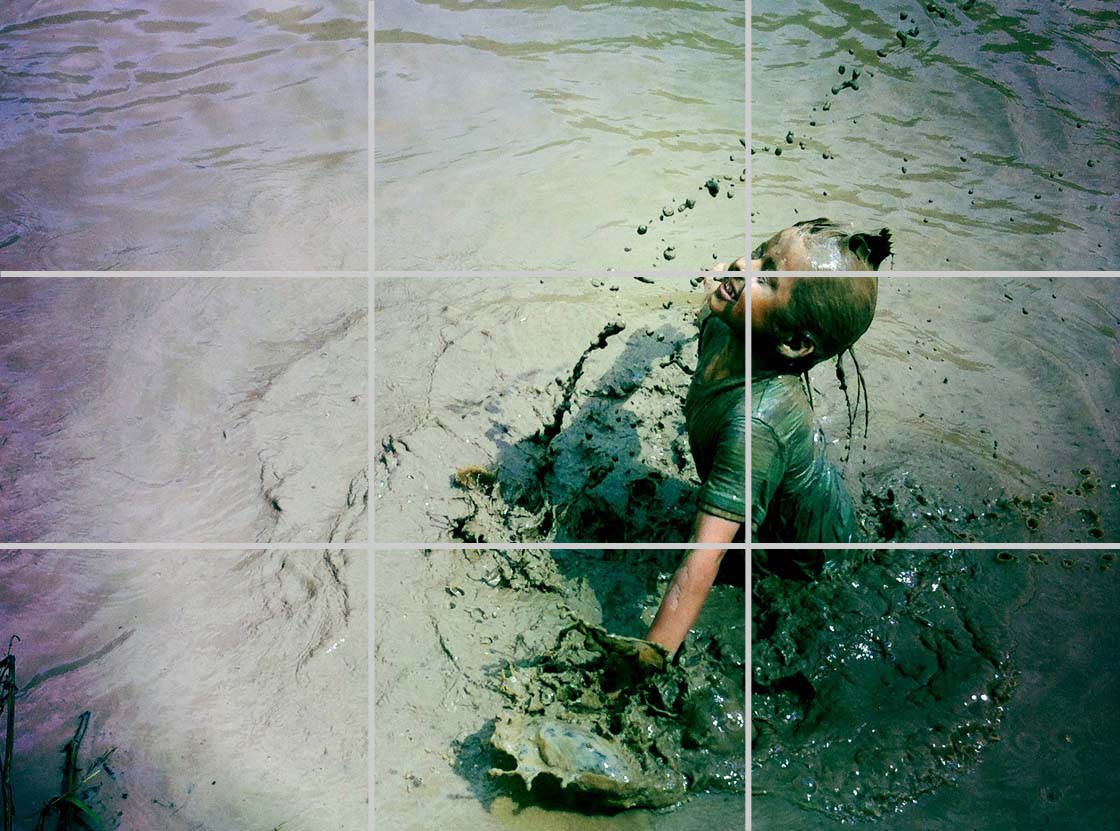 The most important part of the above photo is the child’s face. Following the rule of thirds, the face was positioned on the top right intersection. While it’s best to apply the rule of thirds when you’re taking photos, you can also do it by cropping the image afterwards. 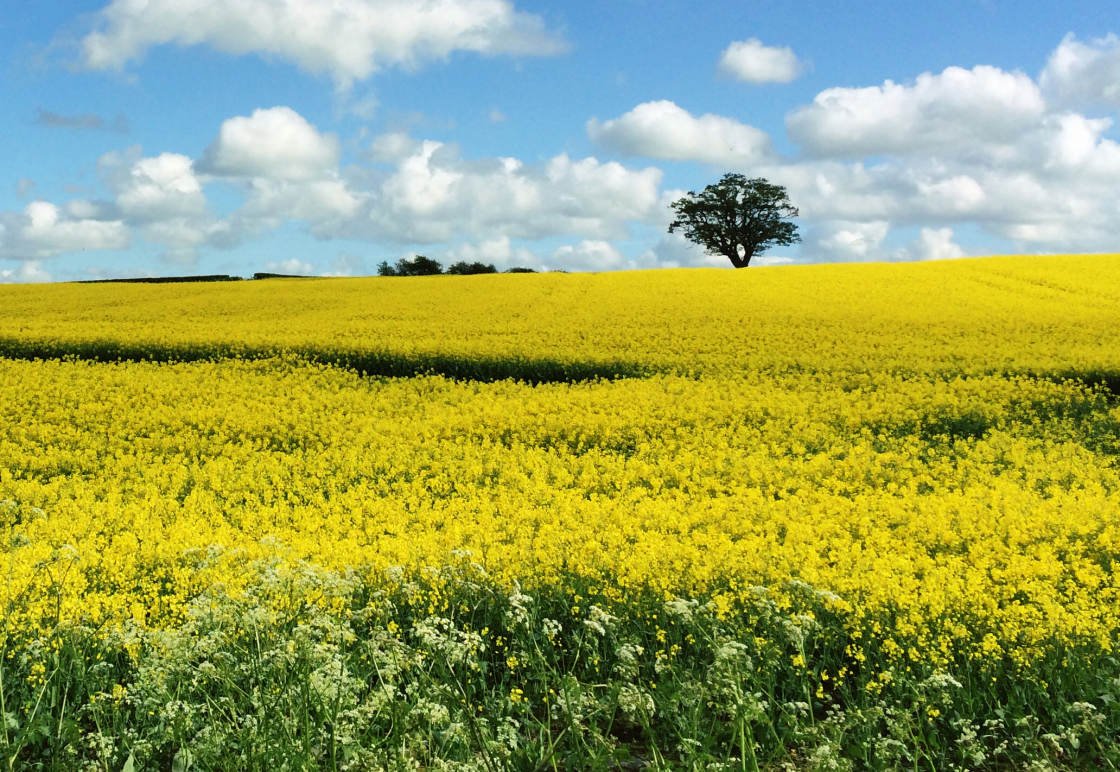 In this photo, I positioned the main focal point (the tree) where the top right intersection would be. The rule of thirds also suggests that the most important lines in a photo (both horizontal and vertical) should be placed along the gridlines. So I’ve placed the horizon along the top horizontal gridline, and the “line” that separates the green and yellow areas at the bottom of the photo roughly corresponds with the position of the bottom horizontal gridline.

Using the rule of thirds to place your main subject off-center creates a more interesting and harmonious composition, but it may leave an empty space in the scene resulting in an unbalanced image. You can balance the “weight” of your subject by including another object to fill the space.

If all the important areas of an image are located either at the top or the bottom, or on the left or the right, the image will look unbalanced. When taking photos, imagine a diagonal line drawn from one corner of the image to the opposite corner, and then place the main subjects along this line. 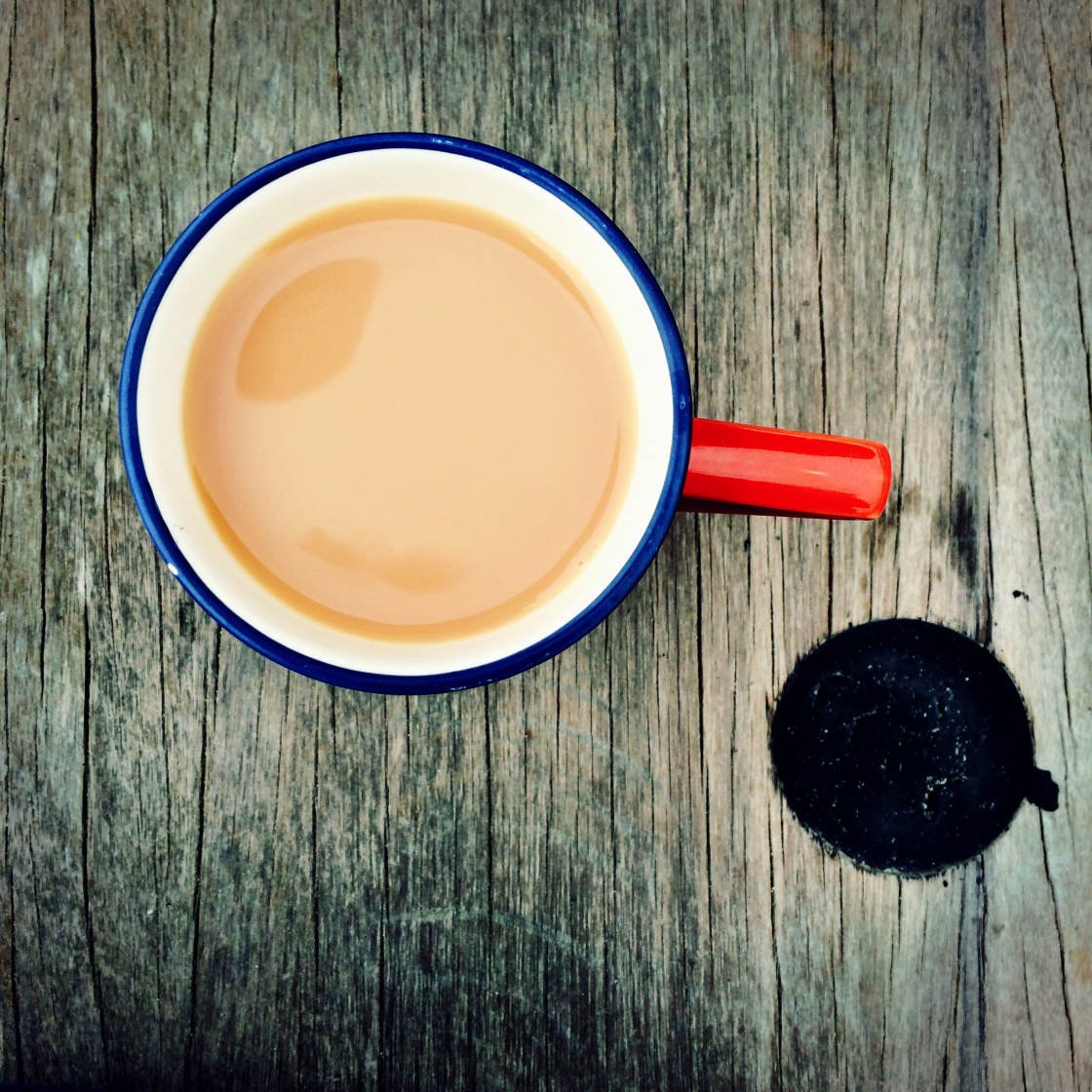 In this photo the cup is balanced by the black circle at the bottom right. If there was nothing of interest at the bottom right, the photo would look unbalanced. If both subjects were at the top or bottom of the image, or on one side, it would also be out of balance. By aligning the crucial parts of the composition diagonally, the image is balanced both horizontally and vertically.

4. Shoot From A Lower Angle

Rather than taking pictures from eye level, you’ll often find me crouching down with my iPhone or even lying on the ground so I can shoot from a really low angle. This technique can help simplify the composition and also gives a unique viewpoint that most people don’t usually see. 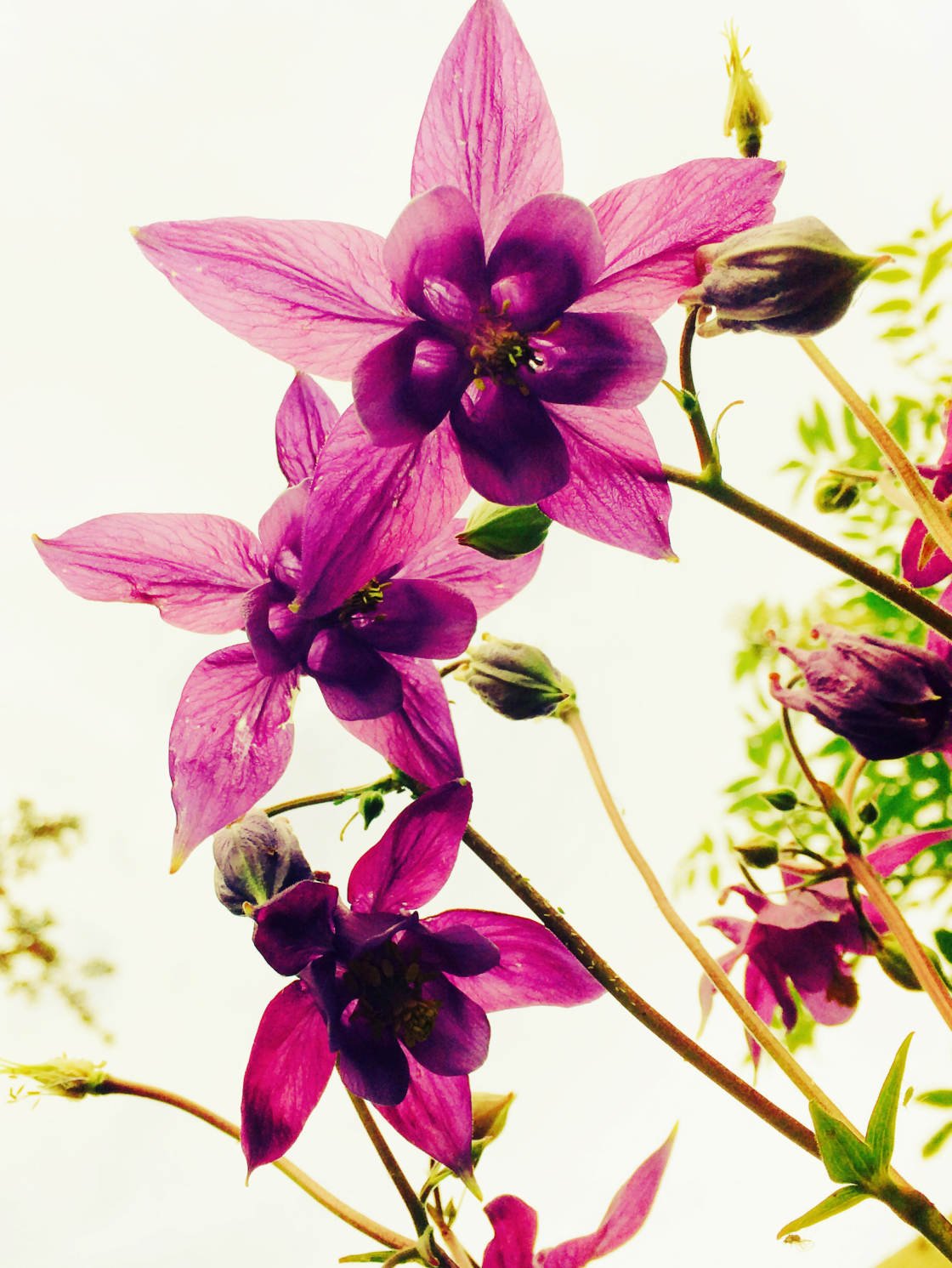 Shooting these flowers in the garden from a low angle was a much better option than shooting from eye level. It eliminated the distracting background and also had the added advantage of backlighting the flowers so that you can see the interesting detail in the petals.

Including foreground objects is a great way of adding interest to your iPhone photos. It also gives an image more depth, helping to lead the eye from the front to the back of the photo. Shooting from a lower angle often makes it easier to include objects in the foreground. 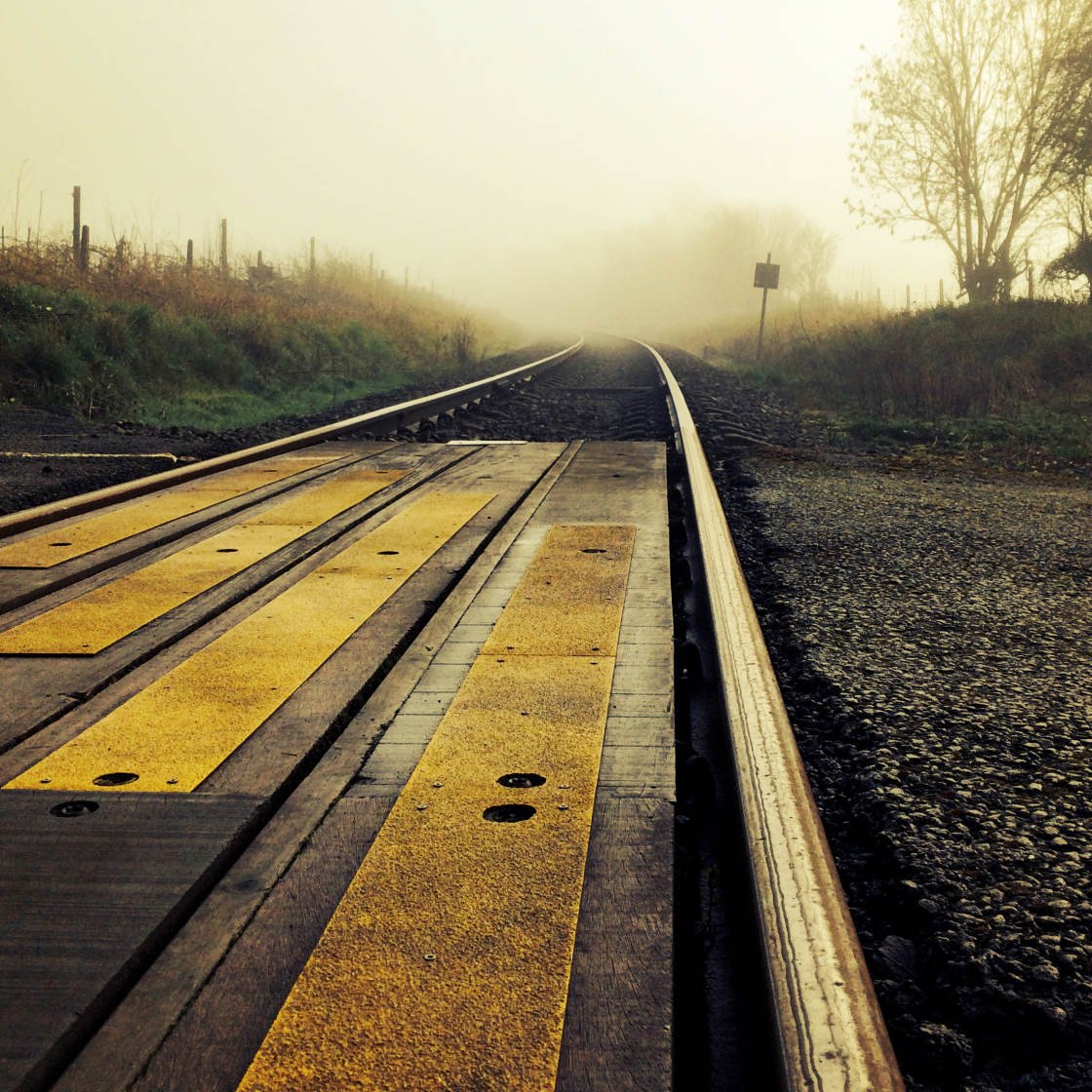 For this photo I crouched down so that the yellow lines on the track featured prominently in the foreground. Imagine how much less interesting the photo would be if I had taken a few steps forward and only included the dark stones in the foreground. 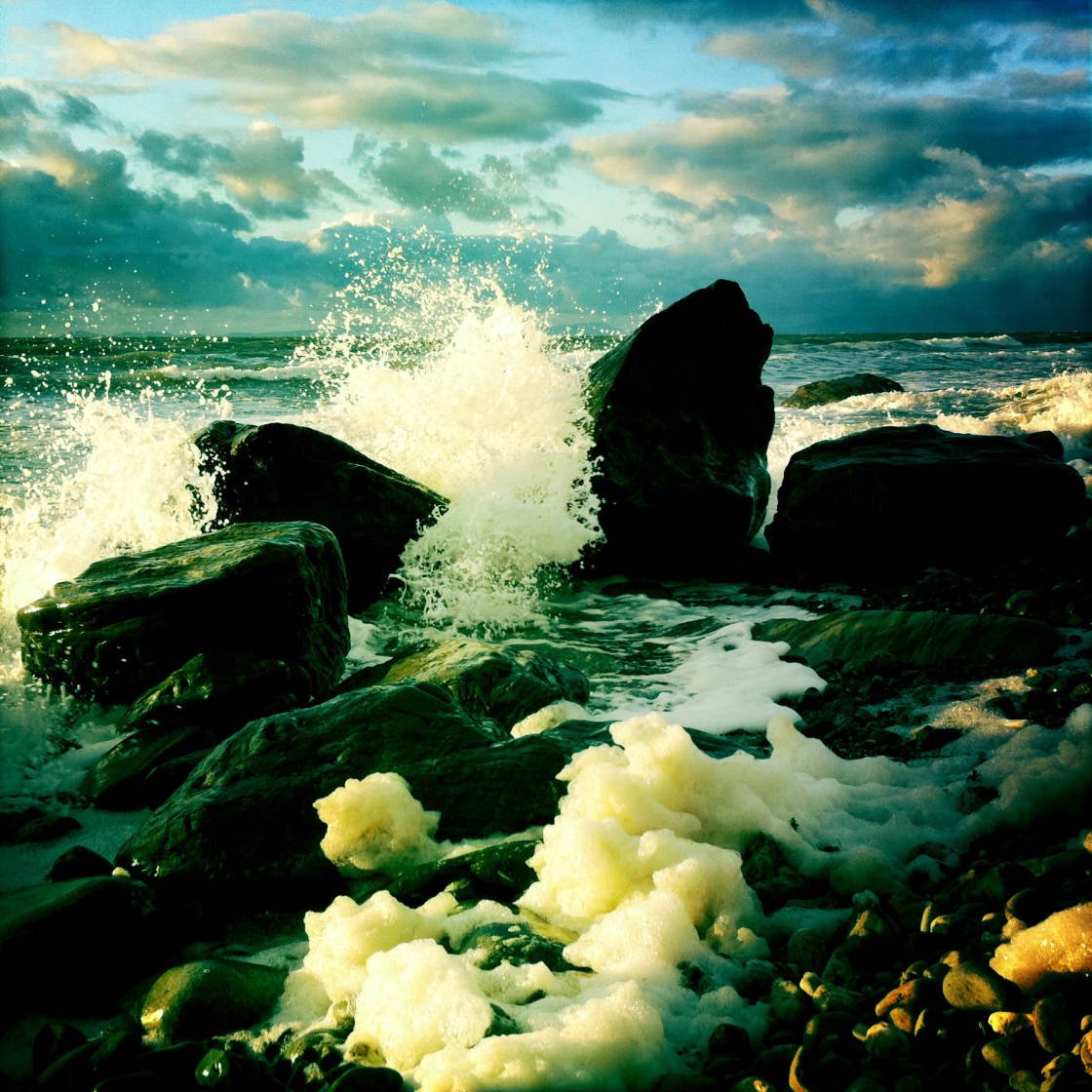 In this photo, the foam in the foreground adds interest and contrast to what would otherwise have been a very dark foreground. It also gives the photo depth, leading your eye from the front of the image to the splashing water.

Including lines in your composition is a great way of leading the eye into the image. Ideally the lines should lead towards the main subject, and they usually work better if they run diagonally rather than horizontally or vertically.

Roads, paths, railway tracks, bridges and rivers are commonly used as leading lines. Used correctly, leading lines are one of the most powerful ways to create an image with a really strong visual impact that will get your iPhone photos noticed. 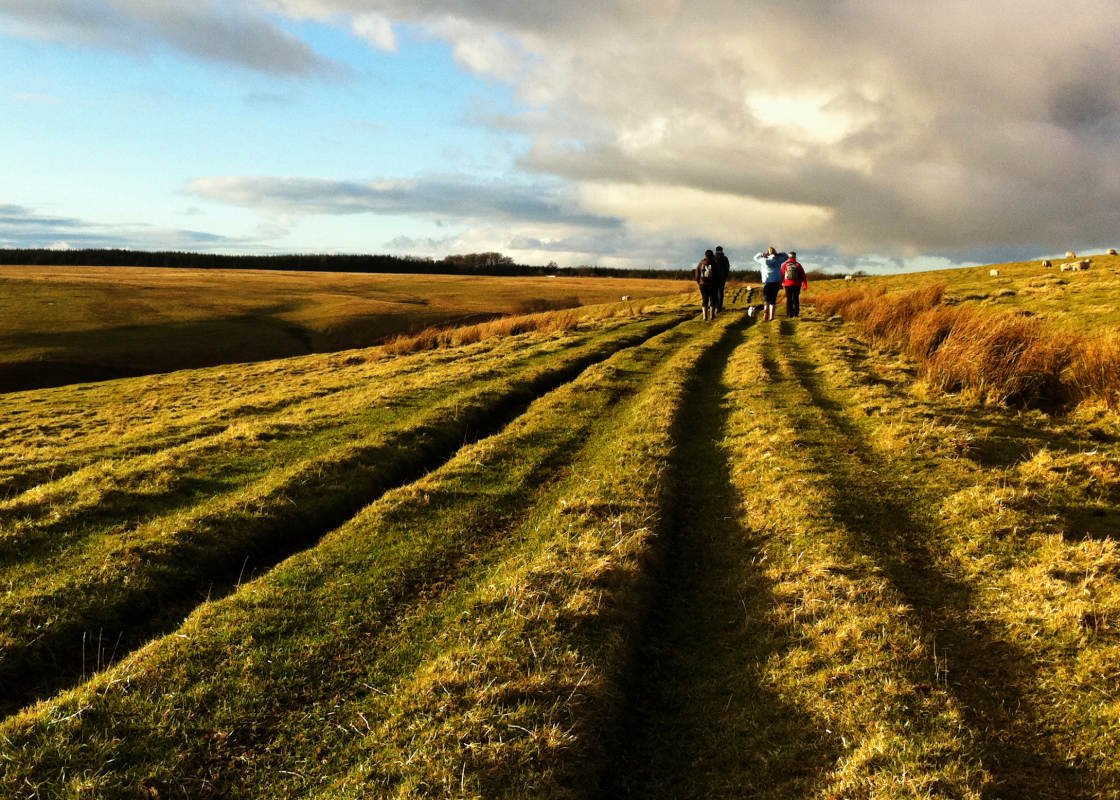 The above photo has several leading lines which all lead to the walkers in the distance. The converging lines draw your eye straight towards the people. The lines also give the image depth as your eye follows them from the front to the back of the photo. 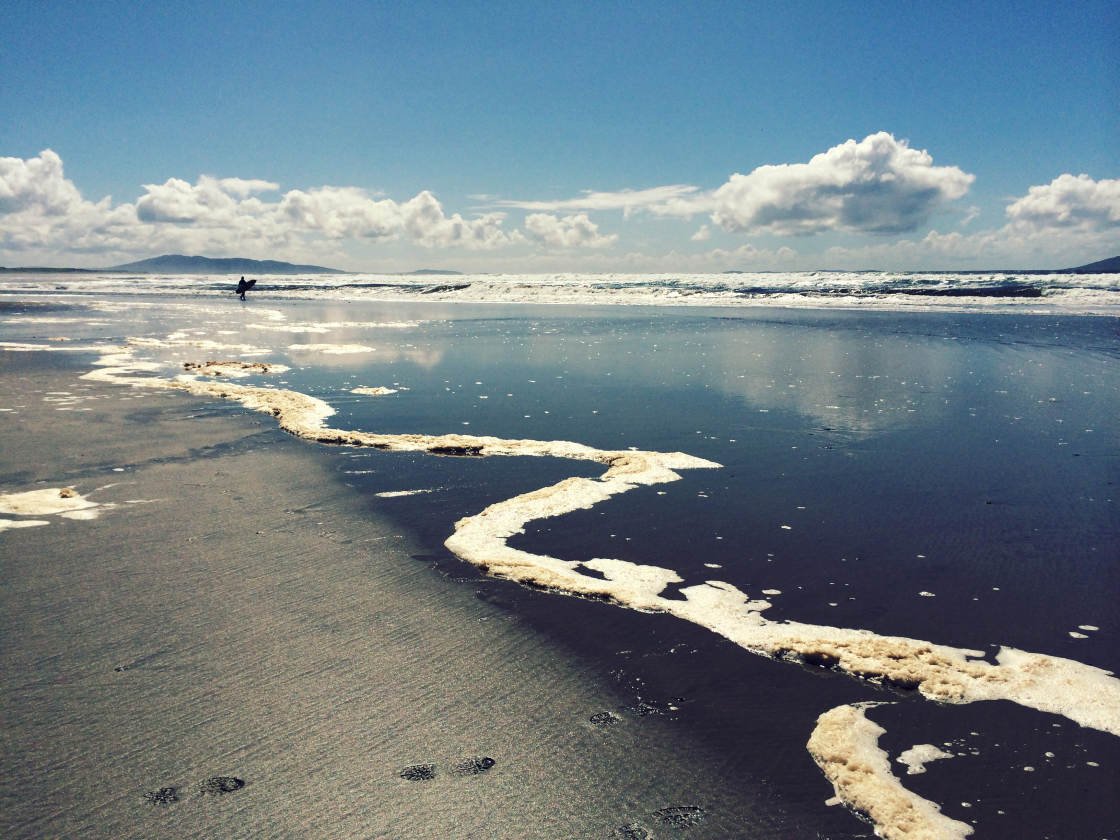 In this photo the line of foam leads diagonally from the foreground towards the surfer in the distance.

Your iPhone photos will lack impact if the main subject doesn’t stand out clearly enough against its surroundings. One simple composition technique is to fill the entire frame with your subject. This means getting closer to your subject so all of the surrounding background is eliminated.

Filling the frame gives your photos a more intimate and significant impact. Cutting out unnecessary background detail ensures the subject gets the full attention of the viewer. It also captures more detail and can create some really unique and abstract images. 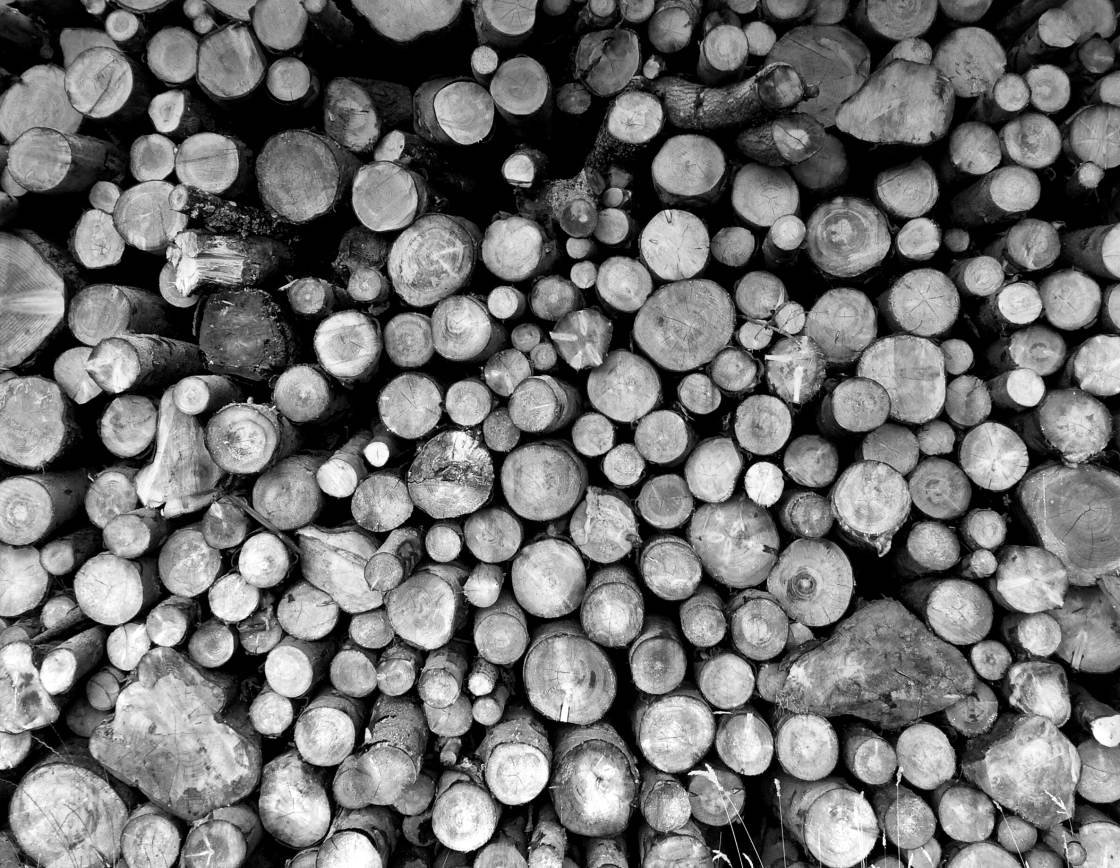 When I spotted this pile of logs in a field, I decided to fill the frame with just the logs to eliminate the field and sky from the picture. This created a more powerful and abstract composition, and focuses your attention on the patterns in the scene. 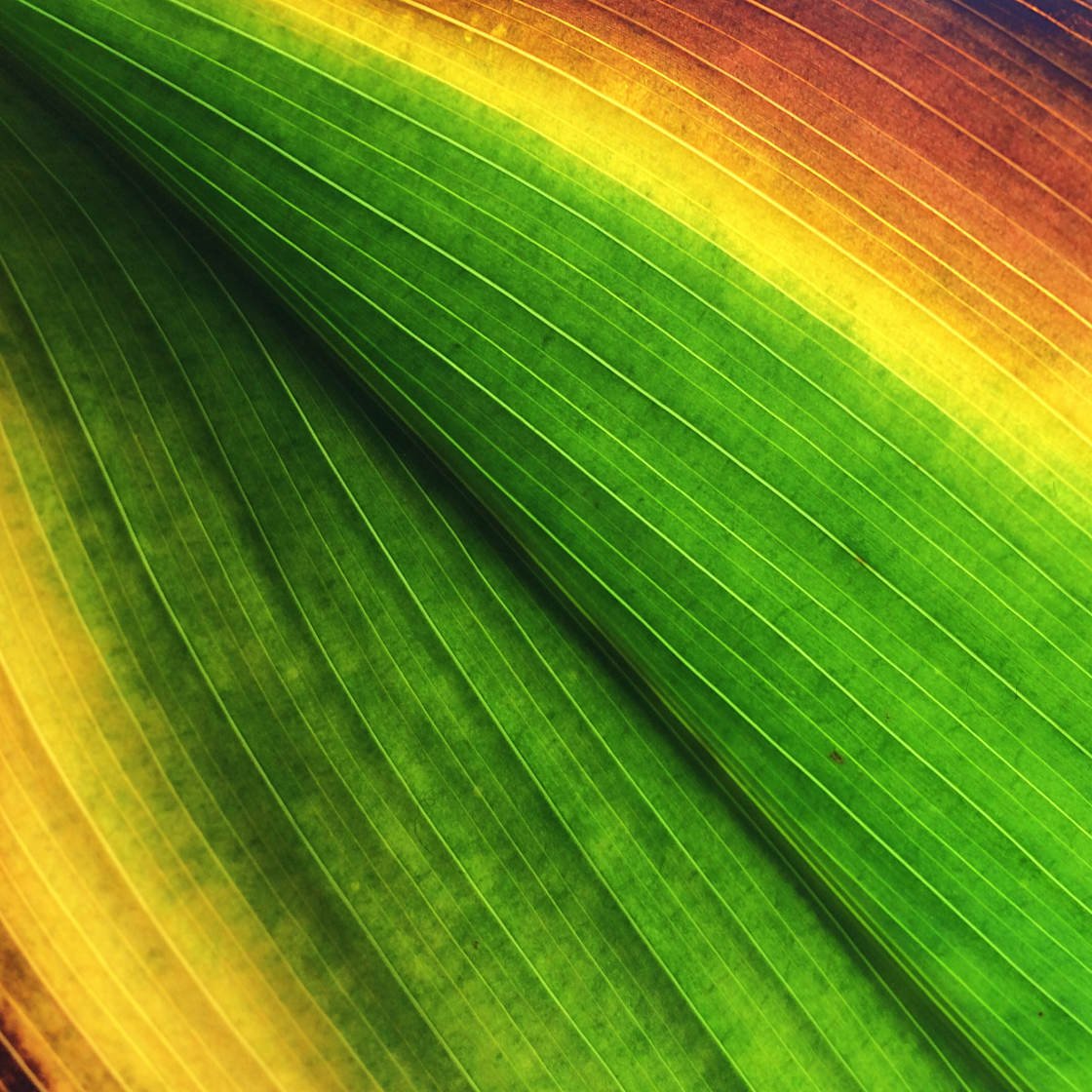 Filling the frame worked really well with this leaf. Shooting close-up has captured the color and detail of the leaf, and eliminated the distracting background objects surrounding it. The diagonal composition keeps the image balanced.

Whenever you look at a photo containing a moving subject, such as a person walking or cycling, your eye naturally tends to look ahead and follow the direction in which they are moving.

So if you’re shooting a scene where your subject is moving, it’s best to leave enough space inside the frame for the eye to follow that movement. This generally means leaving more space in front of them than behind them. 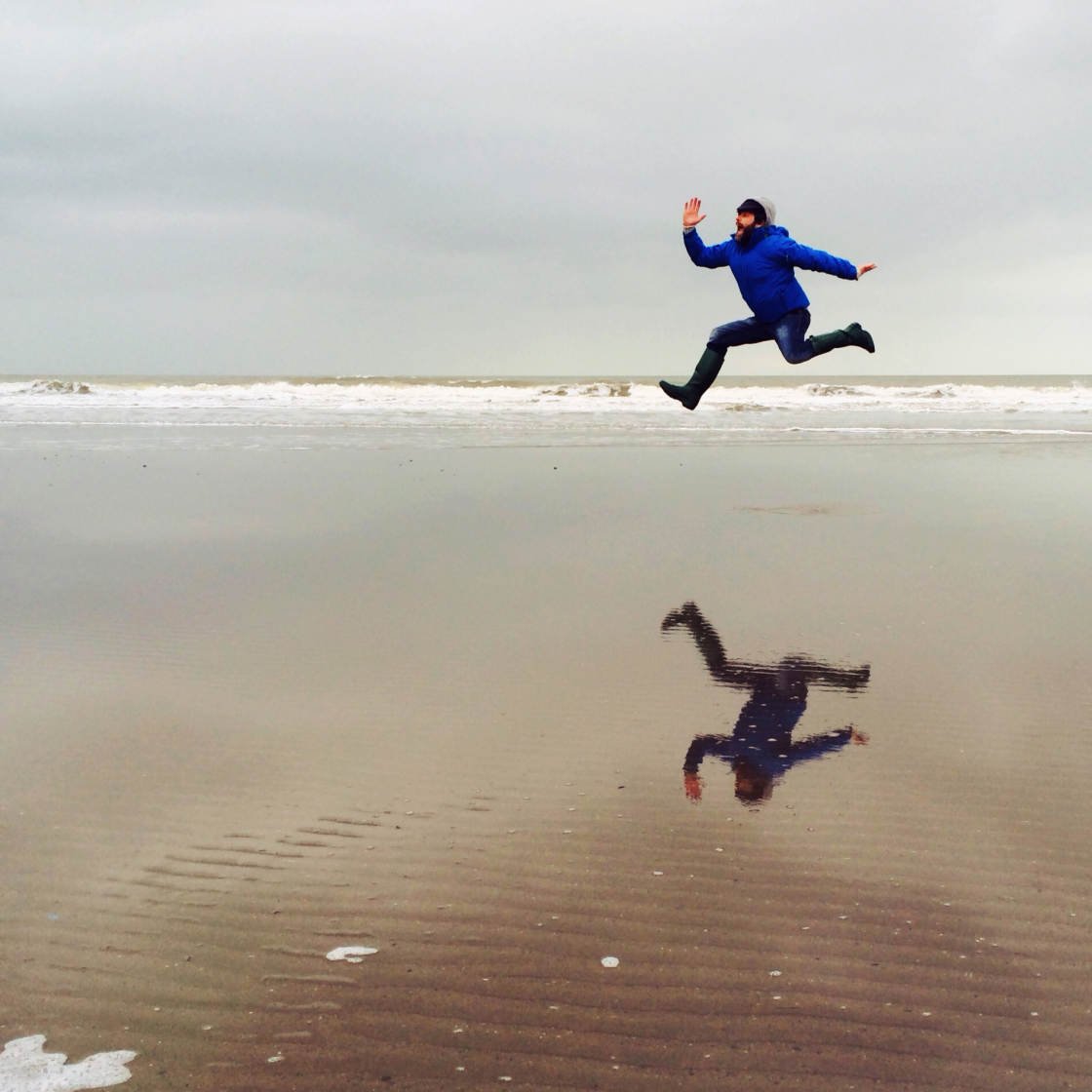 Placing the man on the right of the frame provides space for our eye to follow in the direction he is moving – it essentially gives him space to move into. If he was positioned on the left of the frame, it would give the impression that he was about to jump out of the photo and your eye would quickly go off the frame.

Allowing space for your subject to move into creates a more natural and harmonious composition. Not giving a moving subject enough space tends to create a feeling of imbalance and unease. You can also use this principle for portraits – naturally your eye tends to follow the person’s gaze, so leave more space in front of them than behind them to give them space to look into.

Framing involves using objects in the foreground of a scene to create a “frame” around the main subject. Archways, doorways, windows, tree branches and holes make perfect frames.

Placing these kind of objects around the edge of your composition helps isolate the main subject, drawing your eye towards it. As well as creating more visual interest, frames add meaning to a picture as it puts the main subject in context with its surroundings. 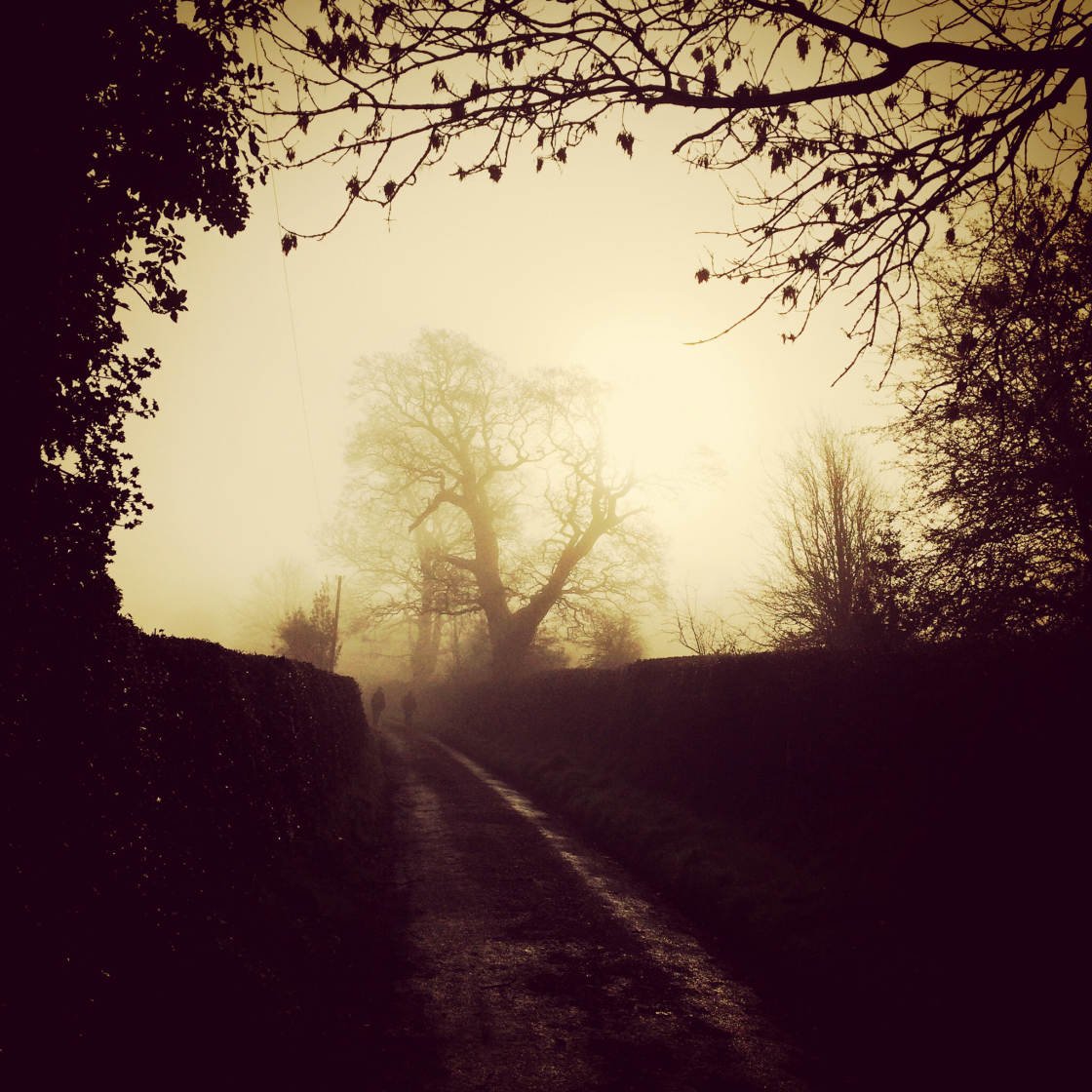 The dark silhouetted hedges and overhanging tree branches create a soft natural frame in this photo. This framing adds interest to the otherwise plain sky, and focuses the eye towards the tree and people in the distance. The framing along the top of the photo also helps to balance the large expanse of darkness at the bottom.

Photography is an art, not a science. There are no strict rules about what you can and cannot do. The above composition guidelines are just that… guidelines.

While they often prove extremely useful in many photographic situations, you shouldn’t let them restrict your creativity. If they don’t work in your scene, ignore them and experiment. For example, the rule of thirds often doesn’t work that well in square images and the photo may have more impact if you place your subject in the center or near the edge of the frame.

But to break the rules you must learn them first. So study the composition techniques covered above, use them in your photography until they are second nature, then start breaking the rules and see what happens!