Are you looking for a high quality wide-angle lens for your iPhone? We’ve been testing out the new ZEISS ExoLens wide-angle lens kit for the iPhone 6, 6s and Plus models, and it’s the best quality lens we’ve ever reviewed. This professional-level iPhone lens is based on the same technology that’s been used for high-end DSLR cameras. Read on to find out more about the ZEISS ExoLens, and how you can use it to create superb quality wide-angle shots with your iPhone. 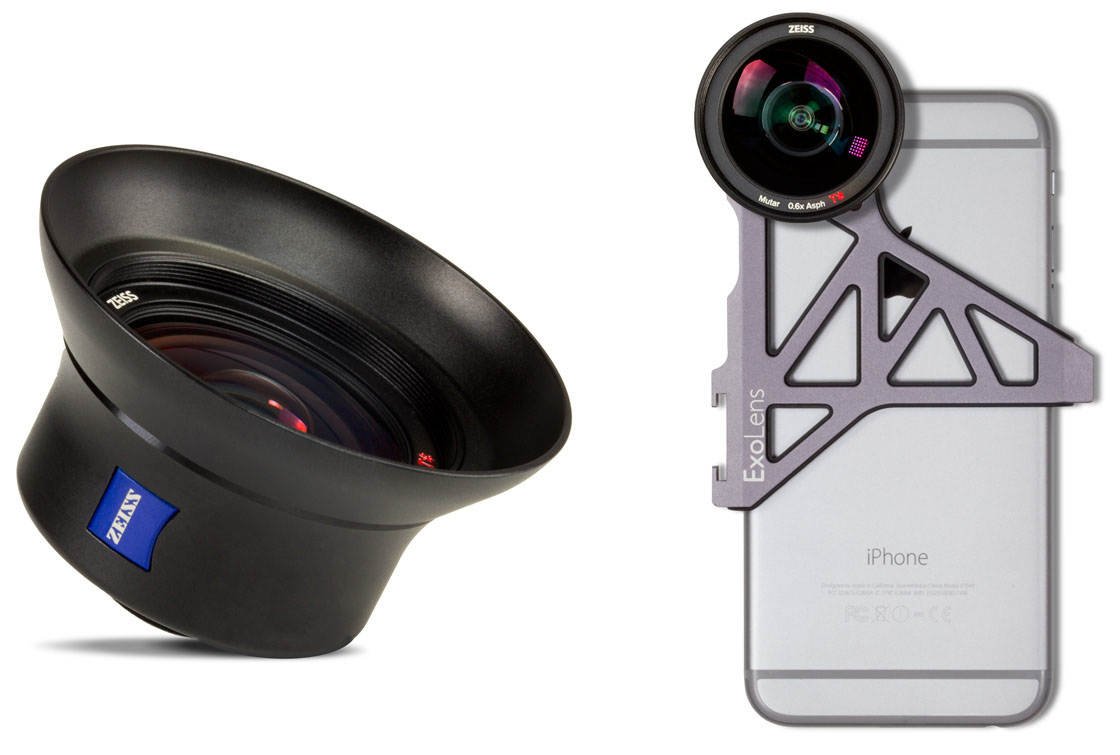 It’s not just a lens that you’re purchasing. There are also a number of lens accessories and a sturdy mounting bracket included in the box. The ZEISS ExoLens wide-angle kit includes the following: 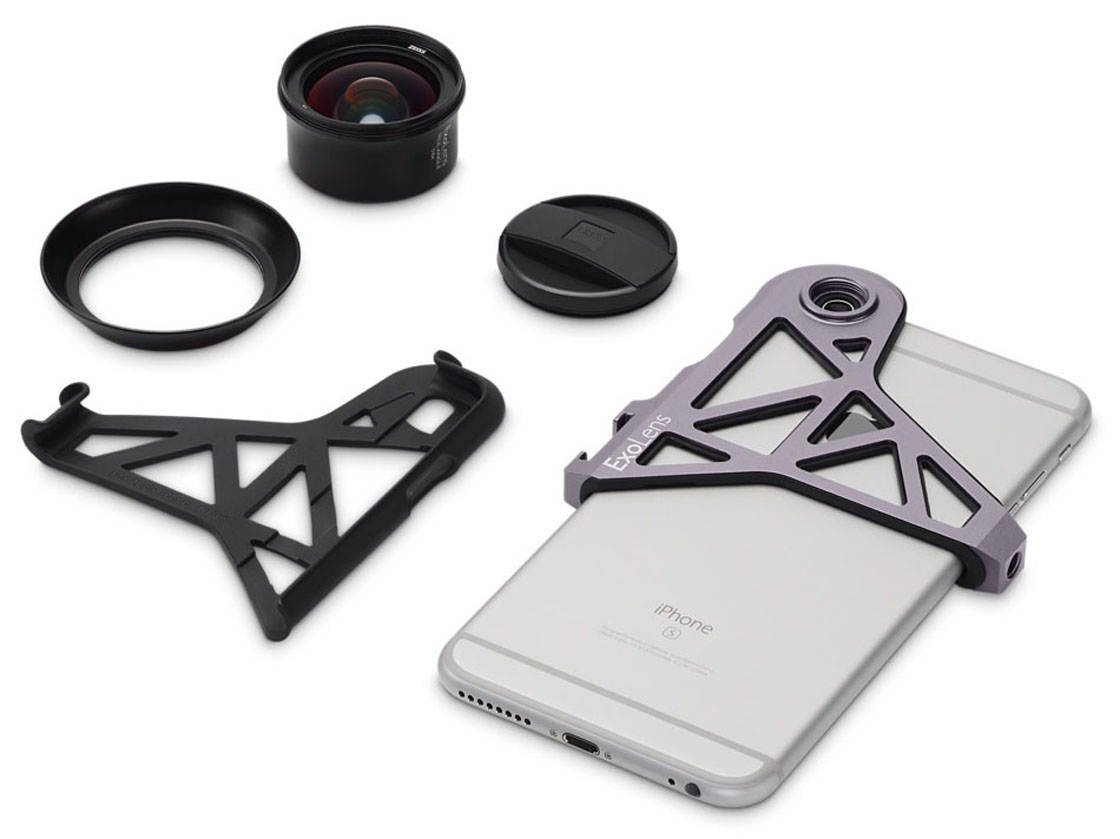 As soon as you open the box you can tell that this is a quality product. This isn’t surprising as ZEISS have over 170 years of experience engineering professional optics, and they’ve built a remarkable trust among professional photographers.

The lens is well built and the glass features the ZEISS T* anti-reflective coating. It’s surprisingly large (in diameter and depth) and it’s much heavier than other iPhone lenses – which suggests that we’re dealing with a serious bit of equipment. 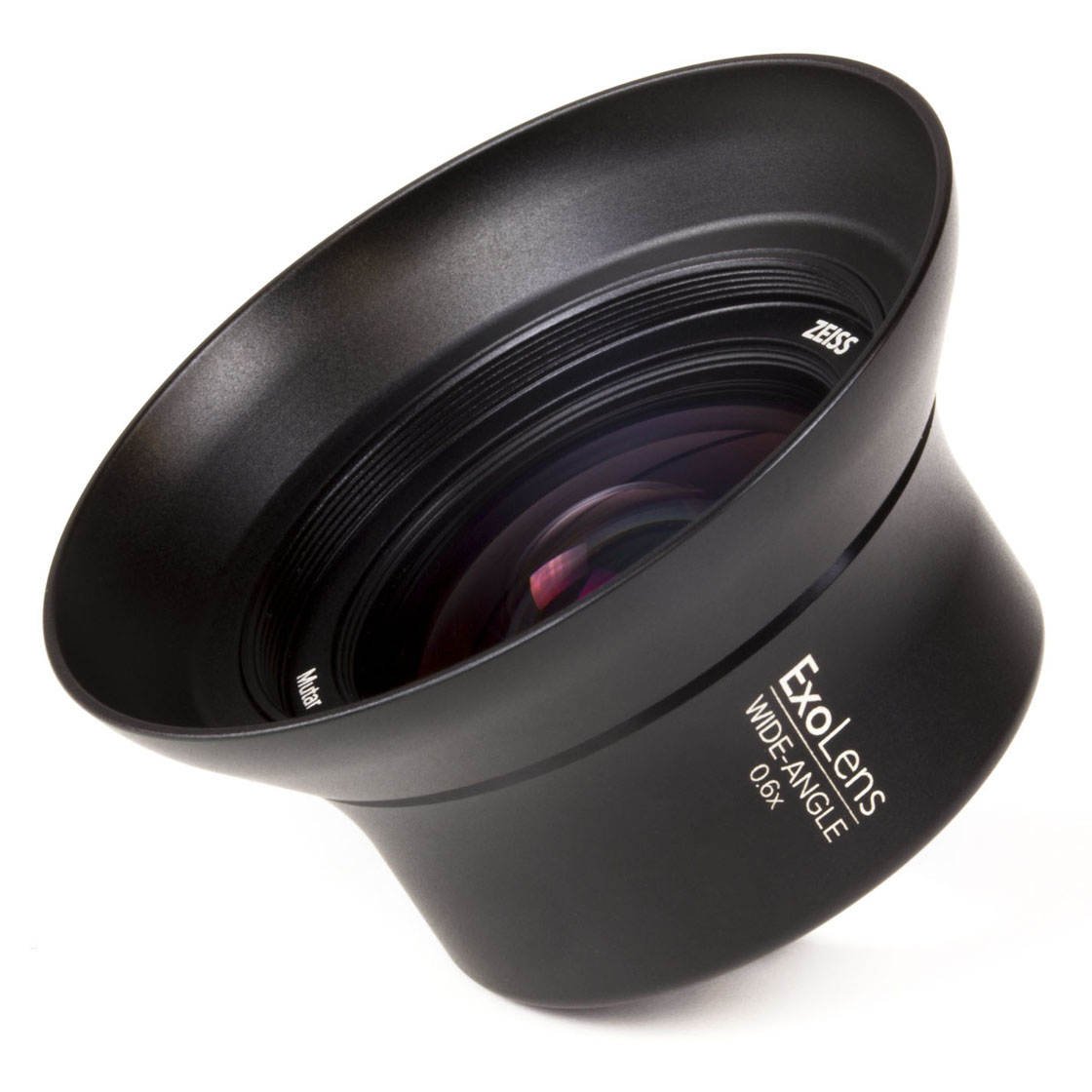 It’s larger and heavier because it has more glass elements than other wide-angle iPhone lenses. These extra glass elements help improve image quality and limit softening – especially around the corners of the frame.

With the aluminum lens hood attached, the lens looks even bigger. The hood pushes on (rather than screws), but it fits very snuggly and won’t come off easily.

To attach the lens to your iPhone, you first have to slide the angular accessory mount onto the phone. The mount has a rubber sleeve which can make it quite tricky to slide onto the iPhone, but once it’s on it won’t come off accidentally. 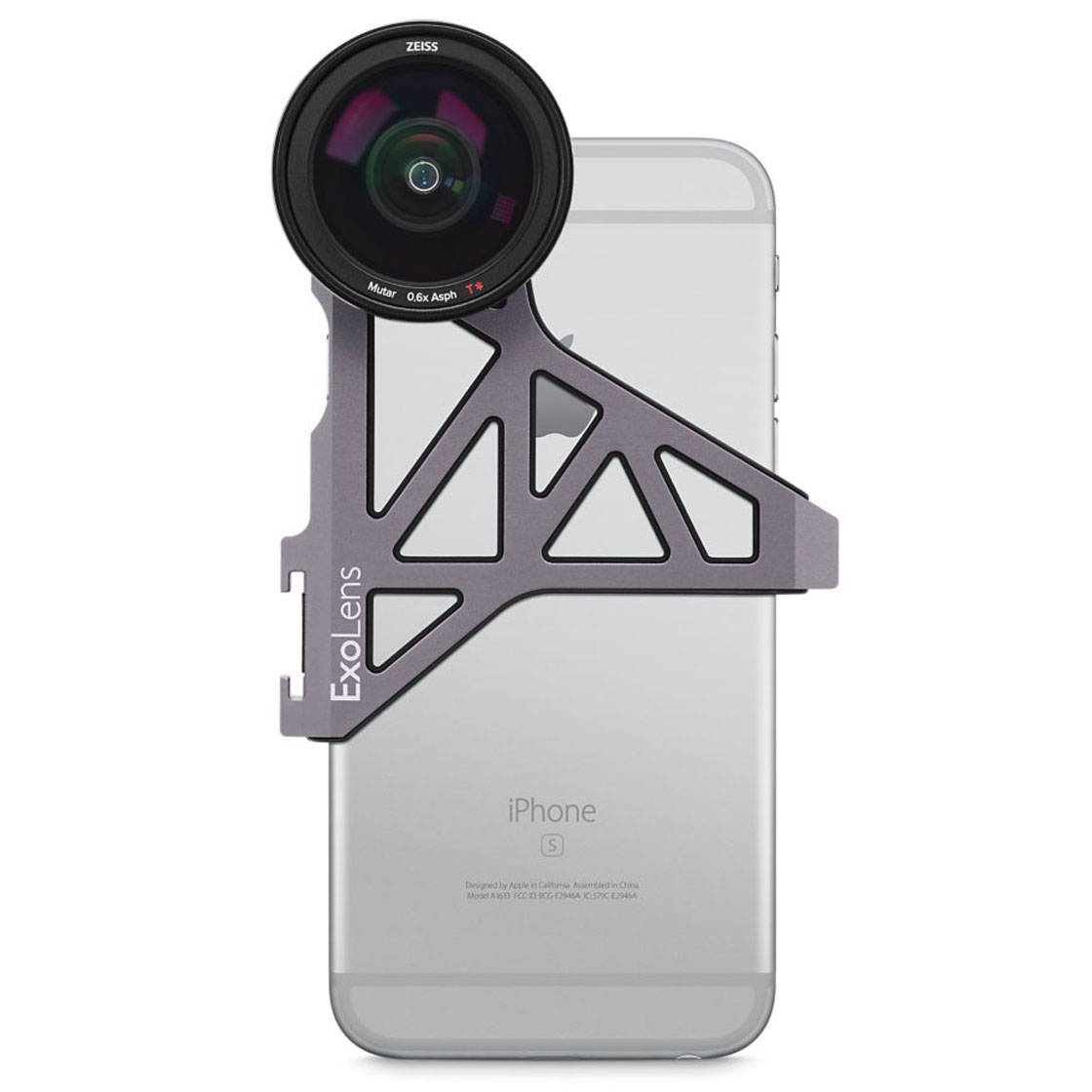 The mount has a threaded socket onto which you screw the wide-angle lens, holding it in the correct position in front of the iPhone’s built-in lens. 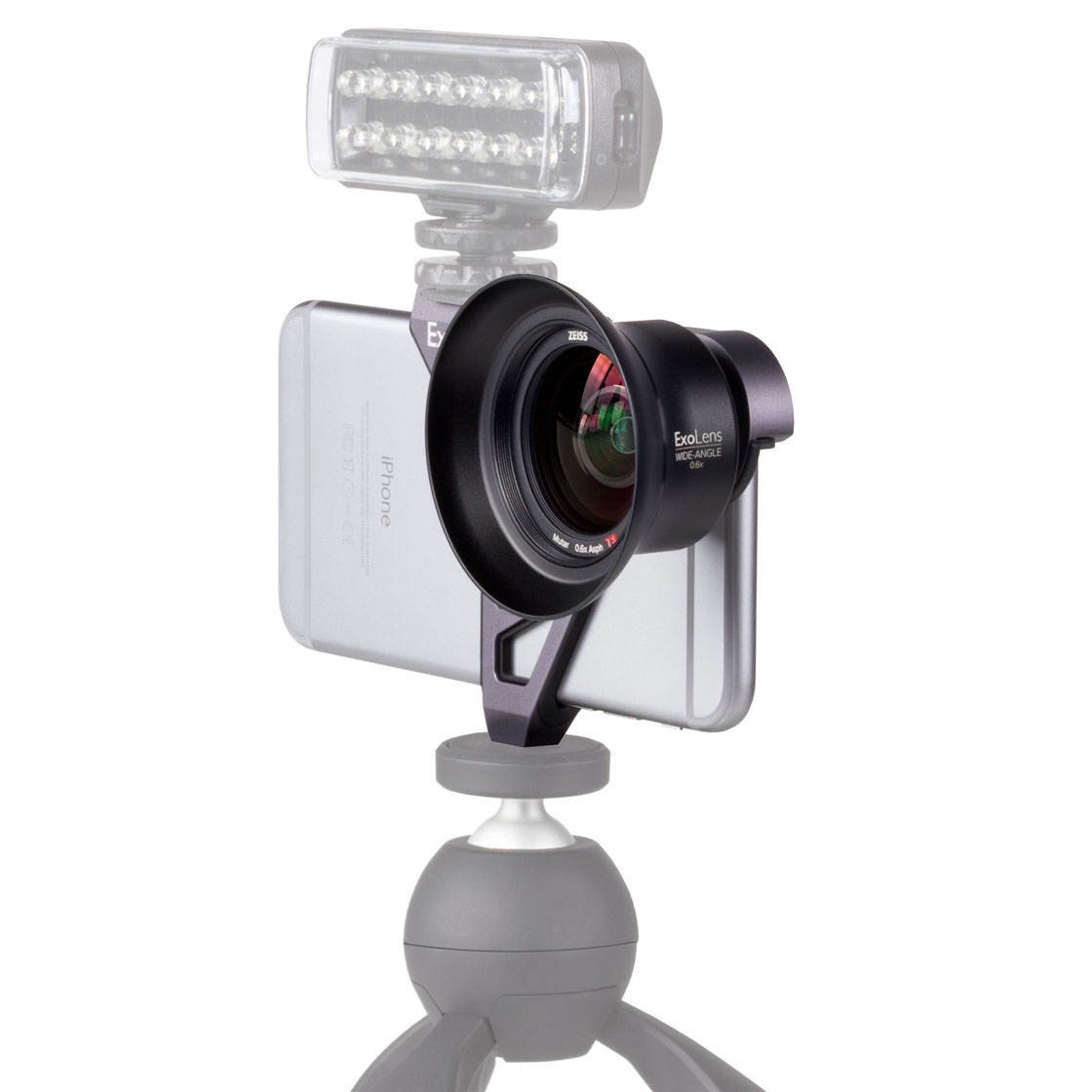 Due to the shape and size of this lens it’s not for the faint-hearted! Once attached, the lens and mount make your iPhone too large and bulky to slip into regular pockets. And the mount’s protrusions (in the shape of the tripod and flash mounts) make the iPhone too bulky and awkward to hold and use for anything other than photography.

So it’s not a kit you’ll want to leave attached permanently to your phone. But if you’re serious about iPhone photography and frequently want great wide-angle shots, then the extra bulk is worth it. 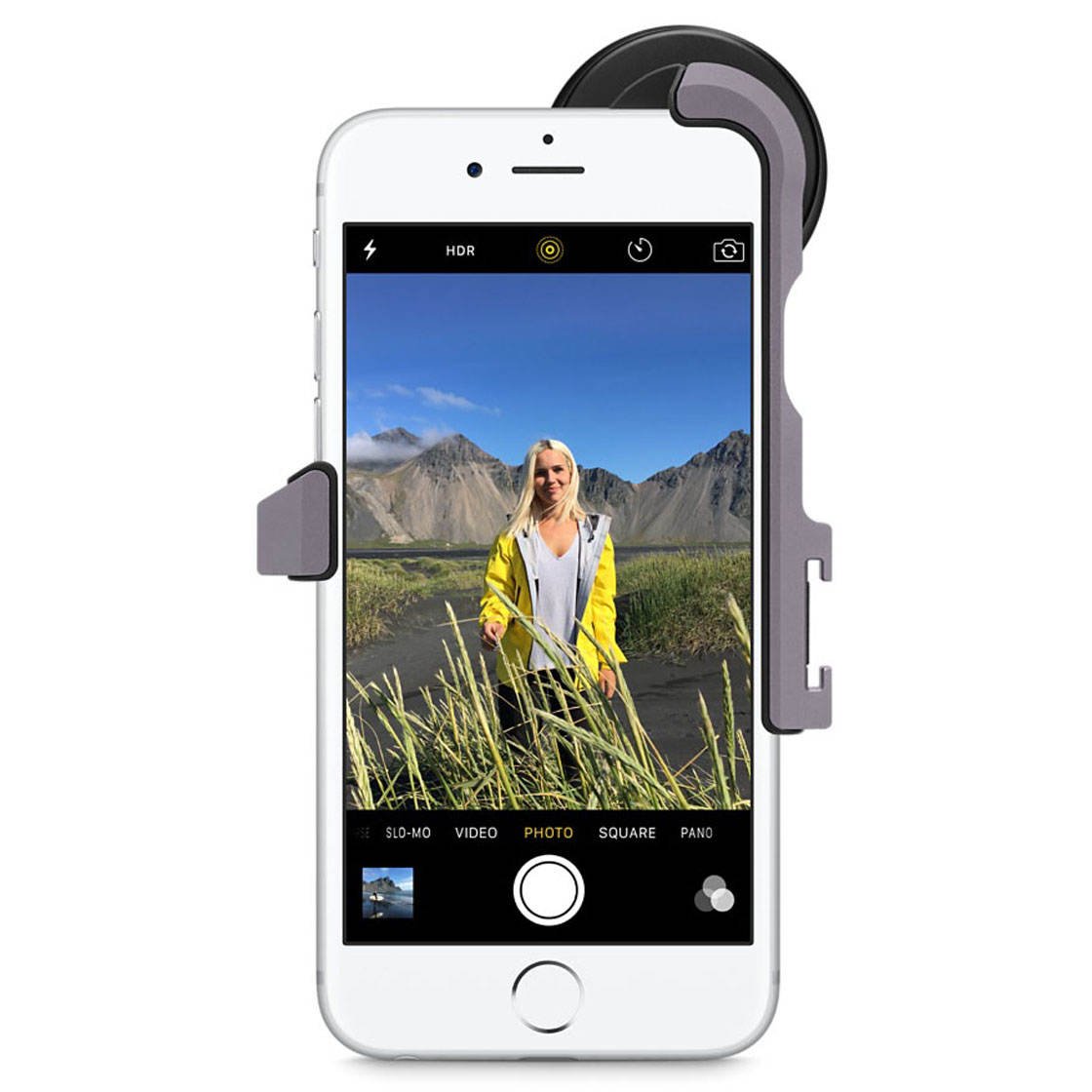 On the plus side, the mount’s protrusions actually make the iPhone easier to hold steady when taking photos, and your phone is less likely to slip out of your hands.

As a wide-angle lens it performs very well – behaving like an 18mm wide-angle lens on a regular camera. It allows you to include much more of the scene without noticeably compromising sharpness in the corners of frame (which is a common problem with cheaper iPhone lenses). 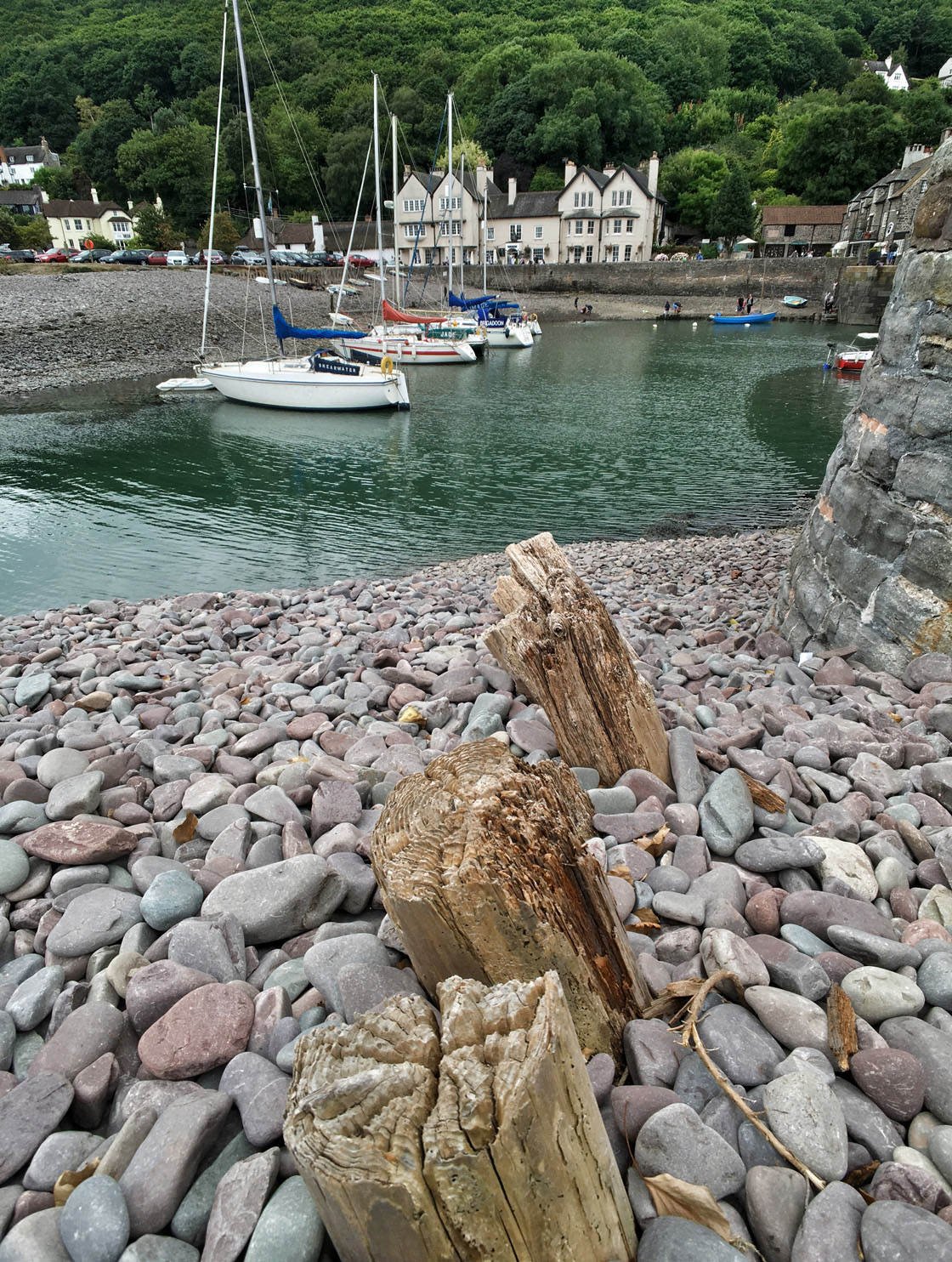 The iPhone’s native lens is already fairly wide-angle, making it great for landscape photography and group shots where you often want to get more into the frame without having to move further back. With the ExoLens you get even more into the shot.

The photos of the pebbled beach below illustrate how much more the wide-angle lens can fit into the frame compared to the iPhone’s built-in lens.

Both pictures where taken from the exact same location. The first image was taken with the iPhone’s built-in lens, and the second one was shot with the Exolens wide-angle lens. 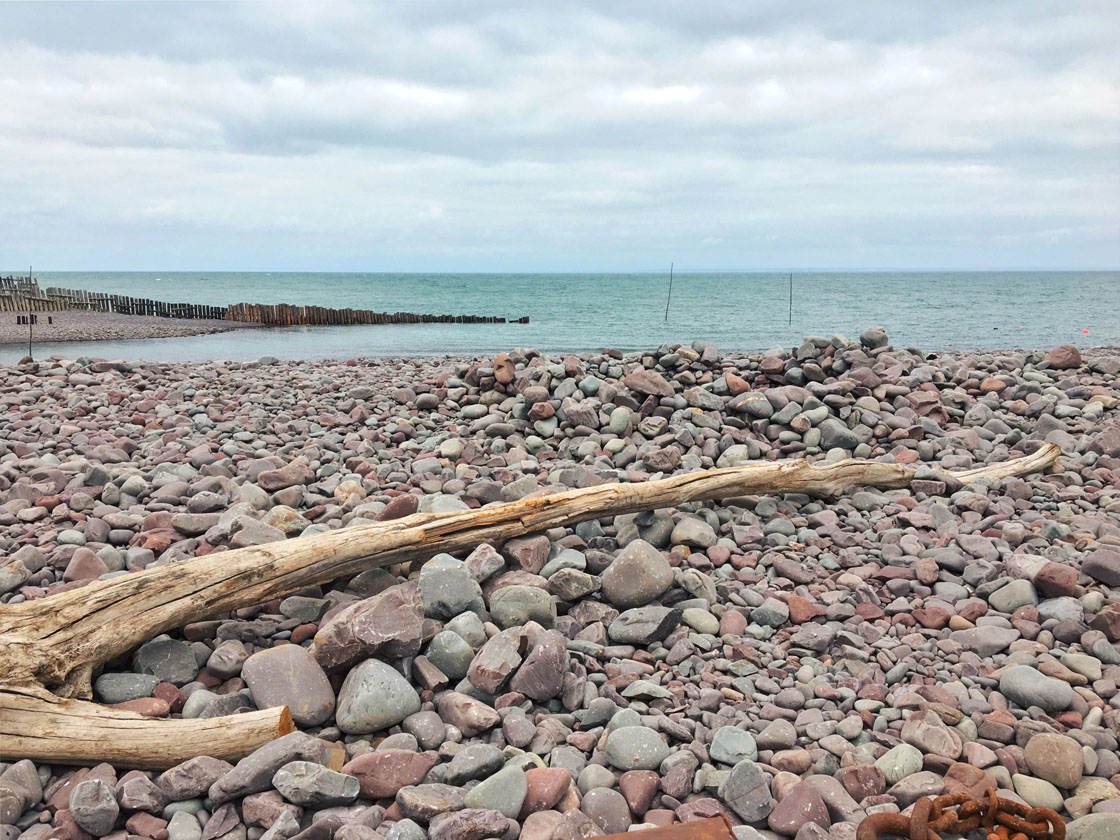 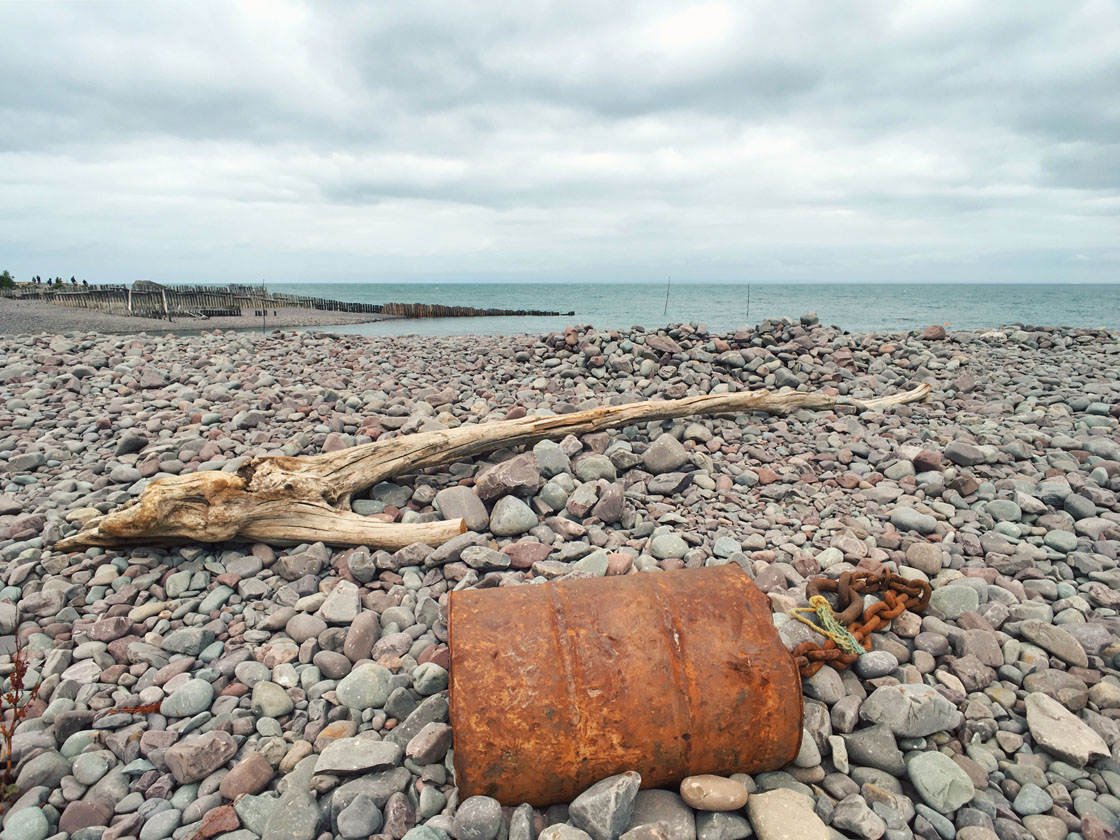 With the wide-angle lens I was able to include the interesting rusty barrel in the foreground, without having to move backwards or re-frame the shot.

Below is another example that shows how much more of the scene can be squeezed into the frame with the wide-angle lens. Again, the first image was shot with the iPhone’s built-in lens, and the second was taken with the Exolens wide-angle lens. 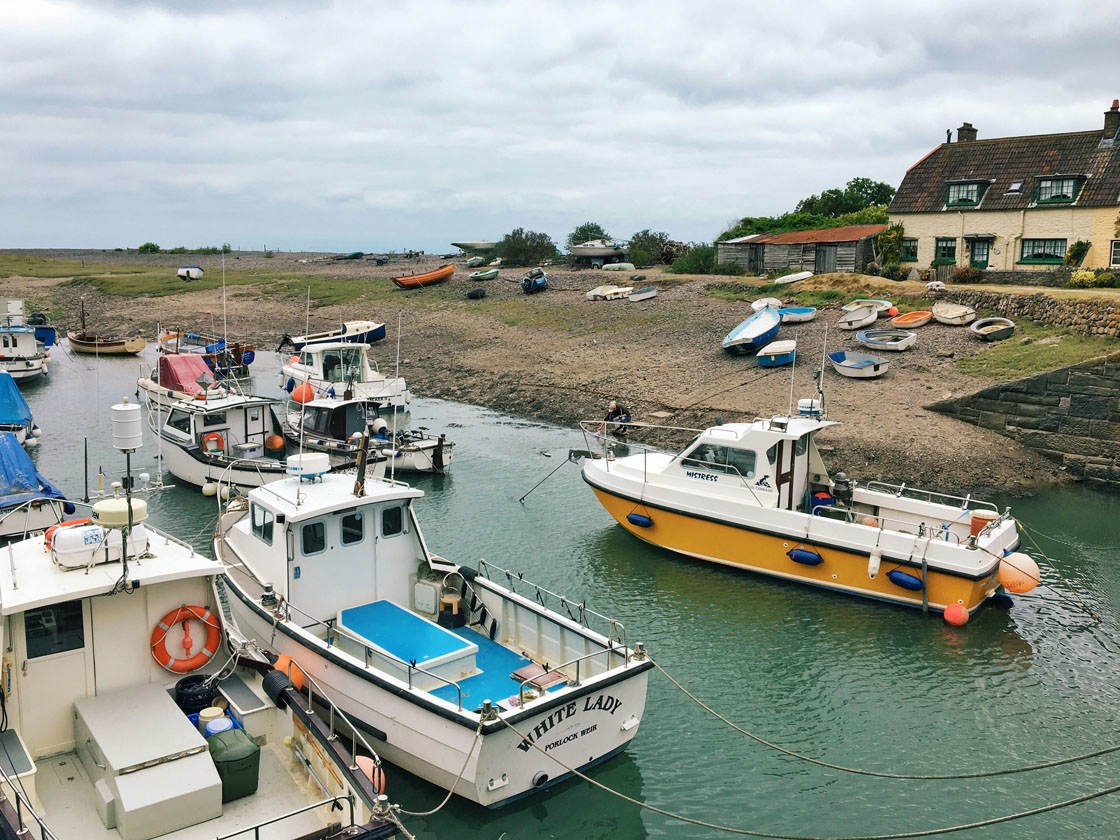 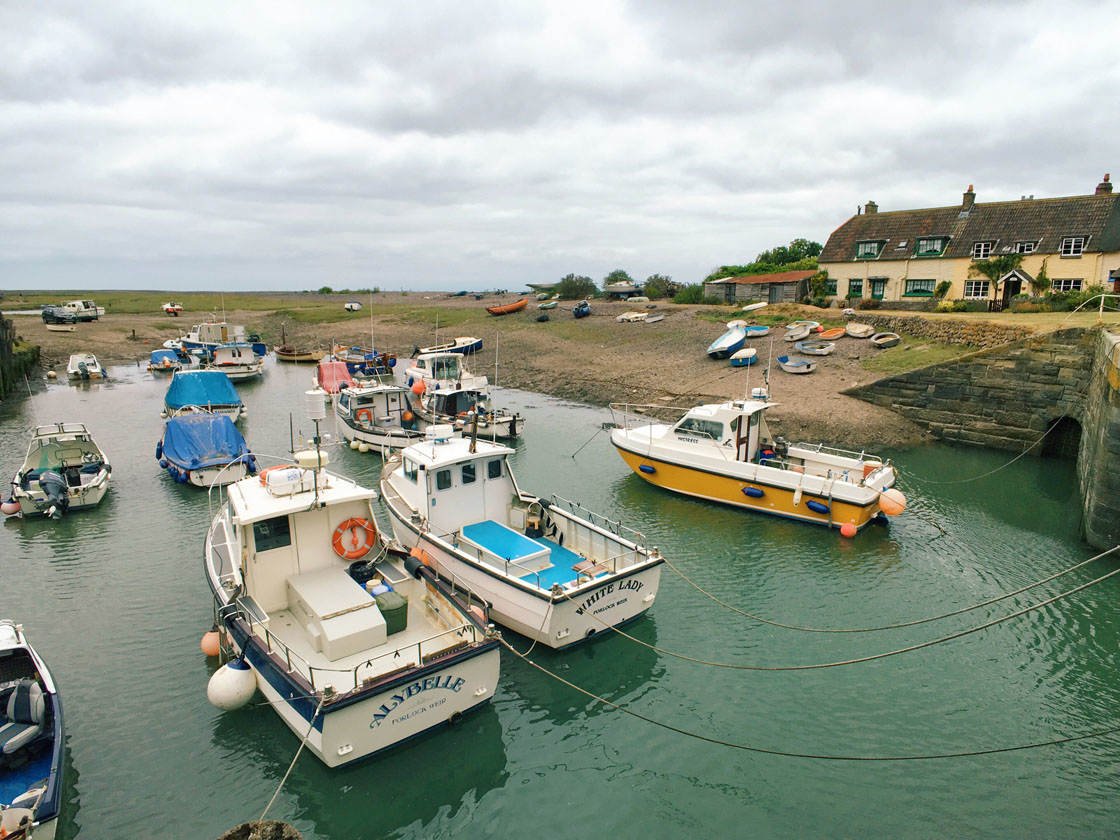 Both of these shots were taken from a narrow footbridge where moving further away from the subject wasn’t really an option, so the wide-angle lens was essential here.

If you’ve ever used a third-party iPhone camera lens, you may have noticed that the edges and corners of the image can appear blurry or soft. The cheaper the lens, the more blurring you tend to get.

So how did the ZEISS Exolens fare in terms of image quality? As you’ve already seen from the example photos above, the images look clear and sharp.

But let’s take a closer look by zooming in on an image to check the fine detail. Below is a shot taken with the wide-angle lens, and beneath it is a zoomed in section of the bottom left corner of the same image. 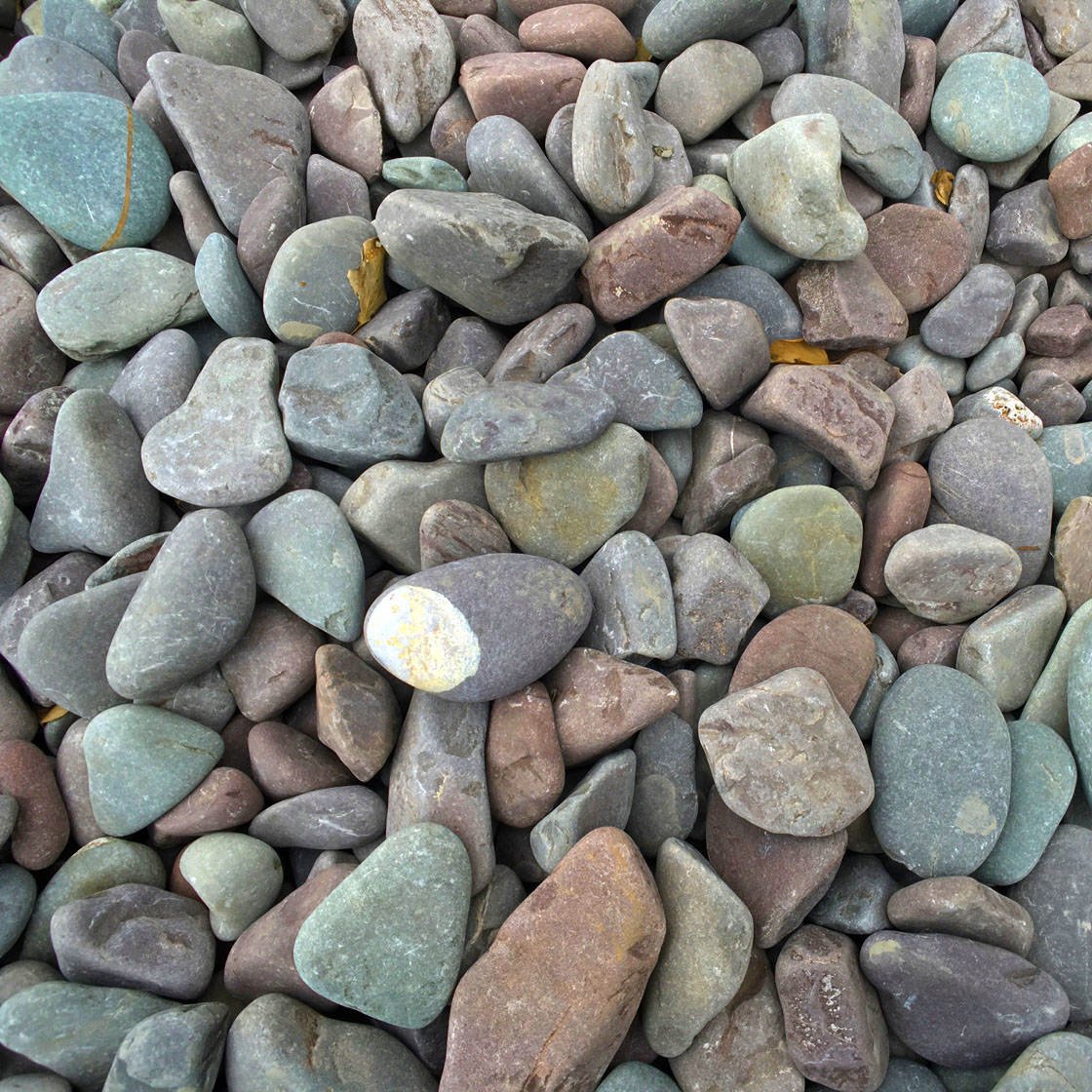 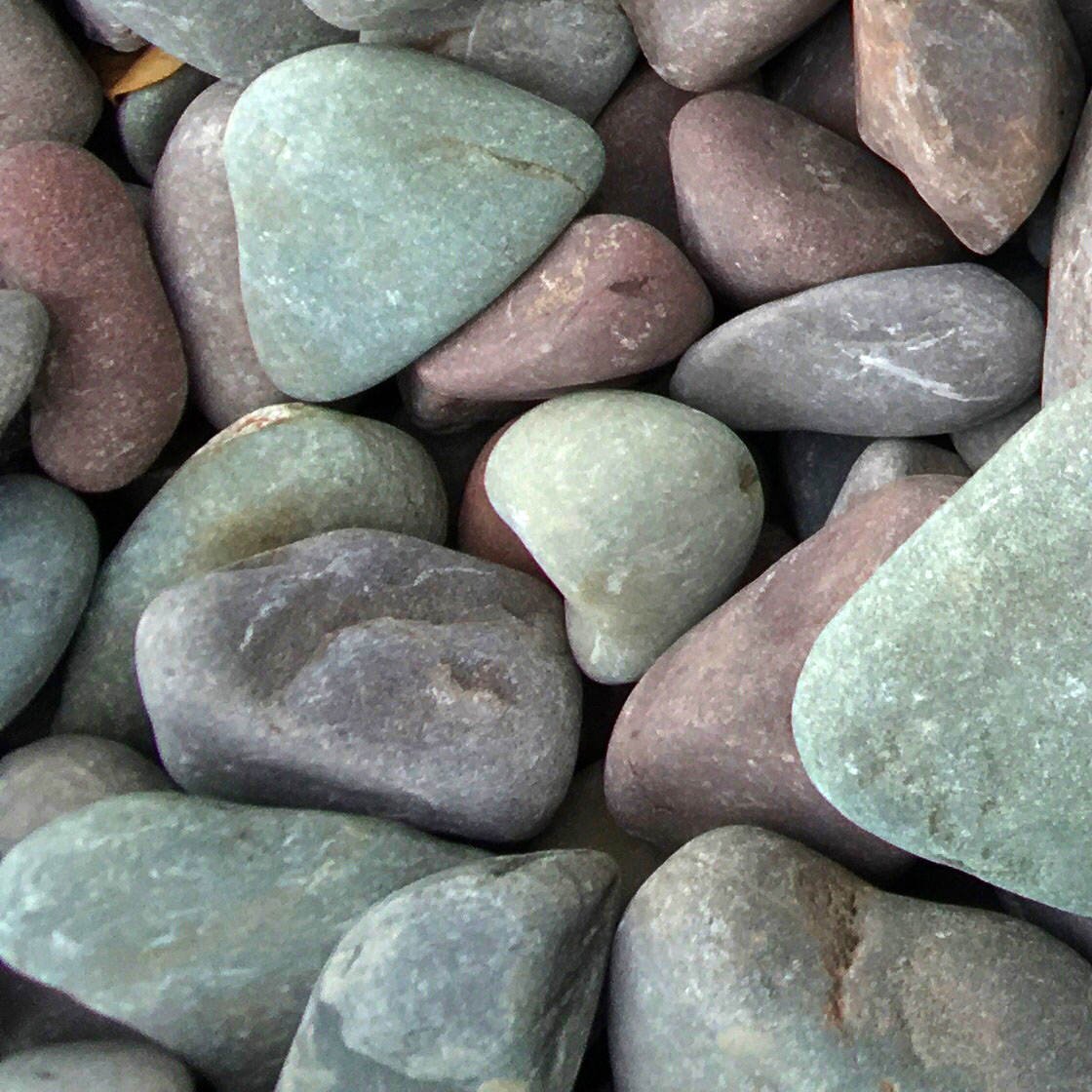 Zooming in allows us to take a really close look at the sharpness of the picture. While there is some evidence of slight softening in the bottom left-hand corner of the cropped image, it’s far better than any other iPhone lens we’ve tested.

You have to zoom in a considerable amount before you start to notice this softening, and when viewing the image as a whole it isn’t really noticeable. For most shots your subject won’t be positioned in the corners, so this is certainly acceptable.

Where To Buy The ZEISS Exolens

It’s perhaps testament to the quality of this product that Apple sells it on their own website. You can purchase the ZEISS ExoLens wide-angle lens kit from Apple for $199.95 with free delivery. $199.95 might sound expensive for an iPhone lens, but this is hands-down the best wide-angle lens that we’ve reviewed.

If you like the look of this wide-angle lens, you’ll be pleased to know that there are two more ZEISS ExoLens kits available. There’s a macro lens for taking amazing close-up photos, and a 2x telephoto lens which allows you to zoom in on distant subjects. 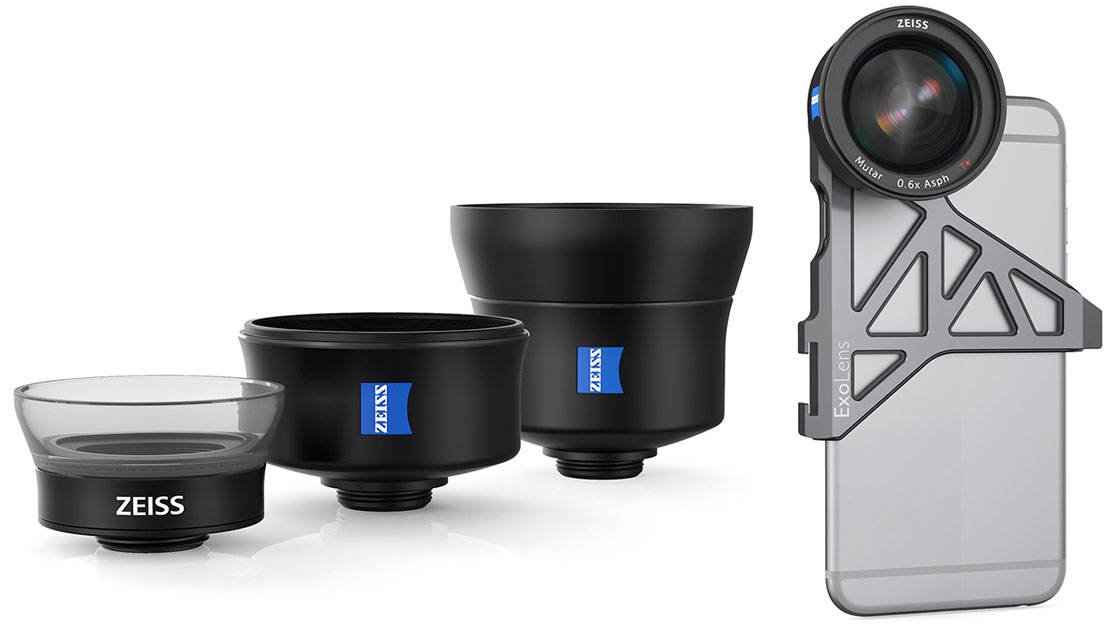 You can find the full range of ExoLens iPhone accessories on the ExoLens website.