The iPhone 7 Plus camera is a real game-changer in the world of mobile photography. The additional built-in telephoto lens means that you can now take high quality “zoomed in” photos with the iPhone. And the camera’s new Portrait mode has an incredible Depth Effect which allows you to mimic the shallow depth of field that you could previously only achieve with a DSLR camera. In this tutorial, you’ll discover more about these new iPhone camera features, and how to use them to take your creativity to the next level. 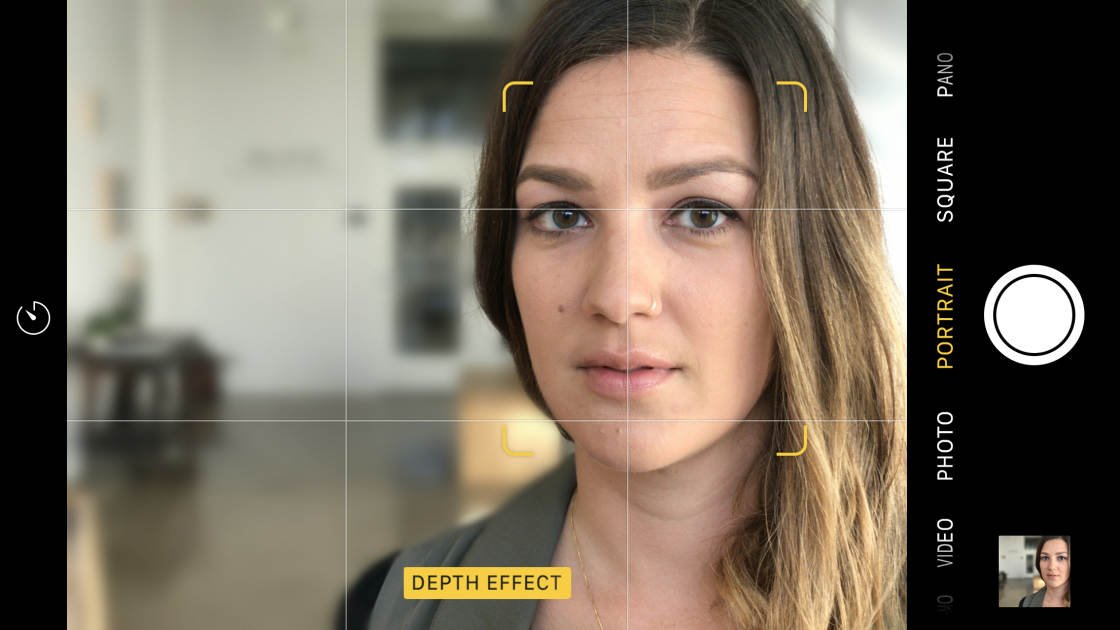 1. Zoom With The 2x Telephoto Lens

The regular iPhone 7 camera has the standard wide-angle lens, similar to previous iPhone models. But the iPhone 7 Plus has two separate rear-facing camera lenses. This is what makes the 7 Plus such an amazing camera. 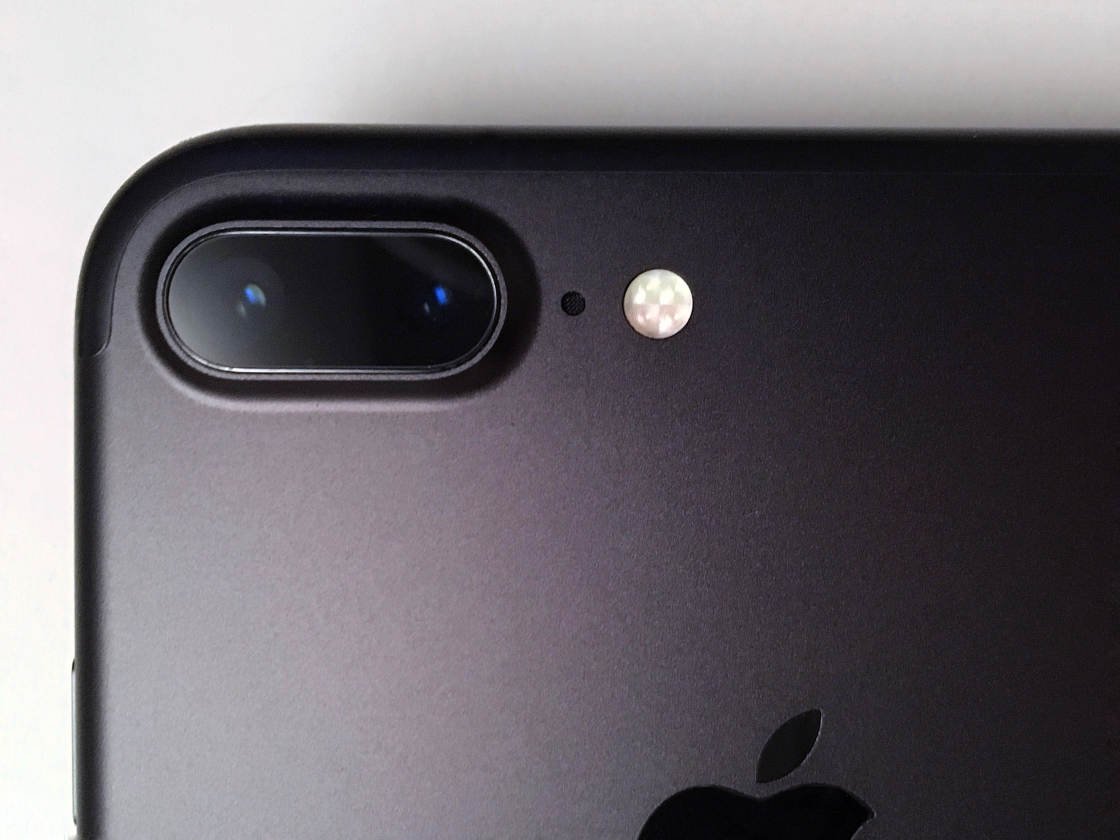 The first lens is the standard wide-angle lens, which is perfect for capturing a wide view of your scene.

The other lens, which you’ll only find on the iPhone 7 Plus, is a 2x telephoto lens. This lens allows you to capture a closer view of your subject without having to physically move any closer. 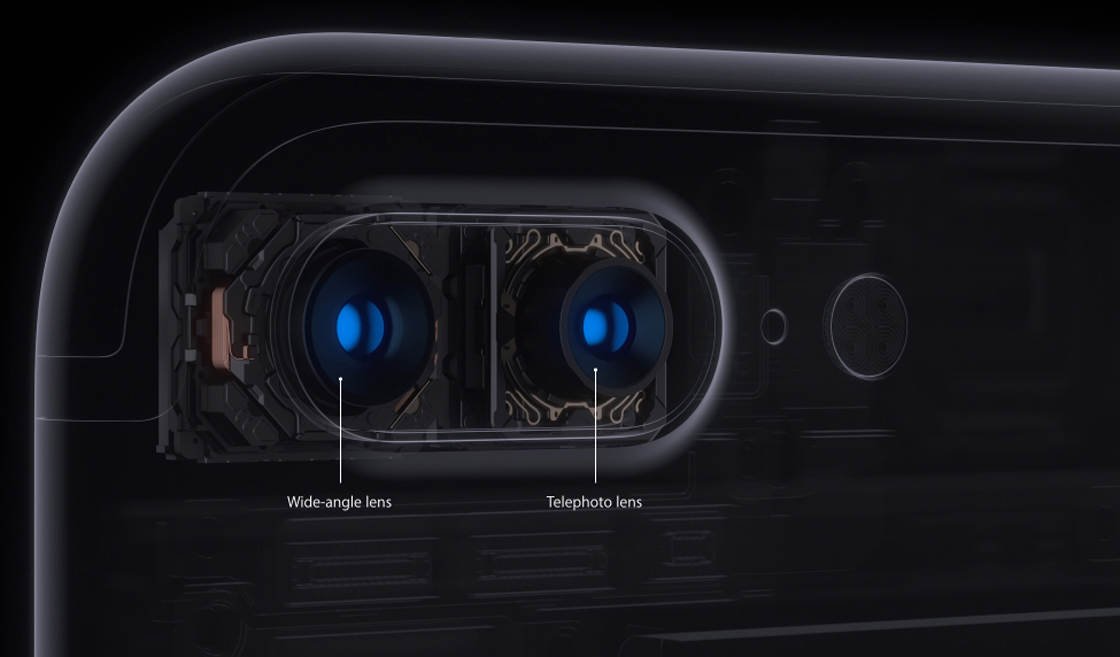 With other models of iPhone, you’d have to attach a third-party telephoto lens like those from olloclip, Moment or ExoLens onto the built-in wide angle lens in order to achieve this telephoto view of your subject.

When shooting with the iPhone 7 Plus, it’s easy to switch between the built-in wide-angle and telephoto lenses.

When you open the camera app, you’ll notice that it says “1x” at the bottom (or right) of the frame. That means you’re currently using the wide-angle lens. 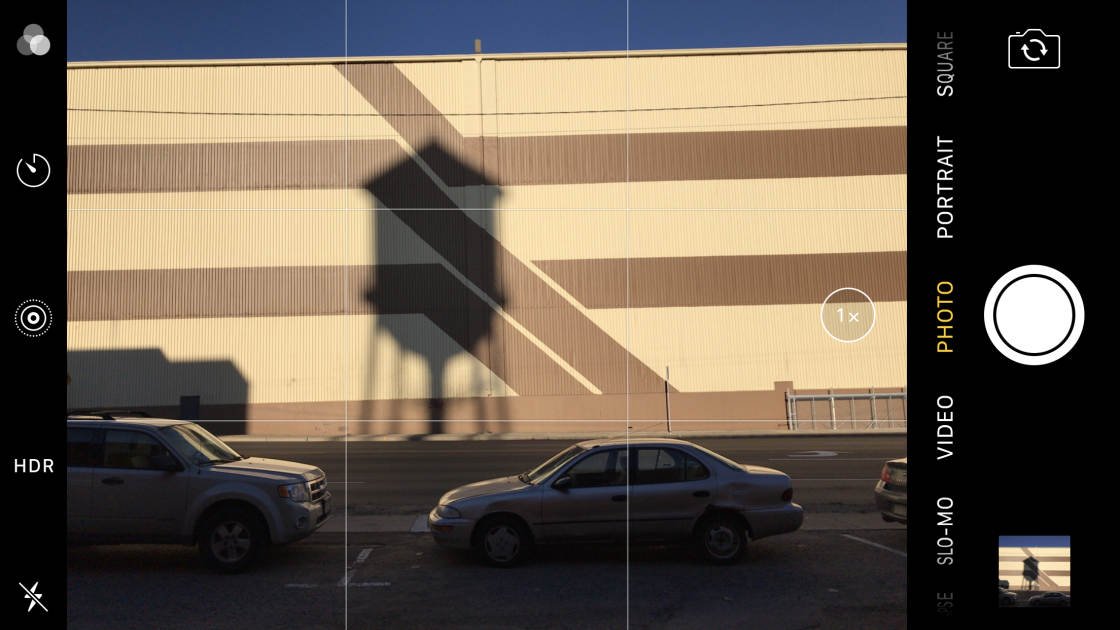 To switch to telephoto mode, simply tap the 1x icon. It will now say “2x” which indicates that you’re using the 2x telephoto lens. 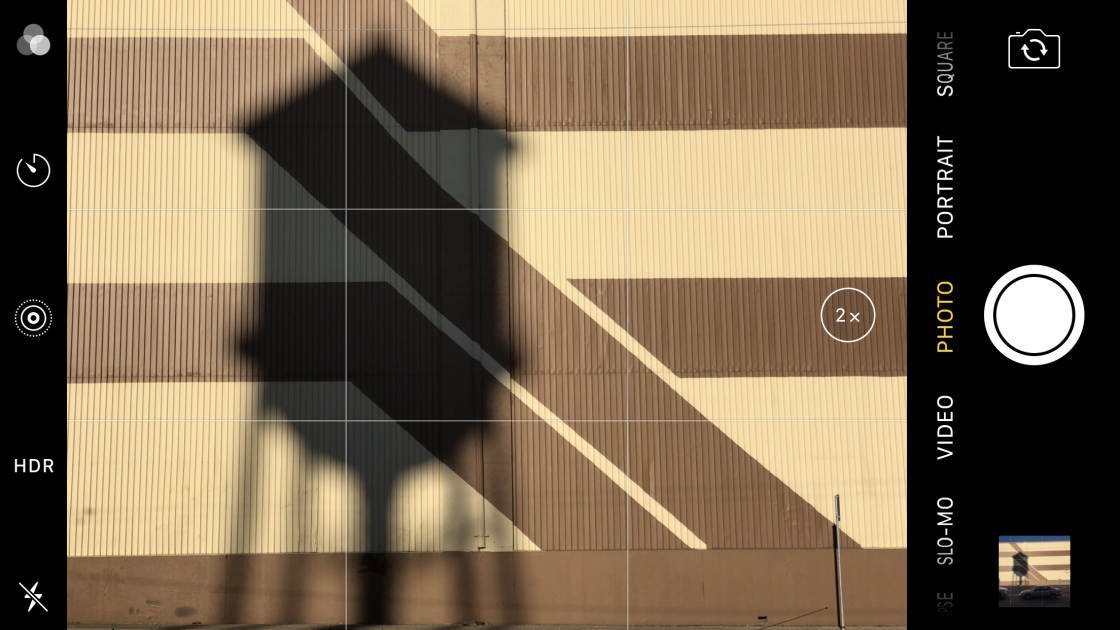 Selecting the 2x option gives you a closer view of your subject. This is great for situations where it’s difficult or impossible to walk closer to the subject.

In the example above, I would have had to stand in the middle of a busy street in order to get the closer view.

Below is an example of using the 2x telephoto lens to capture a closer of my subject without disturbing her and ruining the peacefulness of the moment. The telephoto lens was the perfect way to capture the intimacy of the scene from a respectful distance. 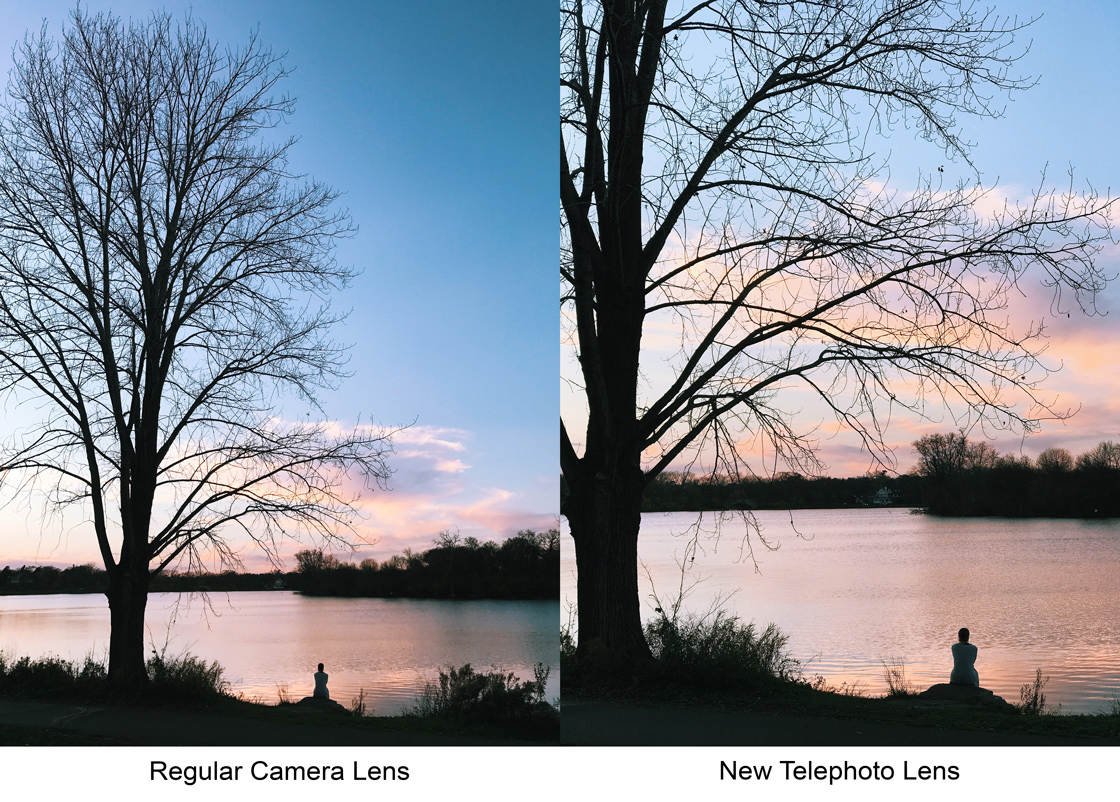 You can use the 2x telephoto function in Time Lapse, Slo-Mo, Video, Square and Pano mode, as well as the regular Photo mode. Being able to shoot 2x in different camera modes gives you more options to express your vision as a photographer.

Remember that one zoom mode isn’t necessarily better than the other. They’re just two different ways of showing the same scene. 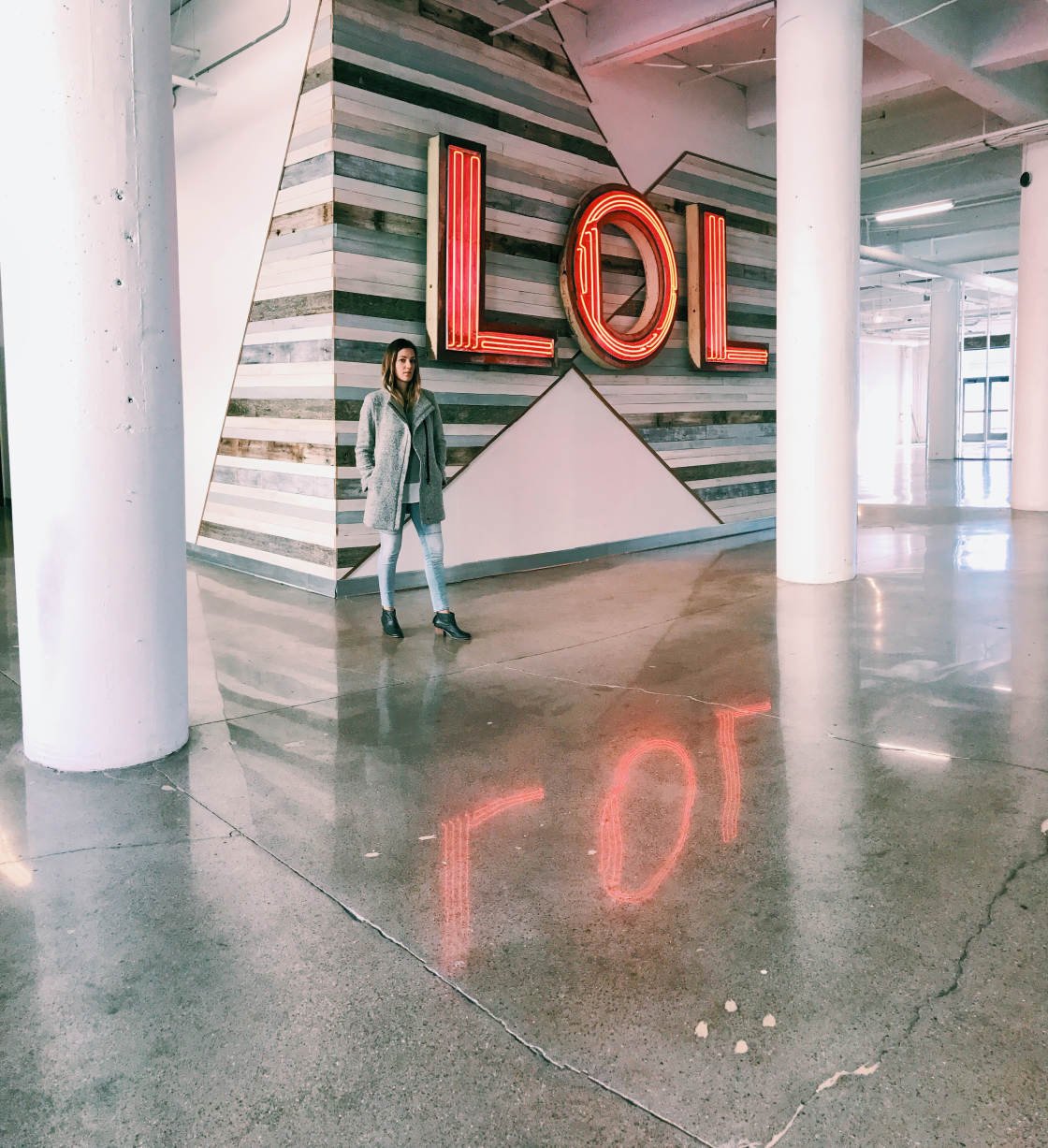 The photo above was shot with the 1x wide-angle lens, and the photo below was shot with the 2x telephoto lens. The two lenses/zoom options allowed me to easily capture two different views of the scene from the same shooting spot. 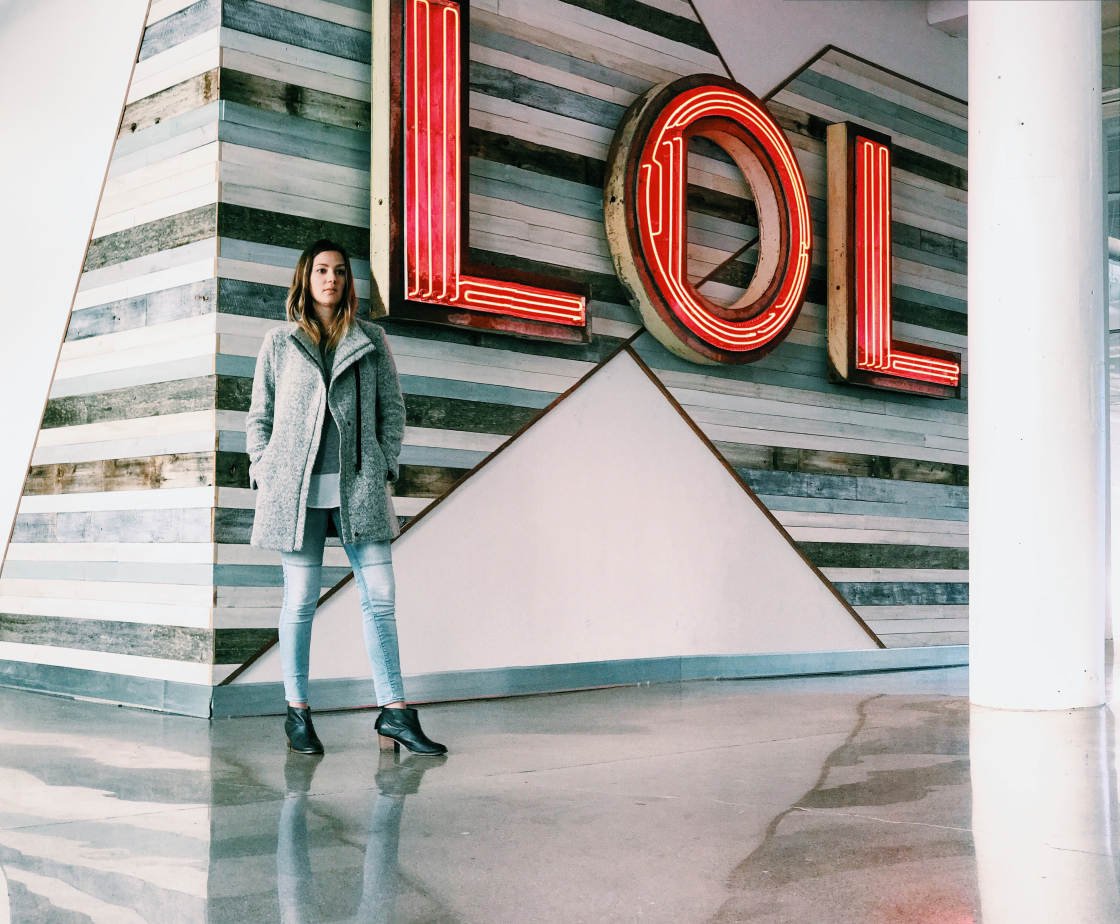 Another thing you should consider when using the telephoto lens on the iPhone 7 Plus is that not only does it make the subject appear closer, but it also changes the relationship between the subject and the background.

Telephoto lenses appear to compress space, making the subject and the background look closer together. 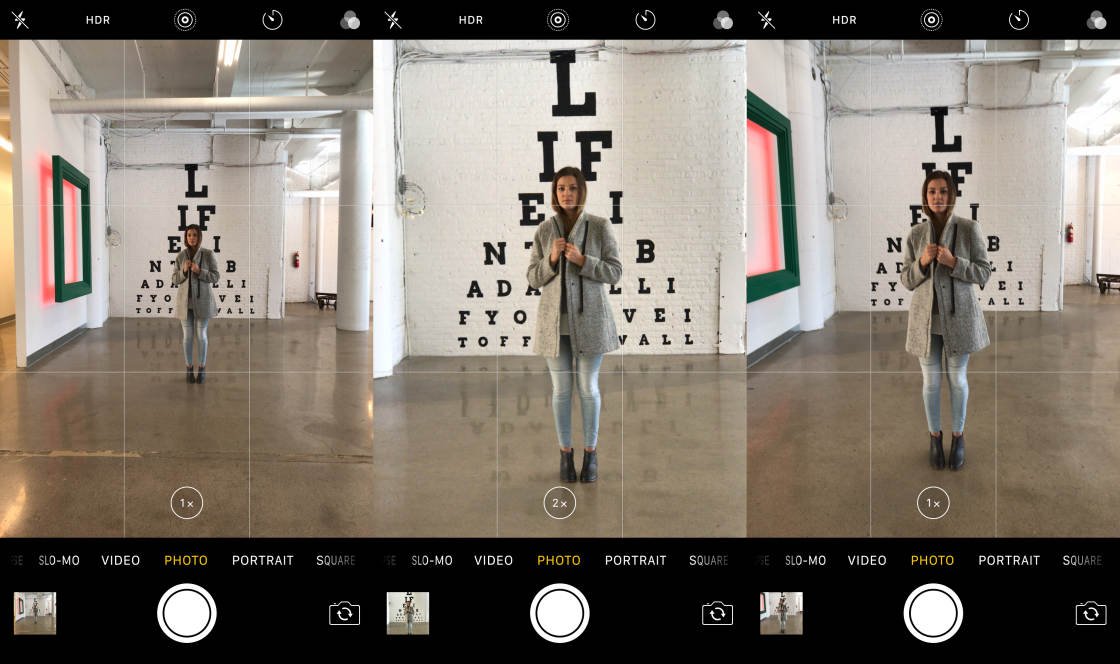 The first two photos are exactly what we’d expect. By changing to the 2x telephoto mode, it makes the subject look a lot closer than it did before. But what’s the difference between the middle image and the right one?

Remember for the third image I walked closer to Rita to frame her approximately the same way that I did with the telephoto lens.

Notice the difference in the relationship between Rita and the background. Even though she’s standing in the same place for both photos, she appears to be closer to the background when shooting with the 2x telephoto lens. 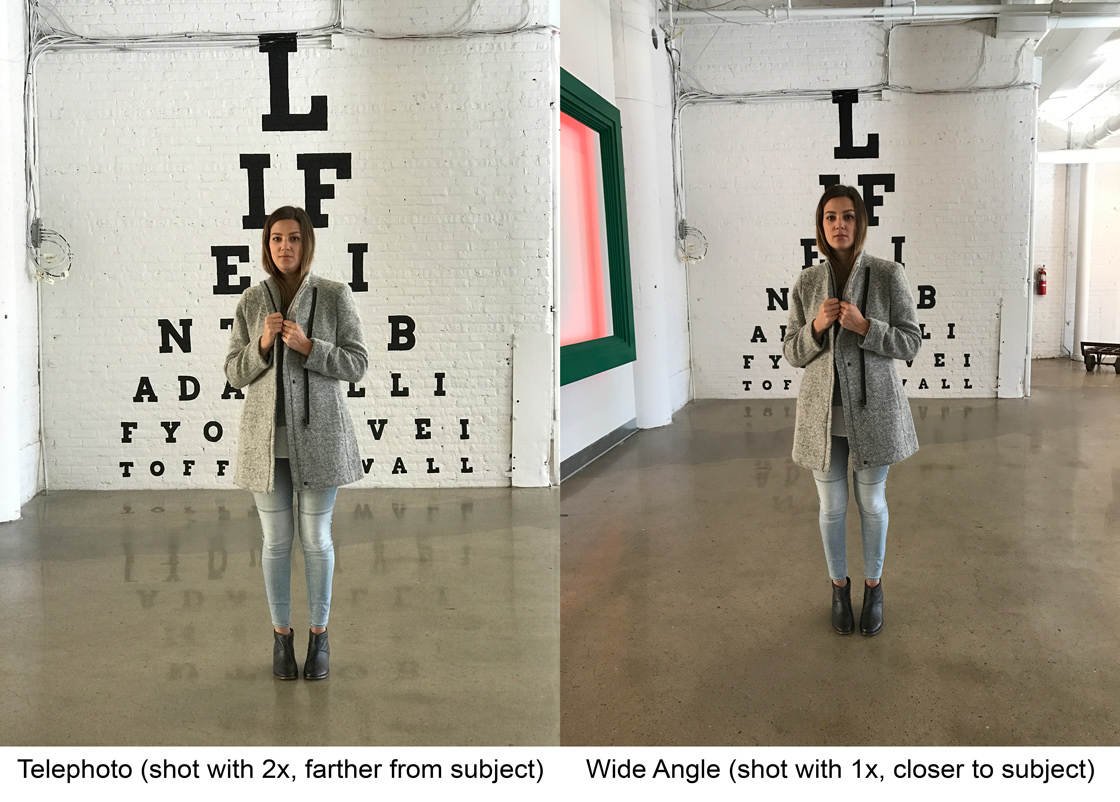 That’s because a telephoto lens compresses space. In other words, it makes the distance between the subject and the background appear to be less.

The example on the right was taken with the 1x wide-angle lens which exaggerates the depth of a photo, making the subject feel farther away from the background.

As well as the 1x/2x zoom option, the camera app also has a digital zoom feature which allows you to “zoom in” even closer.

It’s easy to activate – simply touch the 1x button with your finger and drag to the left. You’ll see that you can now zoom up to 10x closer. 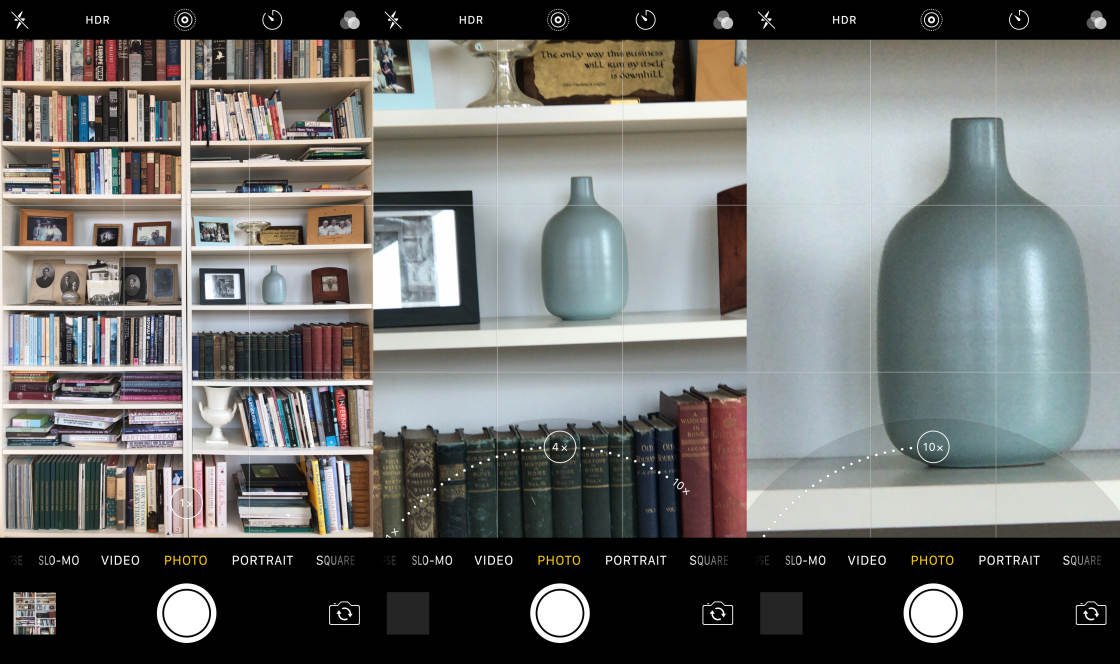 While at first this digital zoom feature might seem like a great tool, the reality is that it’s not the same as having a real 10x “optical” telephoto lens.

To make things appear 10x larger, the iPhone is using a trick which enlarges everything on the screen. But because it’s doing it digitally, it’s really just blowing up the image that’s captured from far away, meaning that everything, including any digital noise, will also be enlarged.

You should only use the digital zoom feature if you absolutely have to. The 2x zoom is fine because it’s using the optics of the telephoto lens to make everything appear closer. But beyond 2x zoom you’re just degrading your image in order to make the subject larger.

Rather than using digital zoom, you’d be much better off “zooming with your feet.” In other words, by walking closer to your subject you’ll get a much better quality photo.

Below you can see the difference in quality by shooting this vase using the 10x digital zoom feature, and by shooting it close up with the 1x setting. Notice how the 10x image looks grainy, whereas the 1x image is clear and sharp. 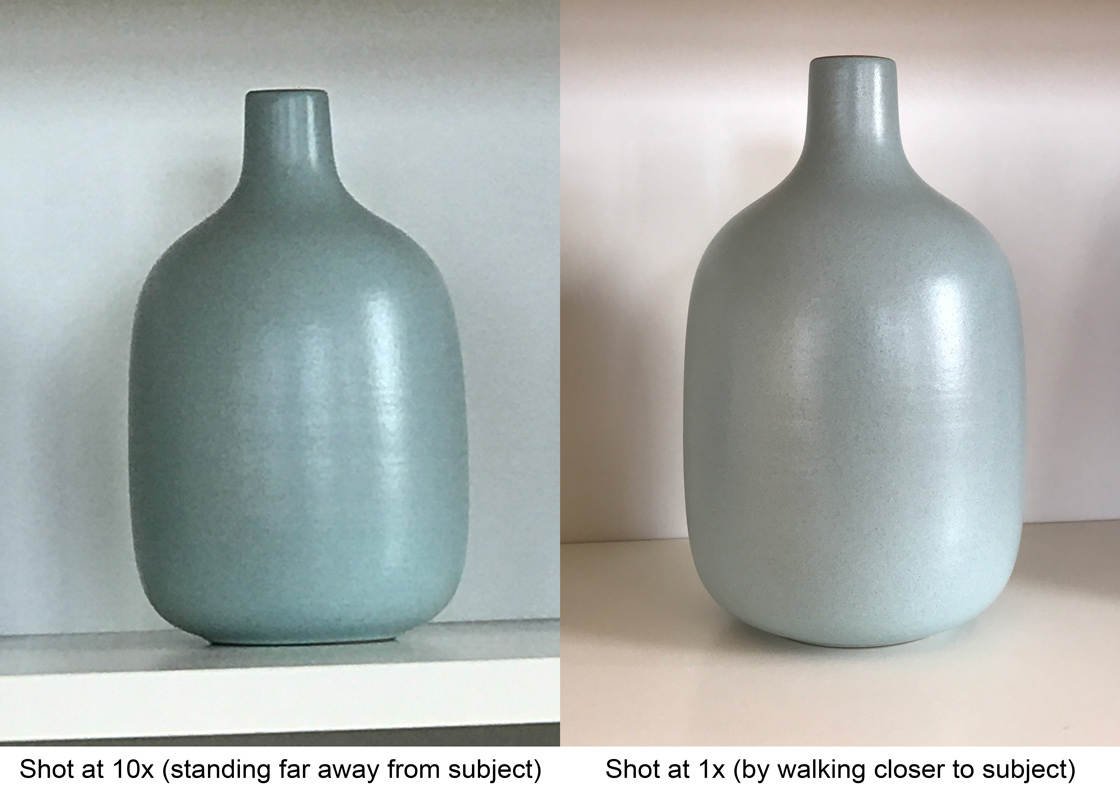 To recap, using 2x zoom is great because it uses the built-in telephoto lens, but don’t zoom beyond that unless you absolutely have to. It’s probably better to shoot at 2x, and then use an editing app to crop in on the photo later if you want to get closer.

Up until now, one of the main limitations with the iPhone camera has been that you couldn’t control the depth of field like you can on a DSLR camera.

Depth of field refers to how much of the image is in sharp focus. Certain kinds of photos, such as portraits, often look better with a shallow depth of field where the subject is in focus but the background appears blurred. 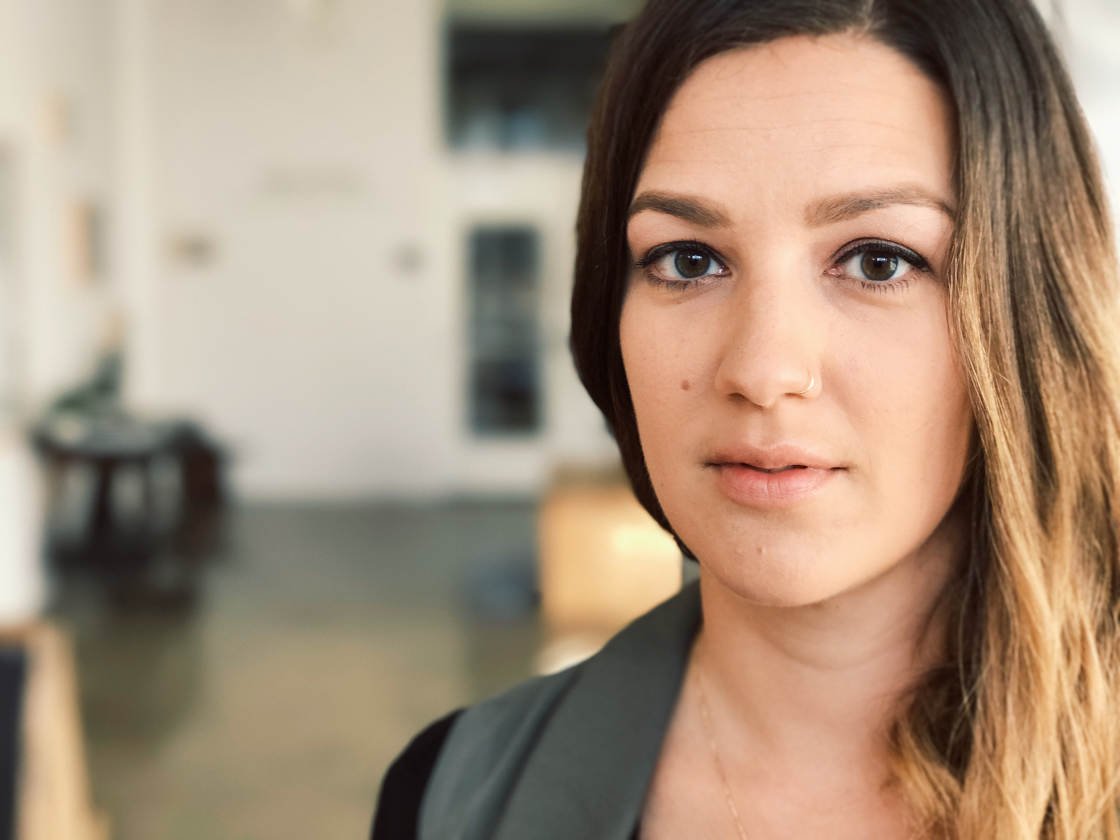 This soft, blurry background is often called “bokeh” which comes from Japanese. Bokeh is highly sought after by many portrait photographers, and is a term worth knowing.

In the past, we’ve mostly just had the option to have everything in focus (unless the main subject was very close to the lens). But the iPhone 7 Plus camera allows you to easily mimic the look of DSLR and other high-end cameras that can capture a shallow depth of field.

This gives you unprecedented control over your iPhone photography. You can now create photos with a dreamy, blurry background, while putting the emphasis on your main subject.

So how do you create this shallow depth of field effect? It’s actually very simple! You just need to select the new “Portrait” shooting mode in the camera app.

As the name suggests, this mode is particularly suited to shooting portrait photos of people. Shallow depth of field isn’t something you typically see in a landscape or architectural photo, where you want to see everything clearly – but it’s standard in portraiture because it emphasizes the person and makes the background secondary. 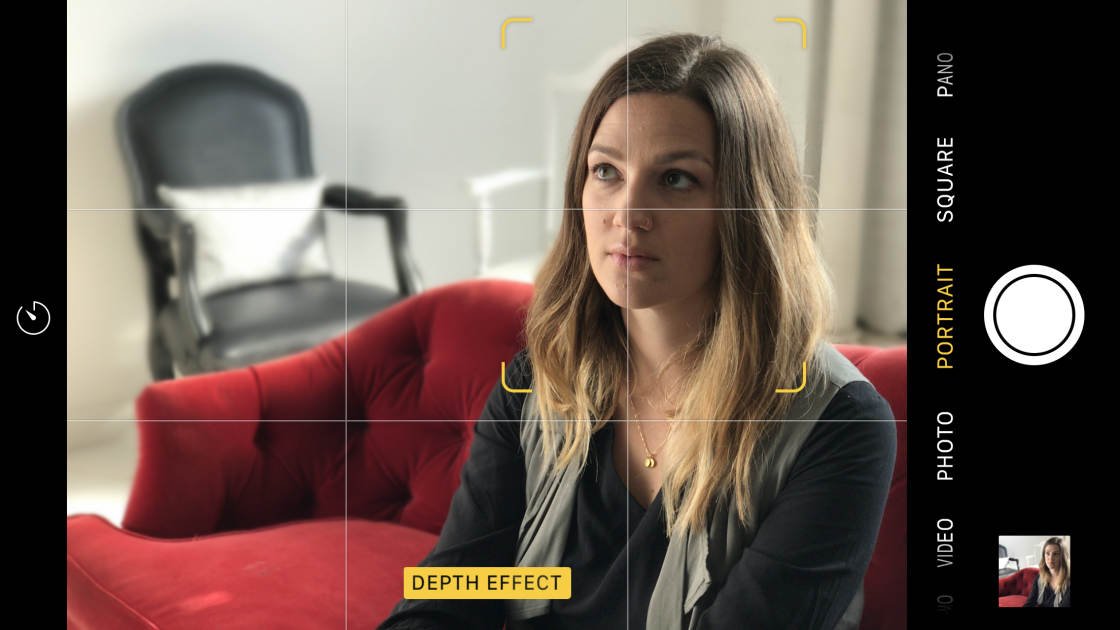 The first thing you notice when you select Portrait mode in the camera app is that everything gets bigger. That’s because the camera automatically switches over to the 2x telephoto lens.

Telephoto lenses are typically better for portraiture as they tend to be more flattering than a wide-angle lens. If you shoot a close-up portrait with the wide-angle lens your subject’s face can appear distorted, often resulting in their nose appearing larger than it is in real life.

When shooting in Portrait mode, the iPhone helps you by giving on-screen instructions. For example, you might see “Move farther away” or “More light required.” Use these tips to help you create the best possible photo.

Once you’re the right distance from your subject, the words “Depth Effect” will appear highlighted in yellow. You’ll also see four yellow crop marks on screen, roughly indicating the face of your subject.

The background should appear blurred, while your subject is in sharp focus. Now simply tap the shutter button to take the photo. 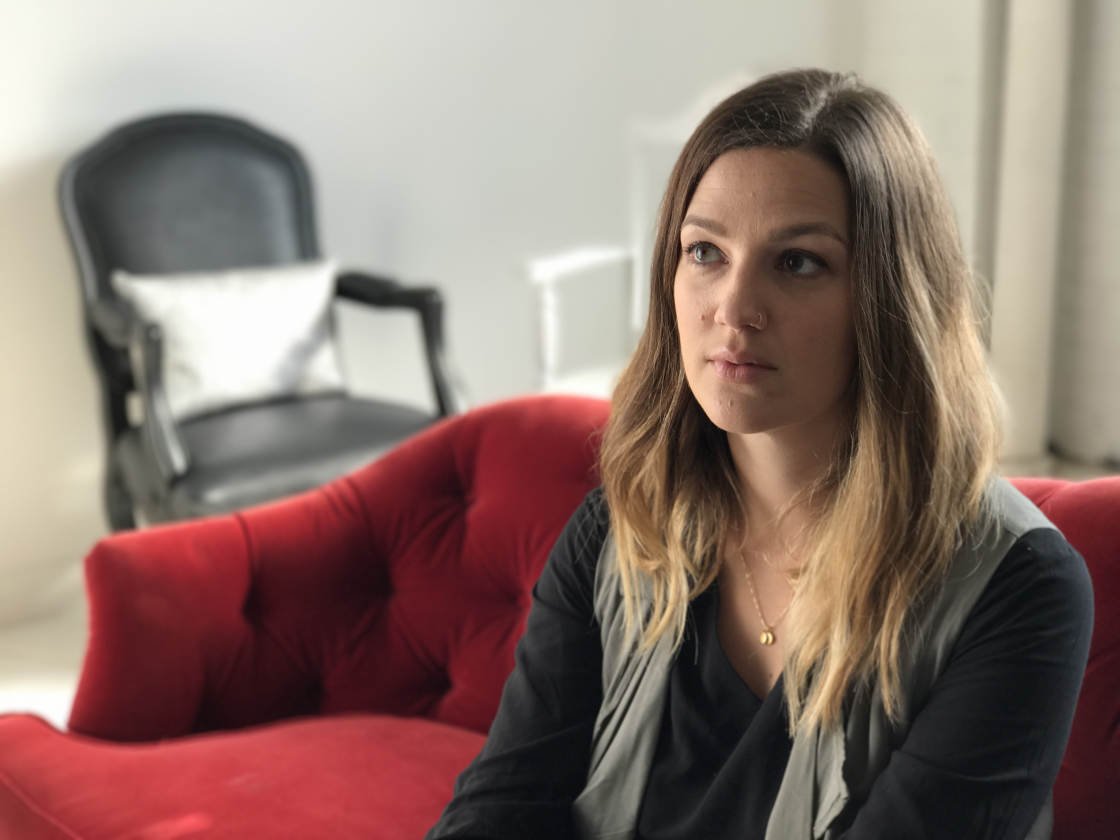 Once you’ve taken the shot, you’ll notice that two versions of the photo appear in your photo library – one with the shallow depth of field effect (shown above) and one without (shown below). 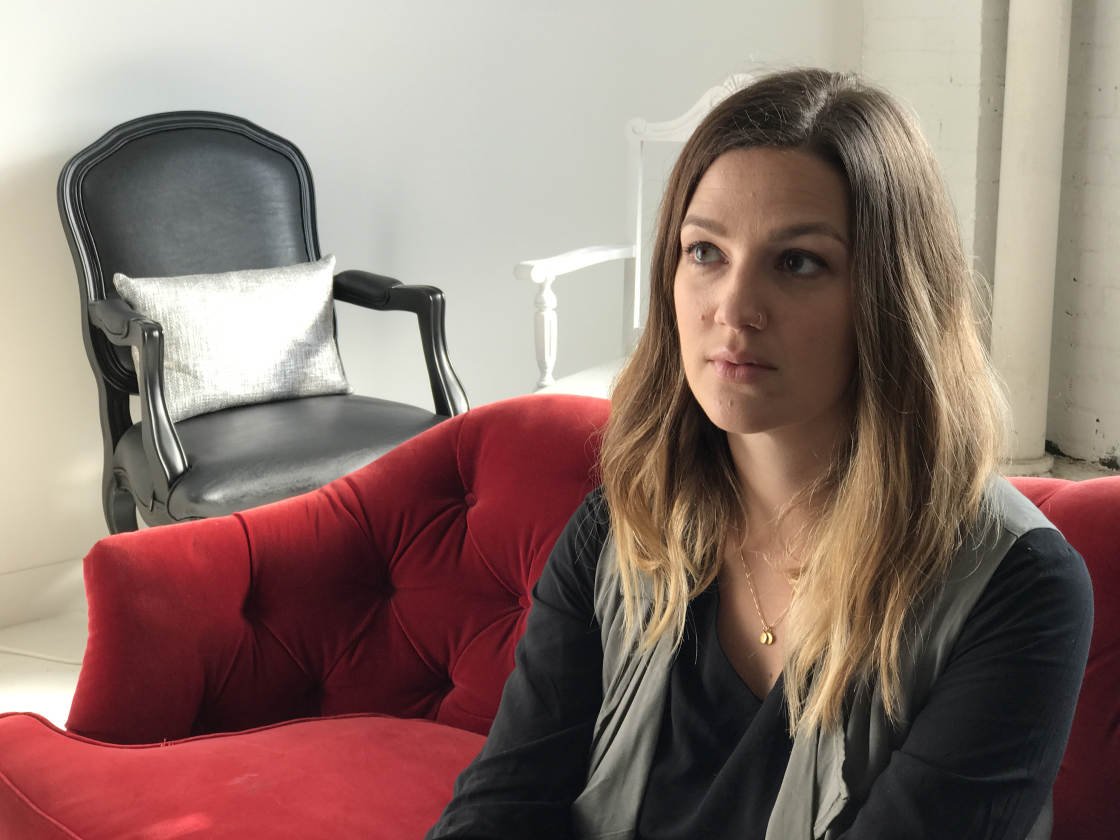 Comparing the two images really shows how much nicer portrait photos look when they have a shallow depth of field.

If for some reason you’re not sure which of the two photos has the Depth Effect, it will be clearly labeled in your photo library as shown below. 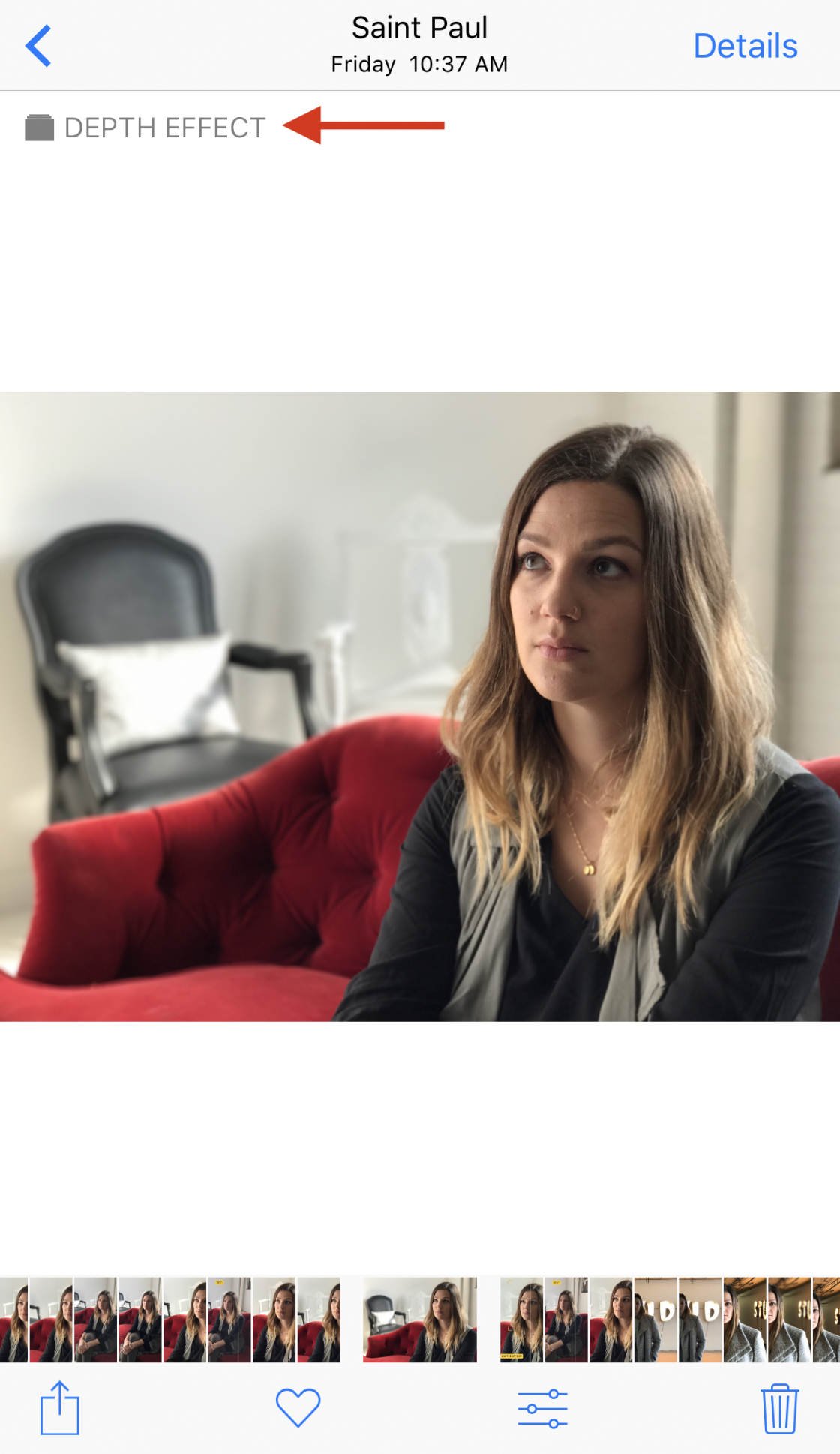 4. The Importance Of Background When Using Depth Effect

The Depth Effect feature in Portrait mode works best when your subject is far away from the background, and when there’s something in the background to begin with.

The farther away the subject is from the background, the more pleasant blur you’ll get. Notice the difference in the amount of blur between these two photos which were both shot in Portrait mode. 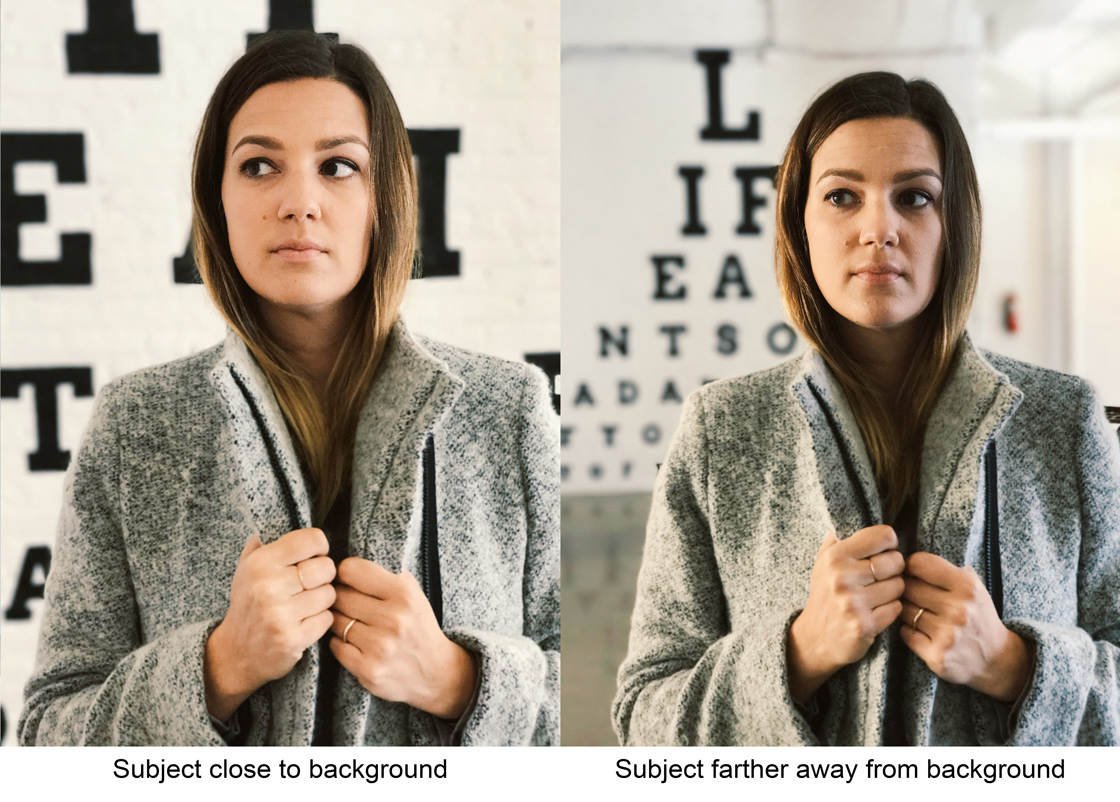 So if you want more bokeh (blurry background), move your subject farther away from the background when shooting in Portrait mode.

It’s also important to actually have something in the background, so that you can take full advantage of the shallow depth of field in Portrait mode.

In the example below my subject is standing against a plain white background. Notice how little difference there is between the original photo and the one with Depth Effect. 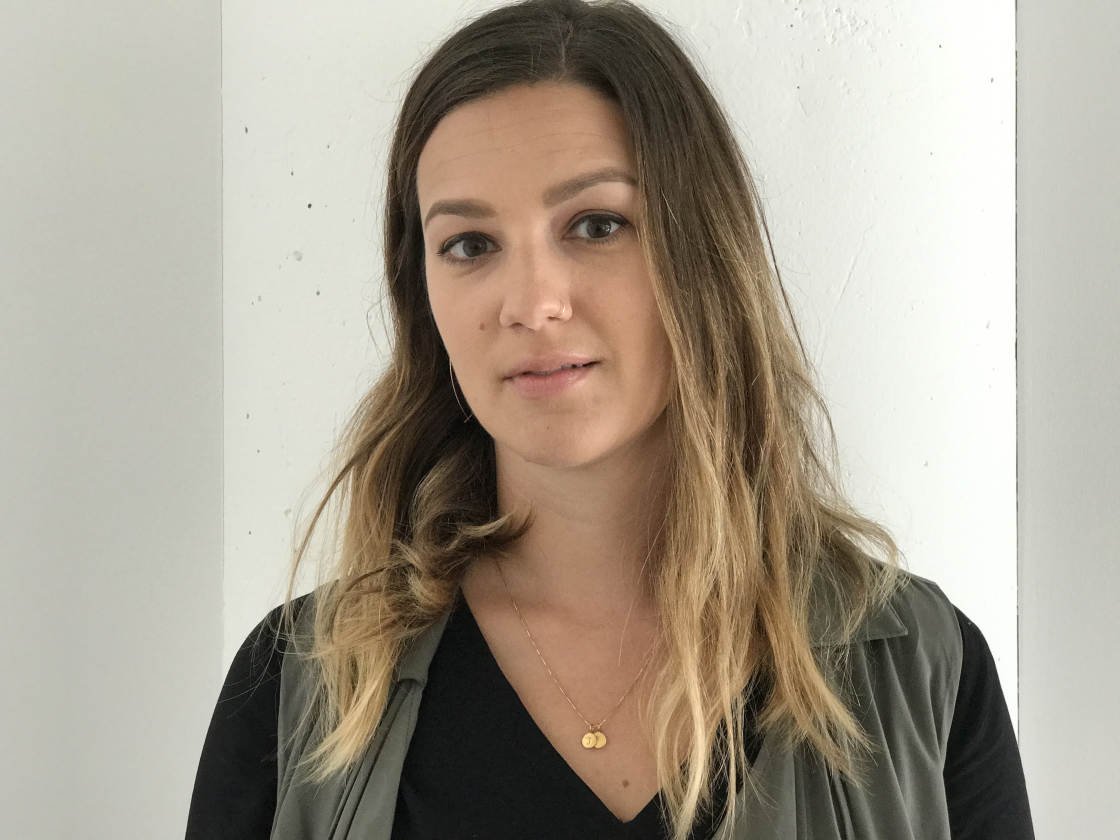 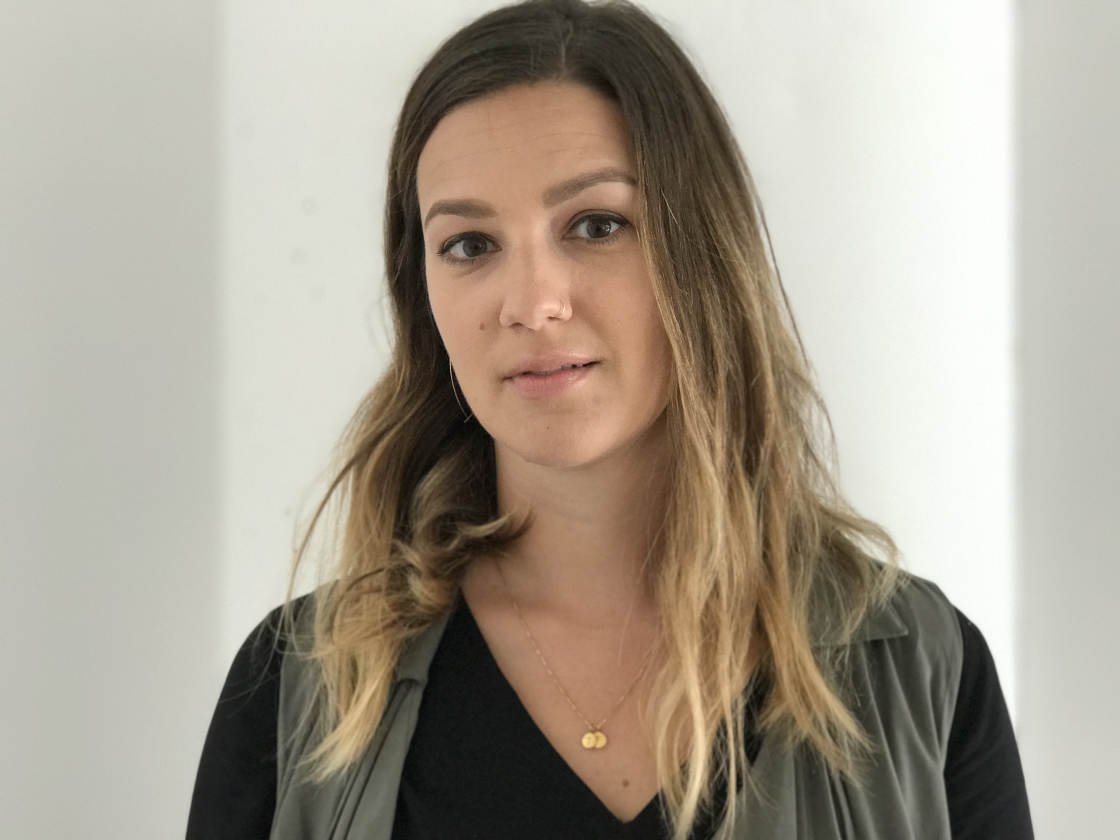 While you can definitely see a difference, and the bottom image with the Depth Effect is nicer, the photo would be lot more dynamic if there were some details on that wall to show the blur effect.

While Portrait mode is great for photographing people, it can be used to shoot other things too! Many subjects look better when there’s a soft dreamy background. 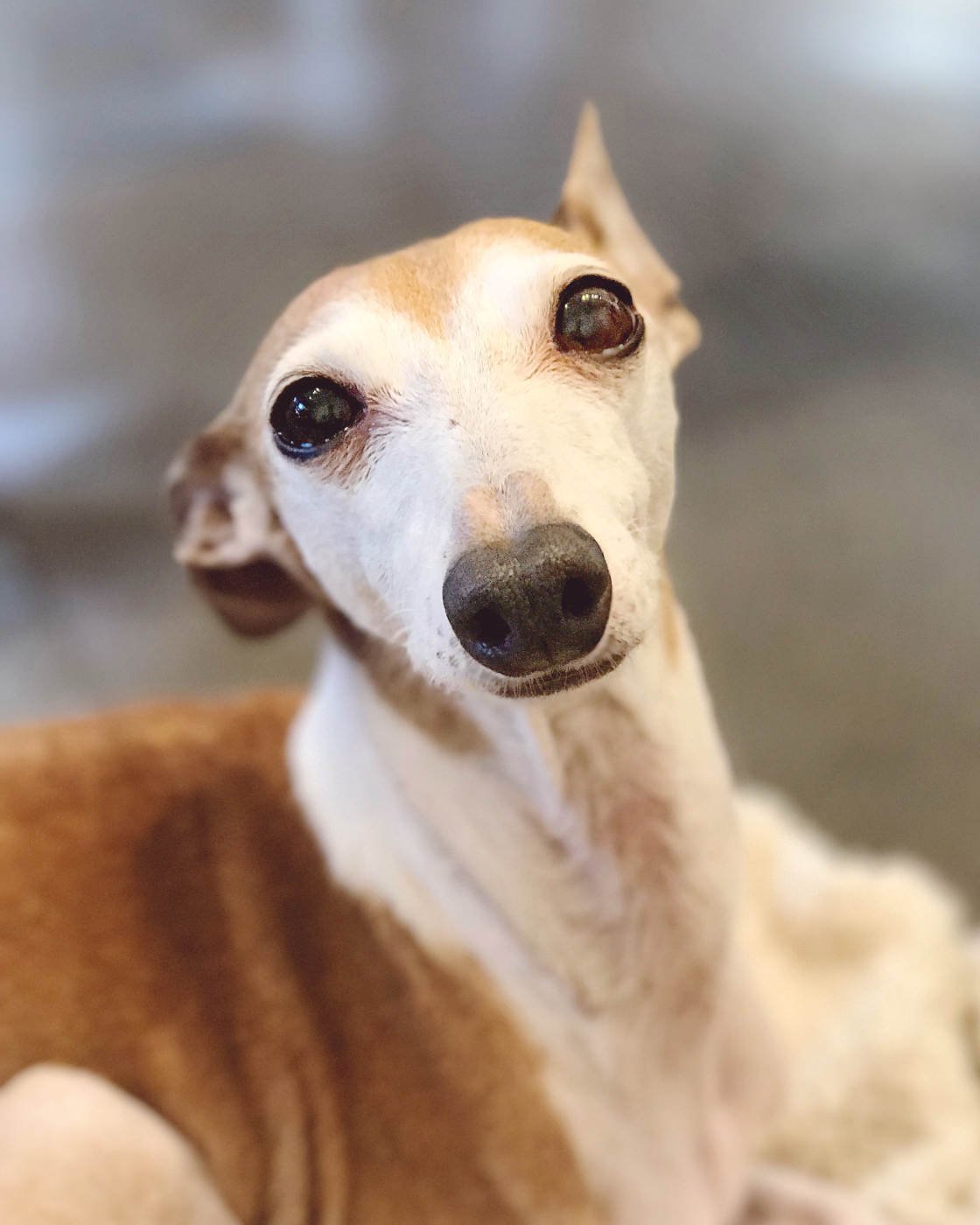 Using the Depth Effect in Portrait mode is great for photographing animals, as well as inanimate objects. 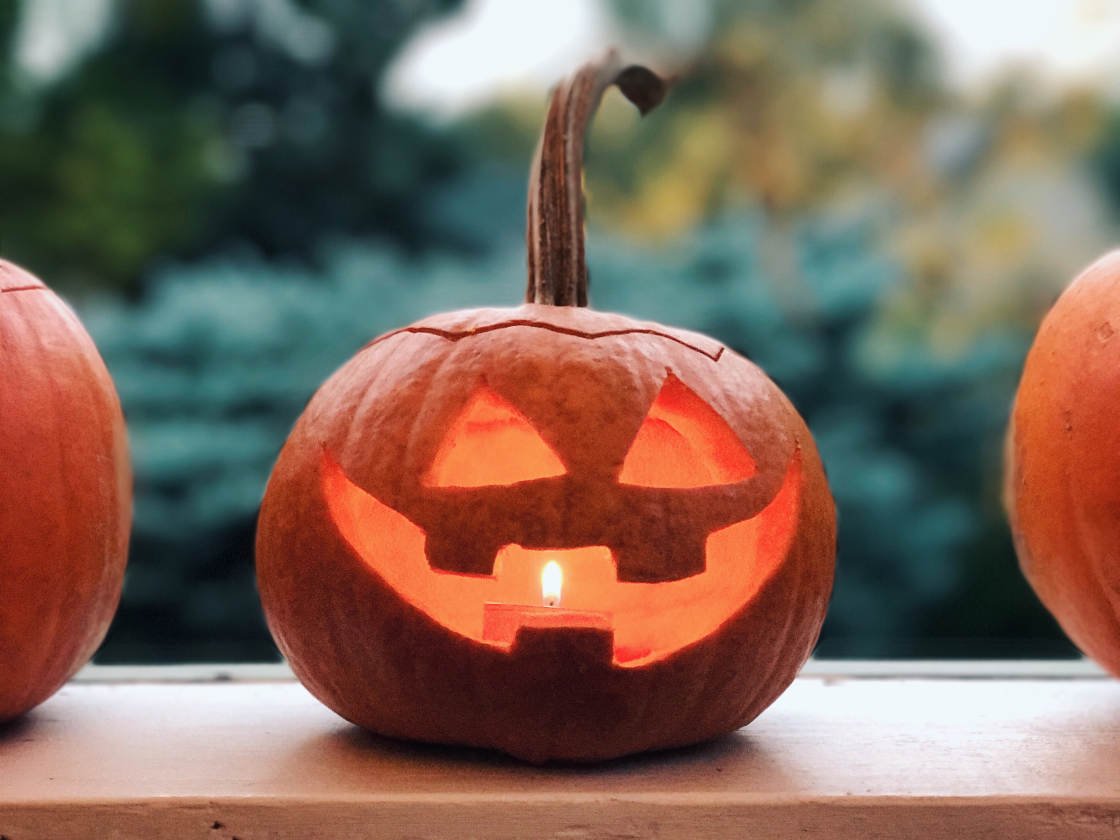 Creating a shallow depth of field is particularly useful in situations where the background is very busy and distracting. By blurring out the background detail, it puts the focus onto the subject in the foreground.

6. The Regular Camera Is Great Too!

With all the excitement about the new 2x telephoto lens and the Portrait mode Depth Effect on the iPhone 7 Plus, it’s easy to forget that the camera takes great pictures using the wide-angle lens and the regular camera modes that you’re already used to. 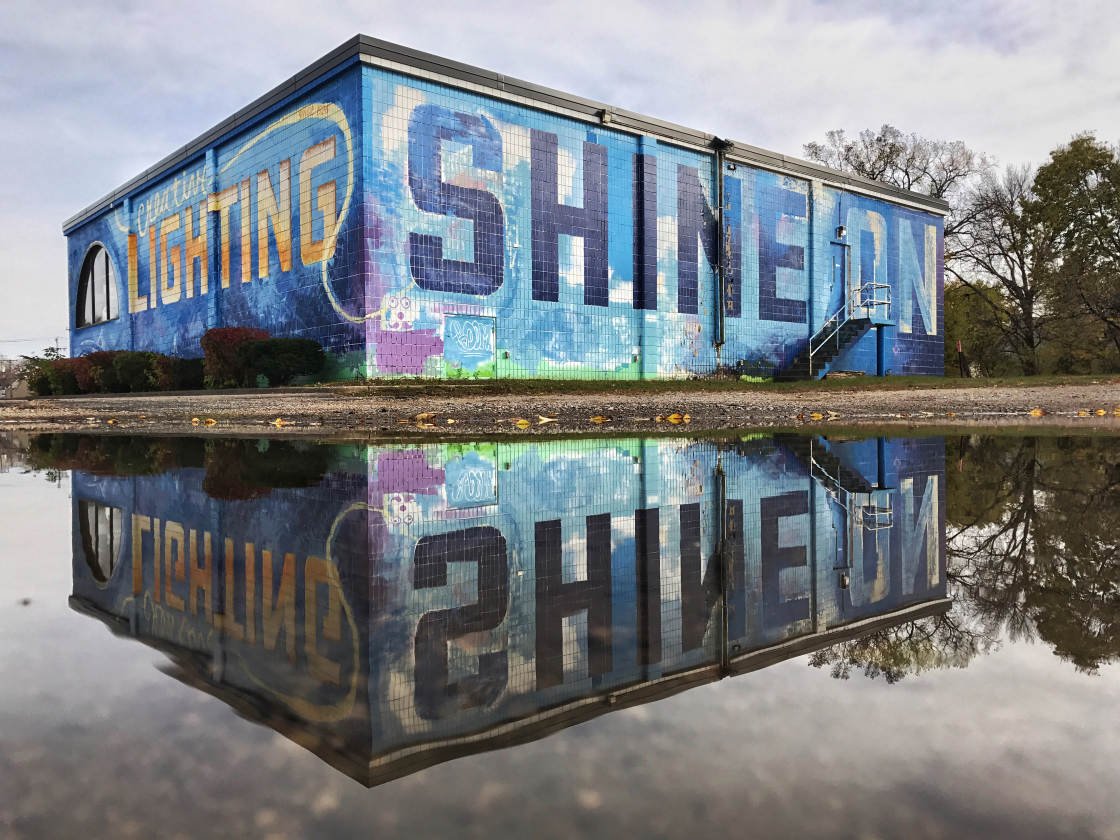 The image quality is fantastic, and the huge screen is bright and vivid. While the larger size of the iPhone 7 Plus might take a bit of getting used to if you haven’t previously owned a Plus model, the increased screen size makes it much easier to see what you’re doing. 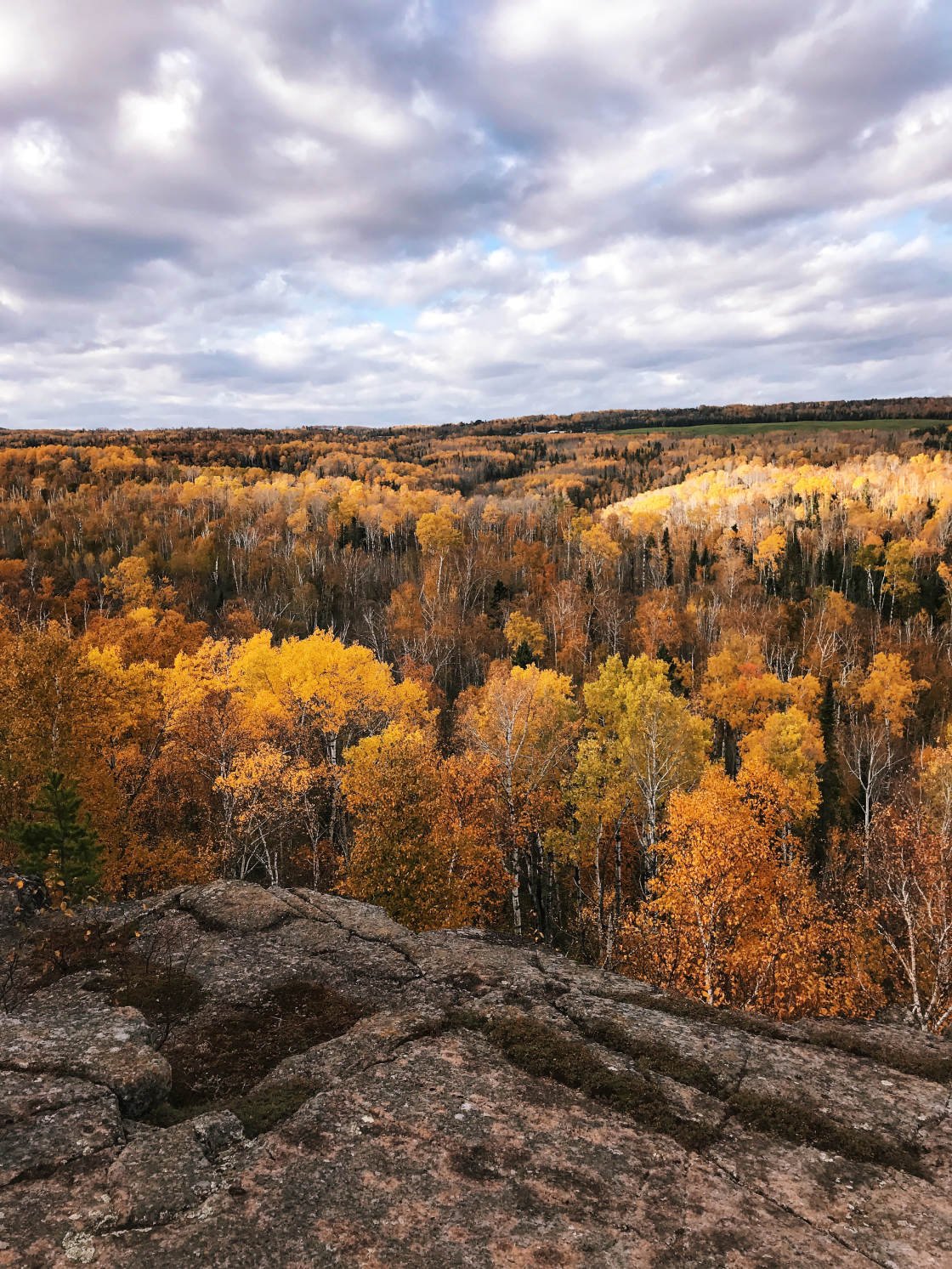