I’m really happy to share an interview with Mohsen Chinehkesh, a talented street photographer from Tehran, Iran. In this inspirational interview you’re going to discover Mohsen’s best tips for storytelling, taking photos of strangers, developing your creativity and so much more. 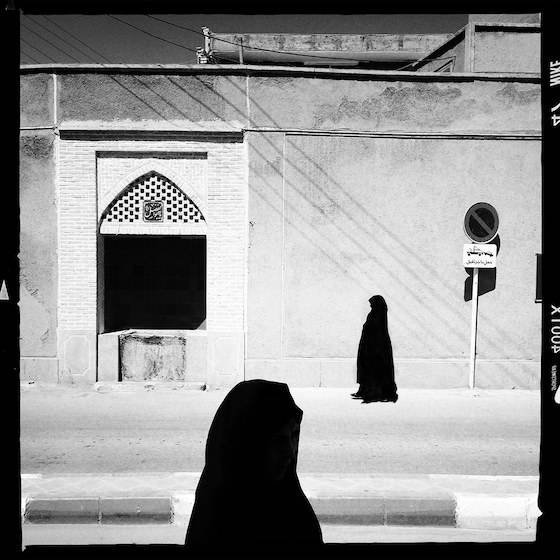 First of all let me thank you for inviting me for this interview. And since it’s still January, I want to say a happy new year to you and all of your readers. I wish you all a great year full of memorable happy moments. 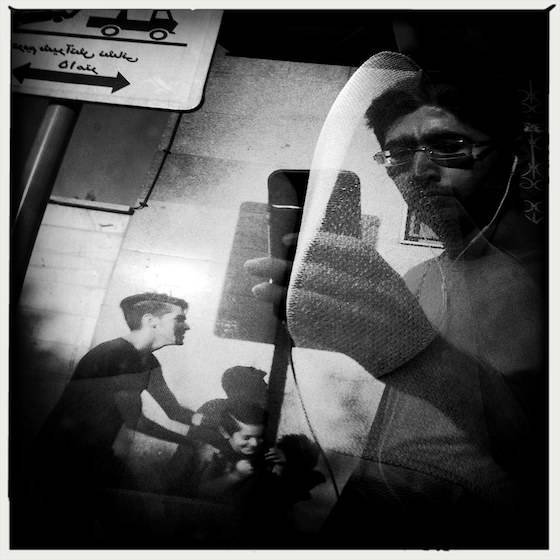 From the view point of this article I’m an Iranian mobile street photographer. Definitely you didn’t mean to hear this little from me! Well, I’m a graphic designer, who is going to get his MA degree from Tehran University of Art, working for a big distributor of musical instruments and interested in music, art, design, technology and philosophy!

Everything began with my introduction to an online community of Iranian mobile photographers called Fotomobers. Initial formers of the group had their goal to increase awareness for the possibilities of mobile photography among Iranians. 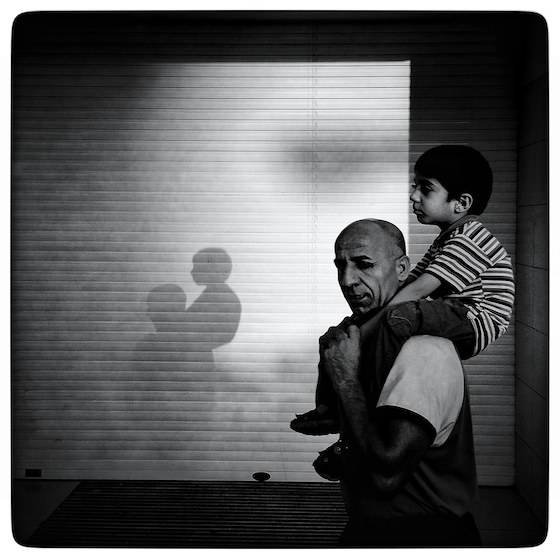 Street photography was the main theme of the community and the idea of using an iPhone to photograph people without being noticed really grabbed my attention. I’ve always been fascinated by capturing people but using a camera has never served what I need in this field.

I had a mid range Android phone at the time and I started shooting with it. After a while I found if I want to be a professional I need to have a professional tool, so I bought my first iPhone and became a so-called iPhoneographer.

As I mentioned before, street photography is the only thing that inspires me to use an iPhone for taking photos. 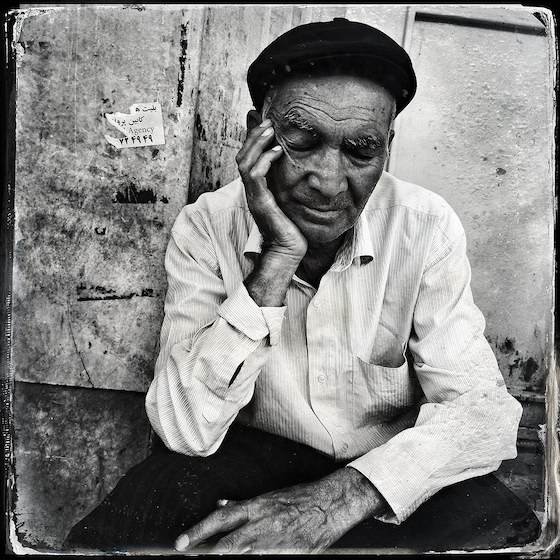 When I started using iPhone for this purpose my goal was to stay unnoticed by the people I’m capturing. But after about one year of mobile street photography I’ve come up with a new idea: I use my iPhone because I want people to notice me instead of my camera while I’m shooting!

You primarily take street photos. Why do you prefer this genre over the other genres of iPhoneography?

If you don’t mind, I would like to answer this question in the reverse order! For me, if there was no street photography, there would be no iPhoneography! So it makes more sense for me to speak about why I prefer iPhone over the other available tools. 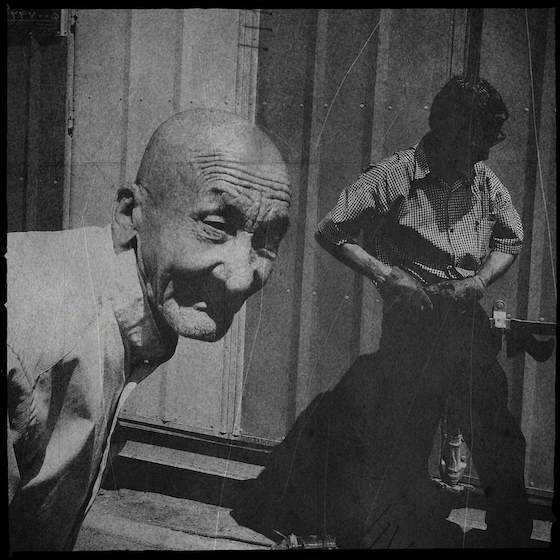 Mobile street photographers talk about iPhone being easy to handle, available all the time, suitable for uninterrupted capturing, editing and sharing process and so on. These are all true and also true in my case, but the basic reason for me is that it makes me able to interact with people in their natural mood.

Sometimes I get too close to people and it makes them curious about what I’m up to. If they see a camera in my hand, at the best they won’t be in their natural mood, and more likely they will leave the place. 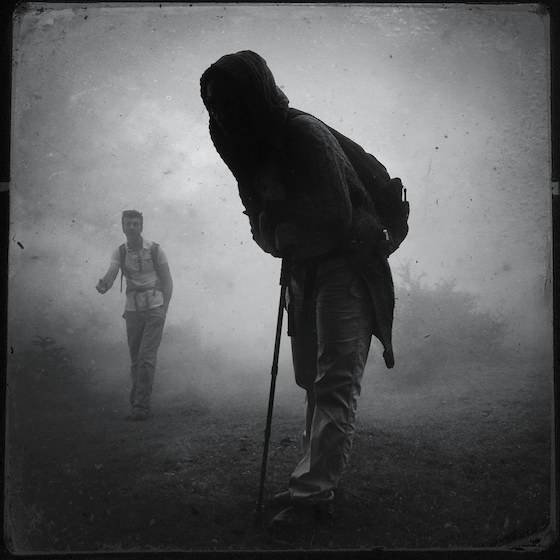 Well, I think I’m at the edge of being a so-called Hipstographer. In fact I’ve been using Hipstamatic Classic in a regular basis since the beginning of my iPhoneography career. Hipstamatic Oggl opened a whole new level of freedom but I believe it has ruined the unique status of Hipstamatic Classic photographs to some extent. 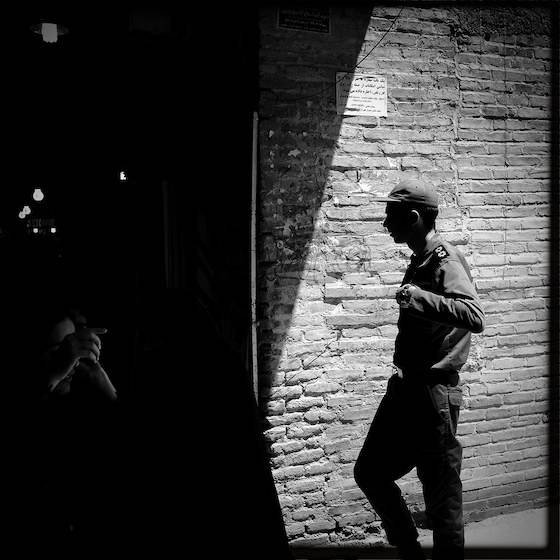 No doubt Snapseed is my first app in this list. It fills almost all the basic editing needs for me. Rarely I use Filterstorm for fine tuning my photographs. Finally if I decide to add some flavor to my photos, I usually use Mextures, Lo-Mob and sometimes ScratchCam. Hipstamatic Oggl also can be named in this list. It sounds more like a filtering app to me.

Do you use any accessories for iPhone photography?

Nothing more than a very simple case to protect my iPhone against possible impacts and my EarPods which sometimes I use as the shutter button. 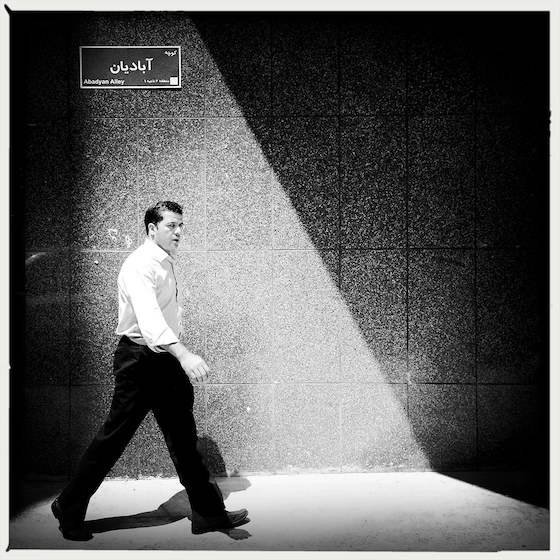 Third: Be passionate about what you do not what you use.

Last and most important: Forget all that I said and find your own unique ways! 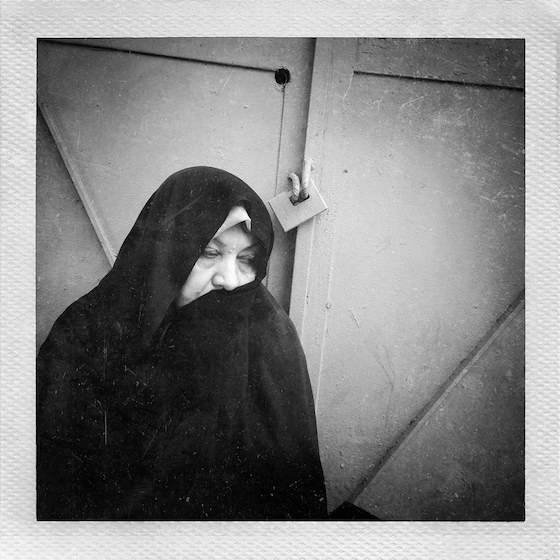 Can you briefly explain the story and editing behind your three best iPhone photos?

Well, these are not necessarily my best shots, but I found them interesting to be described, mainly because it might be useful for your readers. 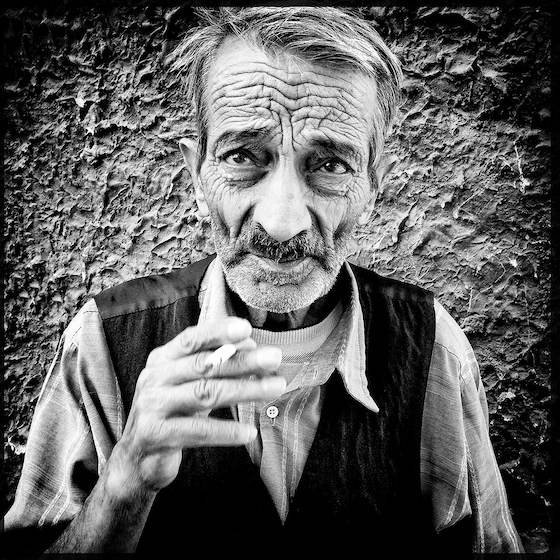 The first photograph is one my recent shots and part of a series I shared on Instagram as the ambassador of the French magazine, Paris Match. Capturing elderly people is one of my passions since I can feel the emotions of a long life etched in their face. I noticed this old man smoking on a corner of one the most crowded streets of Tehran. He was standing in front of a café and the harshly textured wall works pretty well as a backdrop.

I stopped in front of him and began playing around with my iPhone. This is a technique I use to comfort people when I get this close to them. People, at least Iranian people, will get anxious if you get close to them and point your iPhone at them immediately. After a short time, I held my iPhone in front of my chest and used my headset to trigger the shutter.

He was looking at my face and, needless to say, the lowered angle of the camera has played a very important role in making this picture. This picture is a good example of the idea I mentioned before: The old man obviously has noticed me but he didn’t notice my camera. I captured this photo with the native camera app. After some minor adjustments with Snapseed, I imported it into Hipstamatic Oggl and used the combination of Watts + Rock BW to get the final result. 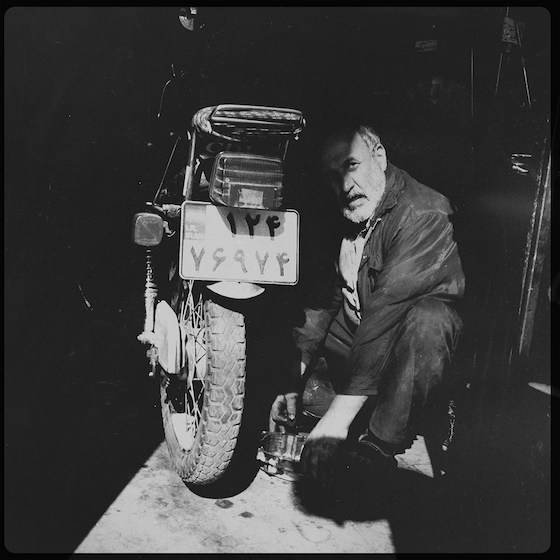 Second photograph has been captured by the Hipstamatic Oggl using the combination of Madalena + Rock BW without any further processing. It was about 9 am and I was in a hurry to get to work on time. I noticed this motorcycle repairman working in his little garage while the morning light was penetrating through the semi-open door.

The combination of light, shadows and people always fascinates me. So I forgot about my work, stood next to his door with the iPhone in my hand. While my arm was resting next to my body, I bent my head forward to cast a shadow over him and then I captured the photo with the headset. In capturing these kinds of self-portraits Lee Friedlander has had a great influence on me. 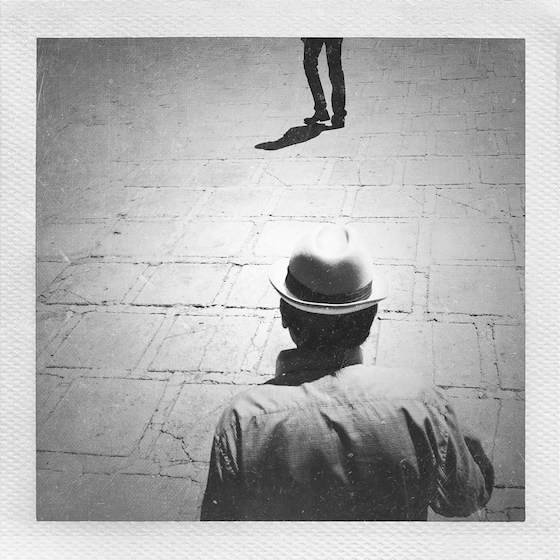 Third photograph comes from my past summer trip to Isfahan. It was captured at the Naqsh-e-Jahan square which is the second largest square of the world after Tiananmen Square in Beijing and one the most important historical sites of Isfahan.

I noticed a man with a hat passing the square while I was shooting and Since I can’t refuse to capture a hat-men, I followed him looking for a proper moment. Finally when the second guy joined the scene I raised my hand over the hat-man’s head and triggered the shutter with my headset.

The shot was initially captured with Hipstamatic Classic and then I used Snapseed, Lo-Mob and Mextures respectively to reach my desired result.

Street photography is all about storytelling. Do you have any tips for telling a great story in photos?

I think the key to be a great storyteller is to understand the very own nature of photography. Photography is more about to hide than to show. One might wonder to hear it. In fact it’s the nature of any kind of art. Art shows and hides at the same time and this is what makes it powerful to have a mysterious impact. 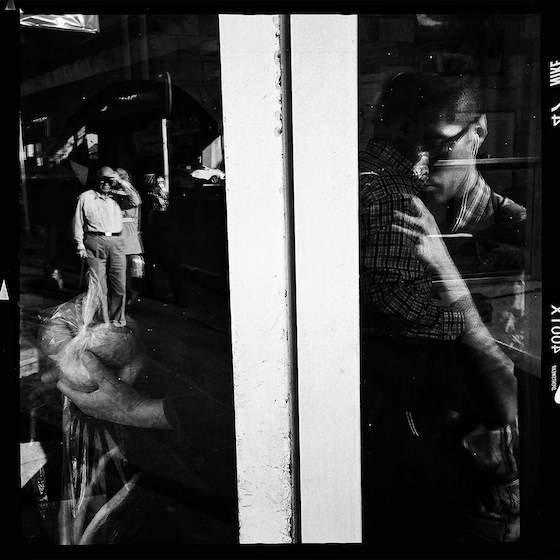 The mysterious mind-provoking power of a photograph not only comes from the things it shows but also the things it hides. Albeit a photograph, whether its photographer intends it or not, always hides something, but talking about this theoretical issues exceeds the topic of this article.

To be a great storyteller one should put enough cues in a photograph to attract viewers’ mind and trigger the flow of signification but reserve enough free space to let them work on it and project their own feelings and experiences on the picture.

In practice there are endless ways to do that but at least it shows how important the framing of a photograph could be in terms of making it a storytelling medium since it deals with the selection of visual cues of the picture. In a short word, storytelling is not about making things clear but about wrapping them in an envelope of mystery. 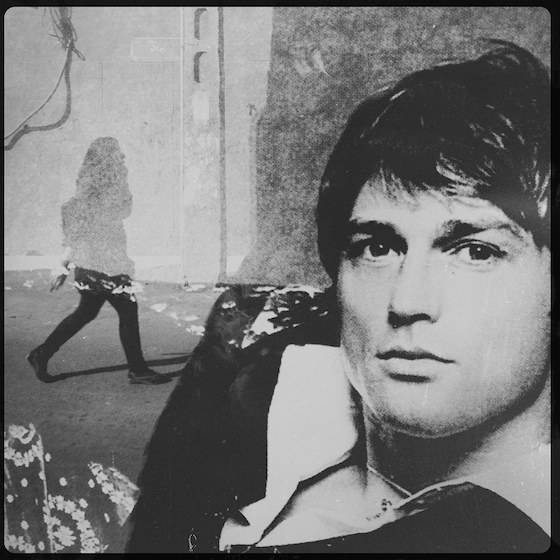 The number one thing new street photographers struggle with is taking photos of people they don’t know. Do you have any tips for getting over that fear?

I believe the most important factor is one’s curiosity and passion. If you have enough motivation you’ll enjoy going beyond your comfort zone and face your fears. But it’s better not to put too much pressure at once. Every time, go one step further and after awhile you’ll find yourself comfortable to get very close to strangers. Just be patient and follow your passion.

But to give more practical tips, let’s talk about some techniques. I learned these techniques from Richard Koci Hernandez and it helped me a lot not only to get over that fear but also to build my own photography techniques.

Always wear your headset. It makes people think you’re listening to your music and probably they won’t pay much attention to your presence. You can also use it as a shutter button and it helps to cover your true intention. You can even mimic being on a phone call and shoot. These are just some initial ideas and surely one can take them further to make his or her own techniques.

You can find me @mohsen_ch on Instagram, EyeEm and Oggl. I launched my own photography blog and it includes a gallery of my iPhone shots, too.