Today I’m really excited to feature the full story behind MobiTog, the original mobile photo community. With thousands of members from across the globe, MobiTog is an amazing place for sharing, discussing and learning mobile photography. In this interview you’re going to learn more about this unique community and the people behind it. 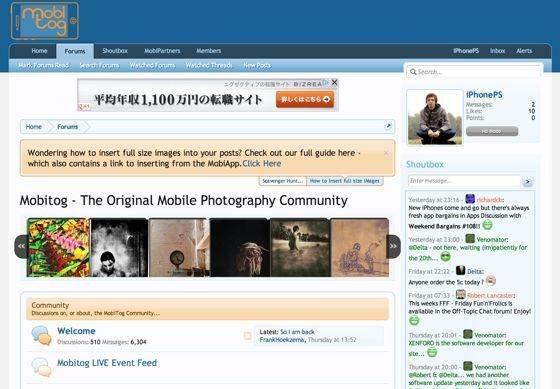 Before starting the interview, I’ll let the founders of MobiTog tell their story.

The original idea was developed by Matt (Smooth) Cooper and Roger (Venomator) Gilbert in late Summer/Autumn of 2010.  MobiTog.com went Live at the end of October 2010. We launched using SMF – standard website forum software traditionally aimed at the computer/programming generation.

MobiTog was born because mobile phones had reached the stage where their following of photographers and increasing use for photography was really taking off in a big way, it was going global at a crazy rate. The iPhone’s camera, for example, was producing extremely acceptable quality images. Coupled with, or without apps, these images were becoming fantastic pieces of work which heralded the iPhoneography/Mobile Photography debate…

Matt and Rog identified a gap for a community-based site that would encourage the sharing of, commenting on and learning about the production of mobile photography images. There were other websites offering mini tagged-on forums, but these were all ‘bolted on’ to the side of websites with entirely different and inconsistent primary objectives. 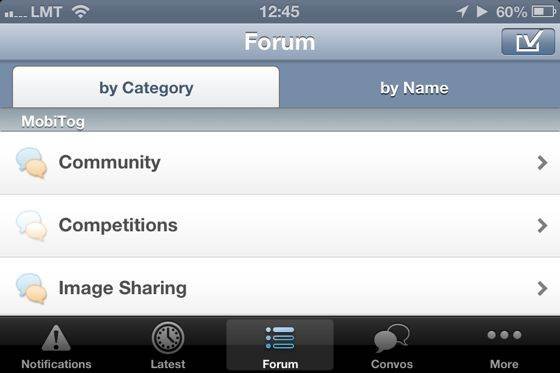 There were lots of places (too many!), and still are, for mobile photographers to post their work to – but none made any attempt at any serious kind of community, as this was, generally, secondary to the posting of the images themselves. Flickr, at the time, was perhaps the best example of this – post an image and the comments section was always sparsely used and very rarely, if ever, in real time.

MobiTog.com has always seen mobile photography differently, as a very serious medium; one in which people will develop, improve and offer experiences and guidance, on sites like MobiTog, which are definitely not just a “look at what I just ate/drank/did/took!” environment!

In May 2011 Rog & Matt felt the growing MobiCommunity deserved more. From listening to a membership who were critical of the friendliness of the site software we were using, we were finding people were not revisiting the site. Although some absolutely amazing mobile photography was being uploaded to the MobiGallery in high quantities, it was not being posted to threads for comment and discussion. 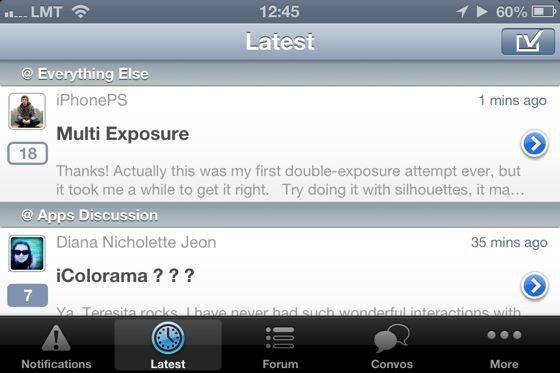 We did some research with our, then existing members and were pleasantly surprised at the significant level of insightful and detailed responses! The main feedback was that our members felt the site was not very intuitive or visually attractive and they would love to have a branded app to use, preferably not paid for!

Midway through May, Roger and Matt sat down and discussed options. We decided then the website needed fairly heavy investment in new software and a MobiTog branded app.

The field of mobile photography was, and is still, growing, so it was a bit of a gamble whether there would actually be enough demand to warrant the investment. We agonised over all the website software options and how we could produce the app!  At the end of May we took decisive action and developed MobiTog 2.0 – which included the new, user friendly, much improved software package and our very own app released into Apple’s iOS App Store. 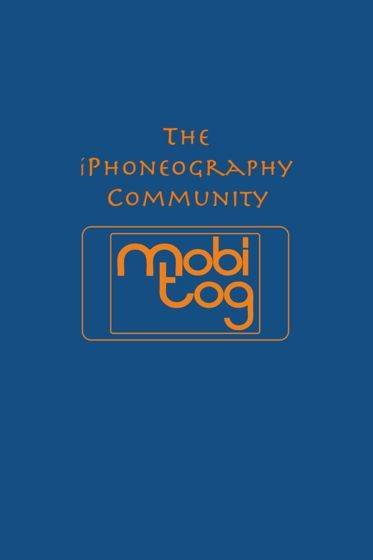 Our initial goals were to be a MobiTography community offering serious commentary and learning facilities complete with an arena/community centred around this rapidly developing medium. We wanted MobiTog to be one community – with Phone Artists, Phone Photographers and everything between, catering for all ages and different skill levels, coming together to share their images and produce and discuss fantastic imagery with like-minded, addicted persons.

As the medium is so accessible we wanted mobile photographers, around the World, to be able to share their worlds, their lives, their photography.  We wanted to help them, through a friendly, mutually assisting, community life, to develop and enjoy taking mobile photography images and share them around the globe, easily.

Since starting MobiTog the number of photography apps in the App Store has grown many-fold and is still increasing, so we also now have a very busy app discussion and review section complete with a multitude of very active App Developer members!

I wanted to find out even more about MobiTog and the people behind this amazing community, so I also did a short interview with Matt and Roger. In this interview they share more insights about MobiTog and what it means to them, as well as their perspective on mobile photography in general.

In a nutshell, what is MobiTog and who should join it?

Mobitog is a derivative of Mobile PhoTography and, as its name implies, we are a community of like-minded photographers and artists who are dedicated to the new art form that has taken the world by storm these past few years – taking photographs (and using Apps to edit and post-process them) with a mobile phone.

Any mobile photographer, using a mobile phone, or similar mobile device such as a tablet, iPad and so on, serious about the art form will benefit from joining MobiTog.com – the original global Mobile Photography Community.

How did you decide to create MobiTog?

Having been members of a traditional photography forum for many years, before starting to take mobile phone photography rather seriously, Rog & Matt tried to convince the owners of a said photography forum to spawn a group for the growing band of Mobile Photographers that were posting stuff to the group. Sadly, they declined the offer and left us feeling homeless and wounded but, convinced of the need for a community for the emerging art form of Mobile Photography.

Shortly afterwards Matt approached Rog with the germ of an idea – there was an obvious gap in the market for a sharing, caring community of Mobile Photographers and our interest in the art form was growing to the point that traditional photography was increasingly taking a back seat. So, why not start a dedicated Mobile Photography Community of our own?

How is MobiTog different from other mobile photography communities?

Honestly?  Because its members make it different!  MobiTog’s members  are simply passionate about their work and they love nothing more than sharing it with other, like-minded, passionistas and appreciate nothing more than talking, learning, teaching and coaching each other about the subject.

MobiTog.com caters to all ability levels and ages of mobile photographers and, totally unconstrained by geographical boundaries, we really do enjoy a truly global membership.

What are the most popular discussions on MobiTog?

Crikey, that is a real toughie!  It is genuinely difficult to separate discussions in such a clear cut way.  All discussions are popular, but the reality is, we are, first and foremost, a community of photographers who like nothing more than sharing their work, or asking for advice and critique from other members, who may have more experience in the art form, or have specialised in one of any number of apps, or multi-app processing.

MobiTog.com also has a very strong App Developer member base. A number of our Developers have been very active and they do tend to generate an excellent response from MobiTog’s membership.

What is the most rewarding aspect of running MobiTog?

Both Matt and Rog believe the greatest reward stems from our contribution towards furthering the global art of photography using a mobile device. We are passionate about encouraging all mobile photographers to develop further into passionate mobile artists, capable of taking impressive photographs with their mobile devices. Sharing their art with the world, through MobiTog.com, is making a difference and changing the face of photography for the future.

Do you plan to add any new features or functionality to MobiTog?

At this point, as you might expect, we will plead the 5th Amendment, or in true tradition of the art form, do an Apple!  Actually, yes, we do have a number of really exciting plans, new features and functionality all coming to a MobiTog outlet near you, in the very near future. But really, would you expect us to spill the beans right here, right now? Invite us back in a month or two and we will tell all, maybe…

You’ve been following mobile photography for a while now. Where do you think it’s headed in the future?

Mainstream, infinity and beyond…

The iPhone is currently the most popular camera in the world. Considering the recent announcements, do you think Apple can maintain this position?

For the foreseeable future, it has to be a resounding, yes. There are some great cameras, on a multitude of phones, out there and they must be taken seriously, of course. MobiTog.com has some phenomenal photographers from other platforms and we will continue to encourage mobile photographers using any mobile phone/device to join our global community.

But, back to the question – Apple are finally indicating they really are aware which side their bread is buttered, following the totally unexpected, but exciting nonetheless, approach to camera improvements in the latest upgrade, we believe the camera will be a key element of all future upgrades to Apple’s offering.

We could be in for even more exciting times in future as Apple and its competitors fight it out for top spot – the consumer and Mobile Photographer can only benefit along the way!

Could you briefly explain the story and editing behind a recent mobile photo?

MobiTog.com has some hugely influential and experienced mobile photographers and artists.  We asked one of our longest serving MobiMembers, Catherine Restivo (RoseCat) to provide her response to this question – we did not influence her choice of image or words in any way! 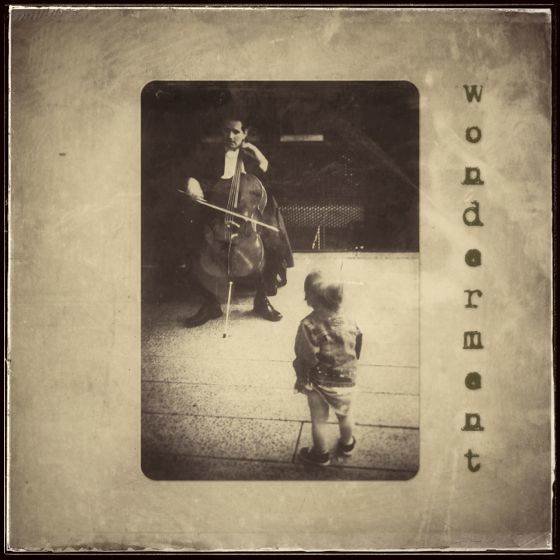 Here is Catherine’s reaction in her own words:

One of my favorite places in New York City is The High Line, a beautiful public park created on abandoned train tracks elevated above the city. Like most public areas of NYC, it’s filled with people from all walks of life, including street musicians and performers. This little toddler was completely engaged in listening and dancing to the man playing classical music. I felt so lucky to have stumbled upon the scene and to have been able to capture the moment.

I took the shot with my iPhone 4 using Hipstamatic’s Jane lens + BlacKeys Supergrain film. I then ran it through Snapseed, adjusting brightness, contrast, structure and center focus. The Selective Adjust tool was used to brighten the musician a bit, and bring him out of the shadows.

Next I applied Lo-Mob‘s Slide 2 frame. This was then brought into AltPhoto and the Daguerreotype B&W Vintage filter was applied. I used the opacity slider to adjust the intensity of the filter.

To achieve more grunginess on the frame I used Repix, painting on scratches, dust and stains. Phonto was used to apply the wording along the right side of the frame. A final run through Filterstorm to resize and sharpen finished the project.

www.MobiTog.com – it is very simple and FREE to sign up to THE Original Global Mobile Photography Community.  You won’t know what you have been missing until you join a real community of passionate mobile photographers!