Today I’m really happy to publish the interview I did with Andy Butler, a passionate iPhone photographer and the founder of Mobiography website and digital magazine for iOS devices. 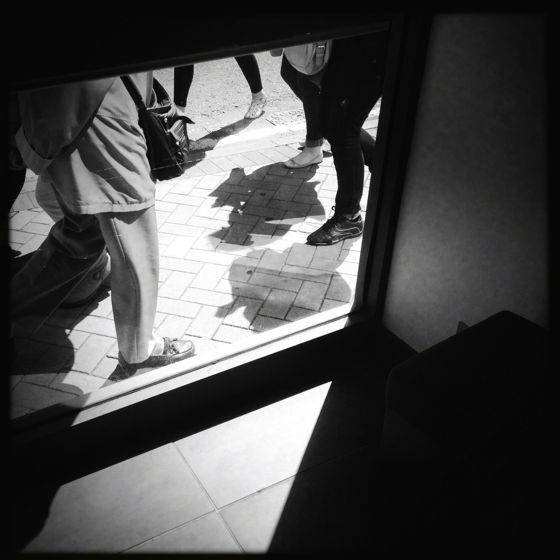 In this interview you’re going to learn more about how Andy approaches iPhone photography and get some insights about the work he’s doing in the iPhoneography community.

I live in the UK in the North of England. By day I work as a digital development consultant for a PR and marketing agency, which basically means I design and build websites as well as consult on the internet marketing of them. Outside of this I run the mobile photography website Mobiography and the supporting digital magazine for the iPad and iPhone at the same name.

How did your journey in iPhoneography begin?

My journey started back in May 2012. I’d heard about this app called Instagram but as I was an Android user at the time my previous searches for it had failed. Then one day I tried again and there it was. From then on I was hooked. 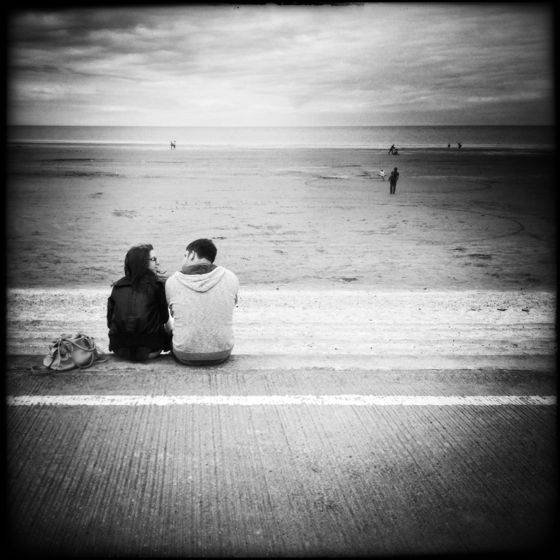 I have always had an interest in photography but have found carrying a big DSLR very cumbersome and impractical for everyday use. I loved the fact that my mobile phone is always with me, it’s accessible and allows me to connect with others and share my stuff. It was like a breath of fresh air discovering mobile photography. Earlier this year I finally upgraded to an iPhone and I’m really glad I did. The quality of the images it produces and the availability of apps are fantastic.

Why did you decide to create Mobiography?

Towards the end of 2012 I started to think about setting up a website about my mobile photography work and use it as a way to share the things I was learning. In the beginning it was mainly about the images I was shooting but as I started to connect with more people online, it started to evolve into a way of showcasing the talents of others and letting them tell the stories behind their photographs. 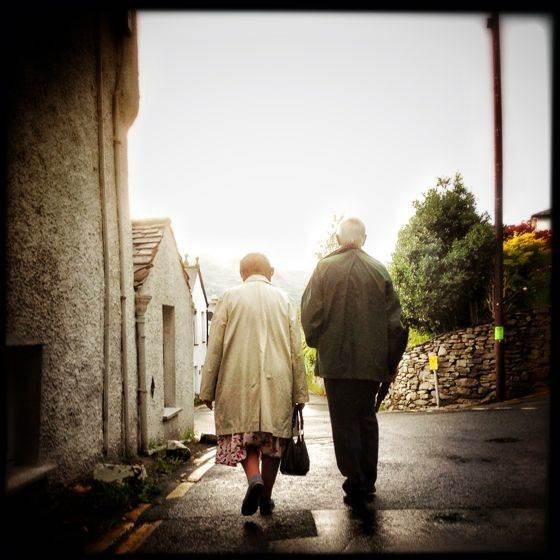 Around the same time that I launched the website a friend showed me a project he was working on to develop a magazine for the iPad. It blew me away and seemed like a perfect companion to the website idea. The magazine launched in April this year and has been growing in popularity.

What’s covered inside this magazine, and how can we subscribe?

The magazine basically covers anything to do with mobile photography from how to guides, articles about top tips and tutorials, interviews with talented artists, app and accessory reviews as well as a gallery showcase of people’s work from the Mobiography Flickr group. The aim is to provide something of interest for everyone.

At the moment, the mag is bi-monthly but I have plans to push out special one off subscriber only editions in between the main issues. These would be shorter than the main issue but focused more towards a single topic or showcase of people’s photographic work and the stories behind their images. 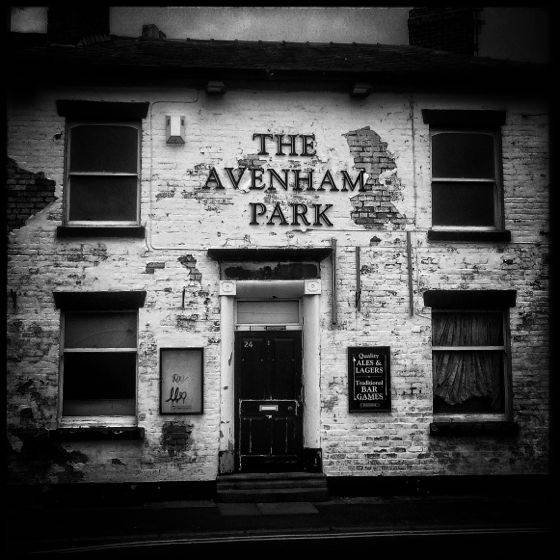 The magazine is available on the iPad and iPhone. To subscribe head over to the App Store, then download and install the app. From there you can either buy individual issues or subscribe by tapping on the yellow subscribe button to get all future issues and access to special subscriber only editions which will be automatically available on your mobile device when released.

You’ve interviewed many great iPhoneographers. What is your favorite interview question and could you answer it for us?

Blimey that is a tough one.

There are quite a few questions that I often ask. I like to use interviews as an opportunity to find out more about the lives of the photographer in question and the stories behind their work. I see it as a perfect opportunity to learn something from their approach to photography and views. 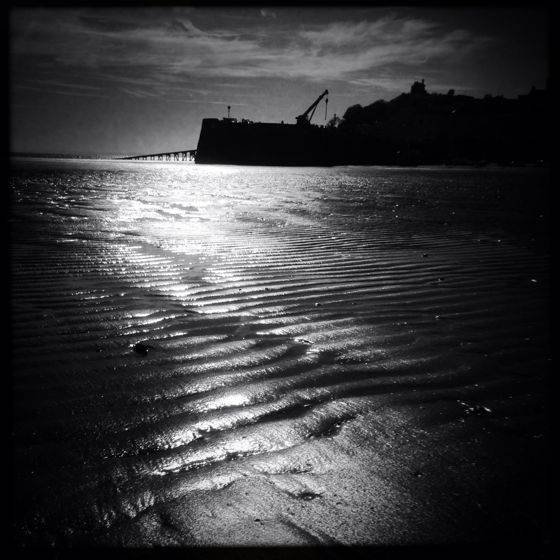 I often try to finish with an open ended question such as ‘Is there anything else you would like to share. Do you have any future plans for your photographic activities?’

Often I get the answer ‘No, not really, that’s about it. Thank you for this opportunity’ but sometimes you get an unexpected answer such as the interview I did with street photographer Tracey Renehan where she spoke of plans to put together an auction of work by mobile photographers to raise money to help rehabilitate rescued women and children. The response in the comments was amazing with offers of support from people offering to put forward their photographs in aid of the cause. 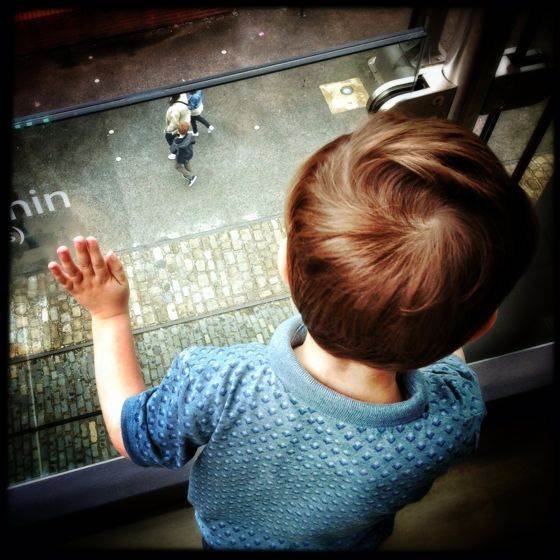 If I were to answer this question myself I would have to say it would be good to meet up with some of the photographers I have been making friends with online and do some sort of collaborative project together.

I’m also looking to further develop the Mobiography website and magazine and start contributing to other websites in the mobile photography space such as We Are Juxt. It will be interesting to see where this path leads. 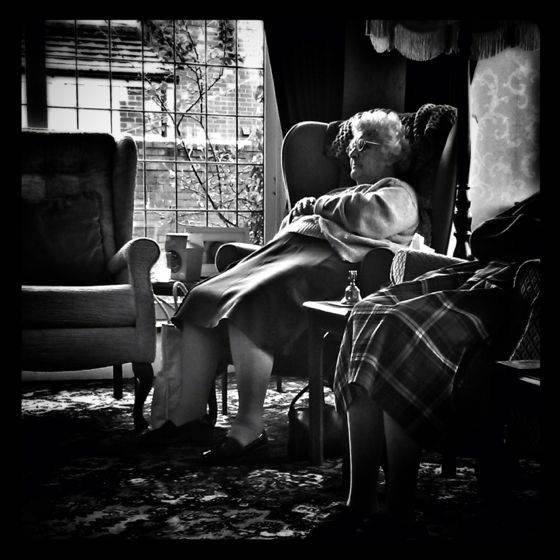 I’d like to ask if there are any mobile photographers or bloggers out there who are interested in getting involved with the Mobiography project then get in touch and let me know your ideas.

What are your favorite iPhone apps for shooting and editing?

For shooting I tend to use various camera apps depending on how I feel, the situation and results I am looking to achieve. I tend to alternate between Camera+, ProCamera, Oggl and more recently the VSCO app.

I’m a bit of an Oggl fan though. I like the fact that you can change the film and lens combinations after you’ve taken the photo, something you can’t do in the native Hipstamatic app and that you can also now import photos from your camera roll. 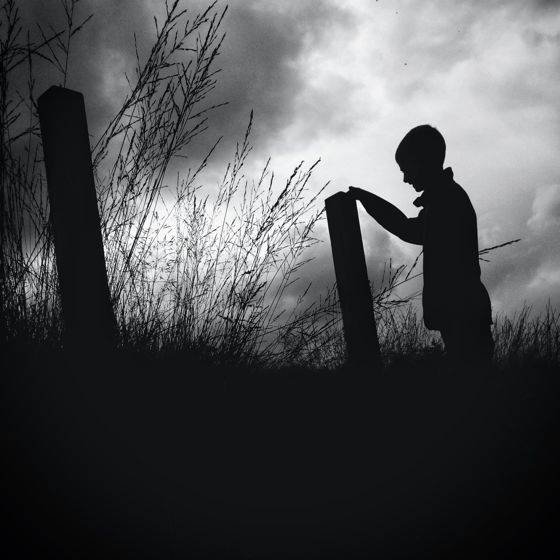 For editing I tend to use Snapseed on the iPad as I find it much easier than on the iPhone. I like being able to see and compare the changes I make no matter how subtle. My eyes probably aren’t as good as they use to be (god that makes me sound old).

What advice do you have for novice iPhoneographers who want to start taking creative photos with the iPhone? 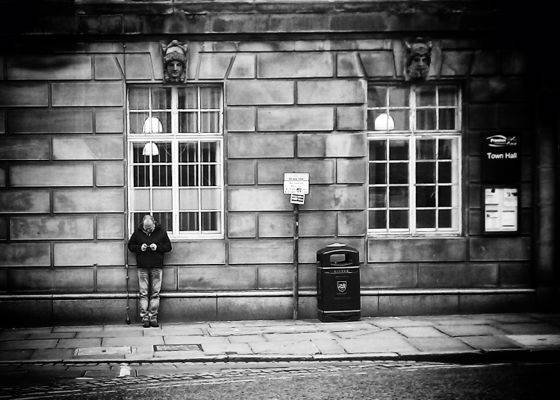 I also think social media plays a key role in today’s mobile photography so I’d advise people to get involved in a community such as Flickr, Instagram or EyeEm. Use these communities to post your work, connect with other like-minded people and get inspiration. There are many great photographers out there and these communities enable you to access their work on the move and get inspired wherever you are.

Could you briefly explain the story and editing behind your three favorite iPhone photos?

Two of my three favorite photos were taken on a family holiday we took this year to a place called Tenby in South Wales. I went on holiday there many times as a child so it holds a lot of fond memories for me. It was the first time in a long time that I had been totally relaxed and away from work and the usual routine. It was also the first holiday I had gone totally iPhone with no DSLR in sight. 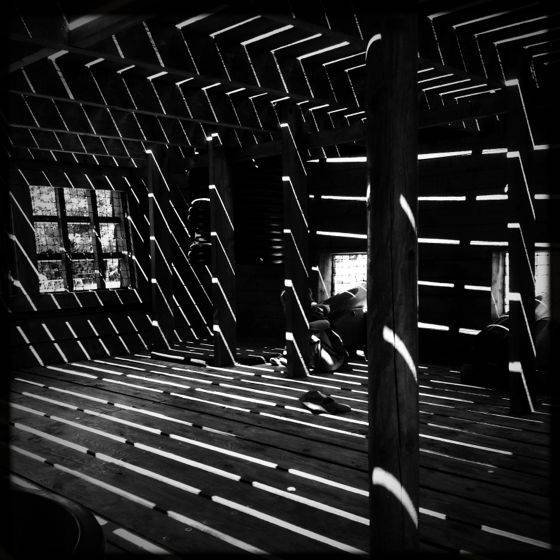 My son was running wild around a children’s play park which was in the shape of an old pirate ship. It was a very hot and sunny day (somewhat unusual for the UK in summer). As I crawled around on one of the lower decks I was struck by the strong shafts of light streaming in through the gaps in the deck above. It was an extremely unusual and striking effect. It was shot with Oggl using Blackkeys SuperGrain film and Jane lens. 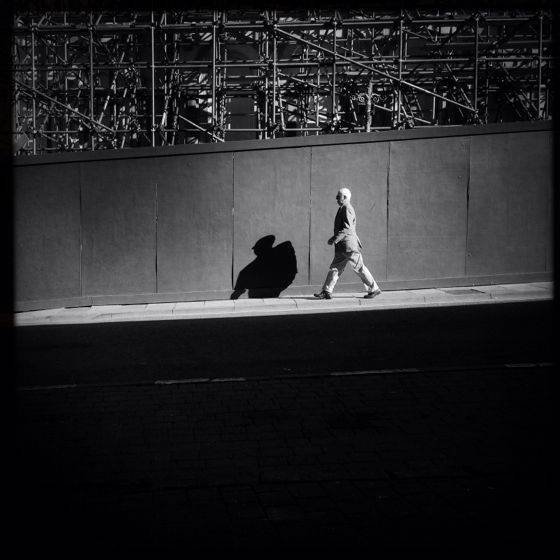 I was out on an early morning photo walk which I like to do when on holiday. I was sat on a bench looking at the old cinema reminiscing about the films we watched there as children on many a rainy day. Sadly the cinema was in the process of being demolished to make way for a new hotel.

As I sat on the bench I would casually shoot people as they walked past. I love the light, the shadows and composition of this shot. It is a simple shot but has been one my most popular photographs on Flickr and Oggl. It was shot with Oggl using Blackkeys SuperGrain film and Jane lens. 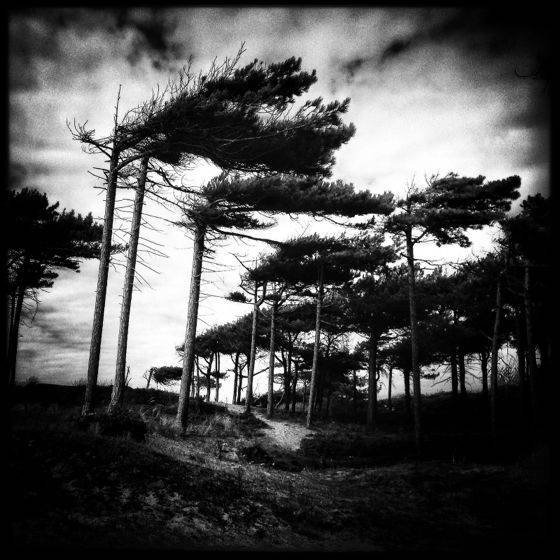 “Trees are poems the earth writes upon the sky”

This shot was taken while out for a walk at a nearby National Trust conversation area. The forest is populated with pine trees and is home to the UK’s red squirrel. Near to the beach side of the forest there are quite a few unusual looking trees amongst the sand dunes. They are pretty sparse except for their strange tops which seem to be growing sideways. I like their unusual shape and the dark, grainy, black and white feel to this photograph. It was shot with ProCamera and edited in the Snapseed app.

Which iPhone photographers do you respect the most?

Without a doubt Richard Koci Hernandez. I’m in awe of his passion for photography, his teachings and the way he consistently produces such great work. It was an honor to be able to interview him a while back for the magazine. I learnt a lot from his approach and views.

I’m also a big fan of Mark T Simmons and Dilshad Corleone, two people who I have had the pleasure of getting to know and can now call friends. Both Mark and Dilshad are masters of composition and consistently produce striking images that tell a story. Honestly the list of people I respect and look up to goes on, Shel Serkin, John Fullard from New York and Albion Harrison-Naish to name but a few.

What are your impressions about the new iPhones?

I don’t have one of the new iPhones myself. I use an iPhone 5 but from what I have seen and heard about it, it sounds like a logical and very exciting advancement in mobile camera technology. I think that with the improvements in the sensor, the higher dynamic range especially in low lighting conditions and with better pixel quality it will move mobile cameras closer to being seen as an equal to the traditional point and shoot. 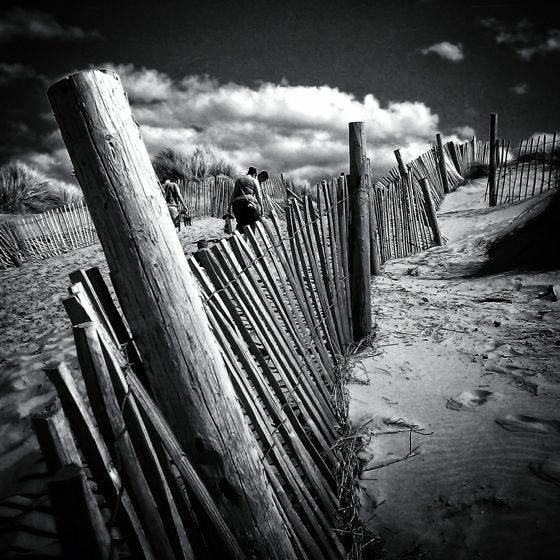 Where do you think mobile photography is headed in the future?

I think it is an area that has been rapidly growing in popularity for some time now and will surely explode especially as the technology continues to develop. I see more and more people out taking pictures with their mobile phones, I see people using Instagram on the bus and I see TV adverts selling the unique camera features of the latest mobile phones.

I think the combination of having an accessible capture device to hand and the ability to share photos in real time is an amazing thing. It truly is an exciting time to be in mobile photography and I feel this is just the beginning.